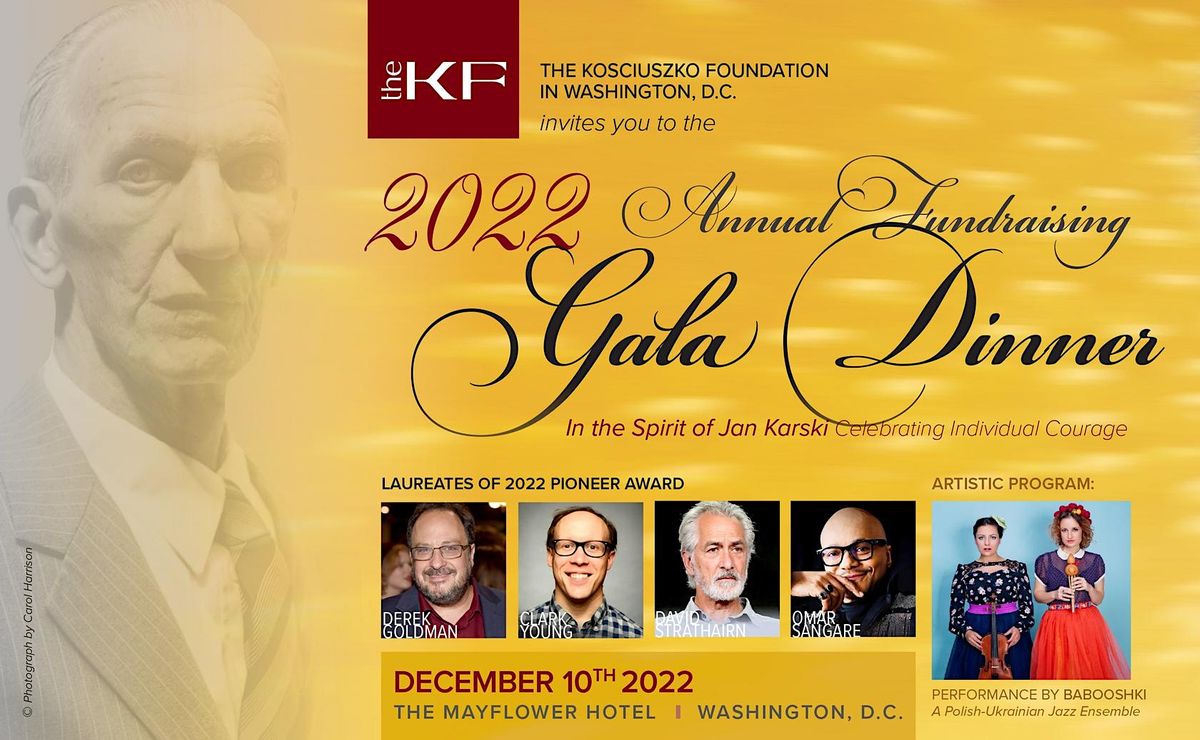 Advertisement
Please join us at the Annual Kosciuszko Foundation 2022 Gala Dinner!
About this Event

IN THE SPIRIT OF JAN KARSKI

We will honor the creators of the play and now also film: Remember this. The Lesson of Jan Karski:

To book a room at the Mayflower Hotel with a special discount for the 2022 KF Gala please click here:

Laureates of the KF 2022 Pioneer Awards:

Derek Goldman is Artistic and Executive Director and co-Founder of the Laboratory for Global Performance and Politics (The Lab) at Georgetown University, with the mission of humanizing global politics through the power of performance. He is an award-winning stage director, playwright/adapter, scholar, producer, and developer of new work, whose work has been seen throughout the US, off-Broadway, and internationally at leading venues such as Shakespeare Theater Company, Steppenwolf, Lincoln Center, Kennedy Center, Arena Stage, Baltimore CenterStage, Folger, Ford's Theater, Chicago Shakespeare, and many others. Over 18 years at Georgetown, he has served as Chair of the Department of Performing Arts, Director of the Theater & Performance Studies Program and Artistic Director of the Davis Performing Arts Center, and he also holds a joint appointment as Professor of Culture, Politics & Global Performance in GU's School of Foreign Service. He is the author of more than 30 professionally produced plays and adaptations and he has directed over 100 productions. His engagement with global performance in recent years has taken his work to Sudan, Cambodia, Bangladesh, China, Poland, South Africa, Australia, Peru, Japan, Bulgaria, Armenia, Chile, the Czech Republic, Italy, Spain, Argentina, France, and throughout the UK, among other places. He is a member of the Board of Directors of Theatre Communications Group (TCG); Vice-President of UNESCO's International Theatre Institute, and Founding Director of the Global Network of Higher Education in the Performing Arts. He holds a Ph.D. in Performance Studies from Northwestern University, and he received the President's Award for Distinguished Scholar-Teachers at Georgetown and the Provost's Award for Innovation in Teaching for his work as creator of In Your Shoes, an internationally recognized groundbreaking model for using performance to counter polarization. He is the director and co-author of the internationally celebrated production Remember This: The Lesson of Jan Karski, starring David Strathairn, as well as co-director of the feature film adaptation Remember This.

Clark Young is a writer and teacher based in Brooklyn. He co-created every iteration of Remember This: The Lesson of Jan Karski from Warsaw and New York City to London and Washington DC. A Georgetown University graduate, Clark was awarded the Terrance Davis Medal for Excellence in Theater and Performance Studies. He went on to gain his master's degree at NYU Tisch School of the Arts, where he was also recognized for academic excellence in the field of Performance Studies. He has since taught theater at Georgetown and Bronx Lighthouse College Prep Academy. As an actor, he has appeared in over twenty professional productions. Clark is currently workshopping his new play, .406 Below, about cryonics, baseball, family, and immortality.

David Strathairn is an acclaimed film, theater, and television actor and performer, the Oscar nominee and the Emmy award recipient. His best known roles include "Good Night, and Good Luck" (2005), "The Bourne Ultimatum" (2007) and recent "Nomadland" (2020) and "Nightmare alley" (2011). Mr Strathairn performed over 30 theatrical roles and has been involved with experimental theater. His most recent performance was a solo performance of Jan Karski "Remember This: The Lesson of Jan Karski."

Strathairn has also worked extensively in television, and first became familiar to television viewers as the title character's boss in the series The Days and Nights of Molly Dodd (1987). In addition to narration work for many PBS shows, Strathairn has appeared in the TV series Big Apple (2001), The Sopranos (1999), Monk (2002), and headed the cast of the science-fiction series Alphas (2011). His work in television films has brought him an Emmy Award for Temple Grandin (2010) and an Emmy nominations for Hemingway & Gellhorn (2012).

Omar Sangare is one of most influential people in theatre. Dr. Sangare graduated from the National Academy of Dramatic Art in Warsaw, Poland, where he studied with the Oscar-winning director, Andrzej Wajda. He was awarded a scholarship to The British American Drama Academy in Oxford, England. While there, he worked with Derek Jacobi, Alan Rickman, Michael Kahn, and Jeremy Irons. He holds many film, television, and radio credits. For his one-man drama "True Theater Critic," he was voted The Best in Acting by The New York International Fringe Festival. The New York press acclaimed his lead part in the Arena Players Repertory Theater production of "Othello." Barbara Delatiner wrote for "The New York Times"—"Omar Sangare was born to play Othello!" His published six books and many essays and articles for various magazines and newspapers. He was selected by the U.S. Department of State for a video project that appeared as part of President Obama's trip to Poland. Dr. Sangare is a founder and artistic director of UNITED SOLO, the world's largest solo theatre festival, a resident company at Theatre Row on 42nd Street in New York City. Omar Sangare was born to present his talents internationally through a thriving career as an actor, director, writer, producer, educator, and philanthropist. In 2009 he received the Red Cross Diploma for his charity service and contributions over the years. He is a proud father of his son, Maximilian Sangare. 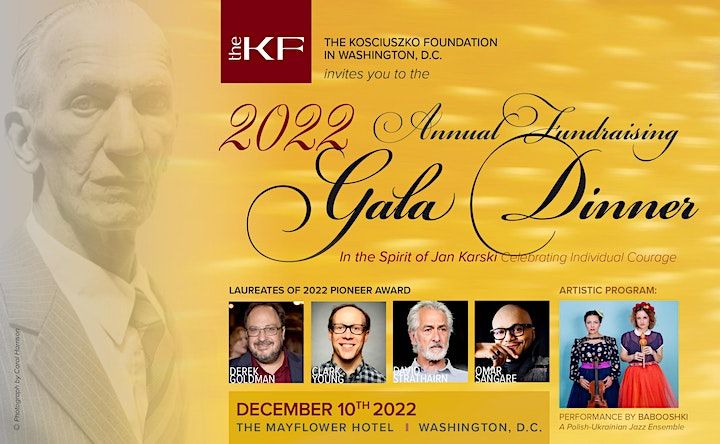