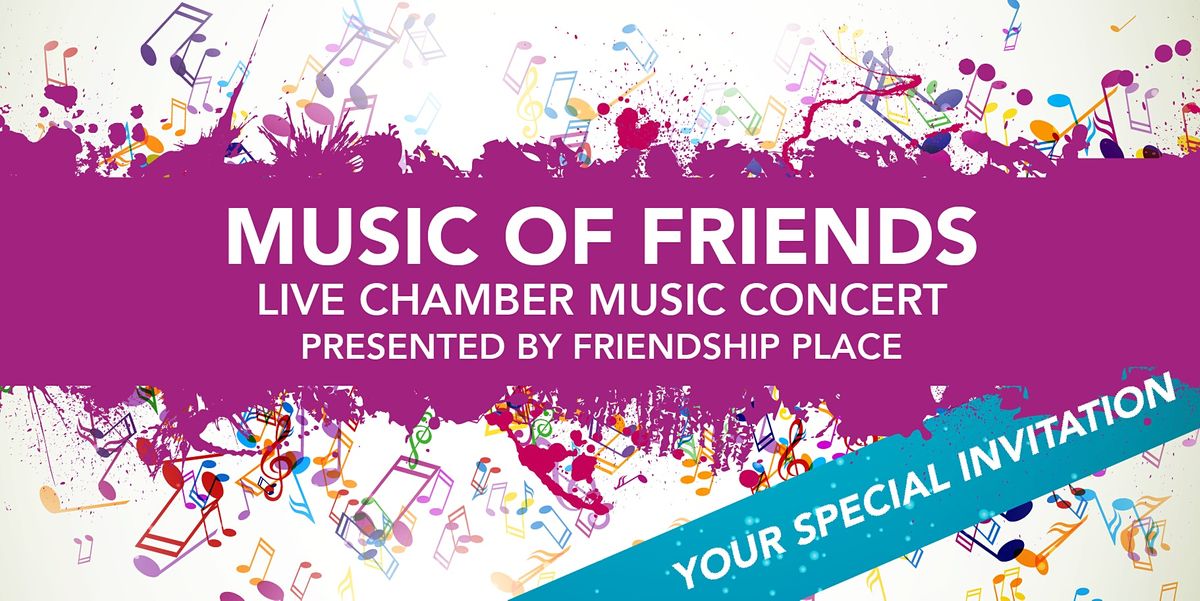 Advertisement
Join us LIVE! for a magical Sunday afternoon by experiencing the best in chamber music concert at the French Embassy.
About this Event

Enjoy the perfect Sunday afternoon by experiencing the best in chamber music at the “Music of Friends” concert, in support of Friendship Place, Washington’s premier organization serving people experiencing homelessness.

Music of Friends will be held at the French Embassy's beautiful campus and will feature nationally acclaimed musicians playing an array of short chamber music selections. Our event's musicians hail from organizations such as the National Symphony Orchestra, the Eclipse Chamber Orchestra, and the Kennedy Center Opera House Orchestra.

Cecilia Cho, pianist, is currently on the faculty of the Levine School of Music. She has performed as a chamber musician internationally and locally with the Mt. Vernon Chamber Players, lBlS and the Fessenden Ensemble.

Paul Cigan, clarinetist, has been the Second Clarinet with the National Symphony Orchestra since 1999. He also serves on the faculty of the University of Maryland. Mr. Cigan is a graduate of Temple University where he studied with Anthony Gigliotti.

Theresa Wells Cigan, clarinetist, is currently in her eighth season as Principal Clarinet of Opera on the James in Lynchburg, VA and is an active free-lance musician in the Washington area, performing regularly with the National Symphony Orchestra, the Eclipse Chamber Orchestra, Bel Cantanti Opera, the Kennedy Center Opera House Orchestra and the Smithsonian Chamber Orchestra.

Eric deWaardt, violist, joined the National Symphony Orchestra in 1986. Mr. deWaardt has performed as soloist with the Eclipse Chamber Orchestra and has been the featured artist on chamber music concerts at the Embassy of the Netherlands. Mr. deWaardt was a founding member of the National Gallery String Quartet.

Carole Tafoya Evans, violinist, has been a member of the National Symphony Orchestra since 2001. She has performed as a member of the Fessenden Ensemble and the Eclipse Chamber Orchestra and on the Church of the Epiphany's Tuesday Concert Series, the NSO's Prelude Series on the Millennium Stage and in the Terrace Theater of the Kennedy Center. Ms. Evans is a coach and teacher for the NSO's Fellowship Program and Summer Music lnstitute. She holds both Bachelor and Master of Music degrees from lndiana University School of Music where she held a Graduate Teaching Assistantship. Her teachers have included Josef Gingold and Yuval Yaron.

Mark Evans, cellist, has been a member of the National Symphony Orchestra since 1998. Mr. Evans has appeared as a soloist with Eclipse Chamber Orchestra and the NSO at Wolf Trap. An active chamber musician, Mr. Evans has performed with the National Chamber Players, the Fessenden Ensemble, Sunday's at Three Chamber Music Series, the NSO's Prelude Series on the Millennium Stage and in the Terrace Theater of the Kennedy Center. He holds degrees from Yale University and the Indiana University School of Music where he was awarded the Prestigious Performer's Certificate. His teachers include Fritz Magg, Janos Starker and Aldo Parisot.

Charlie Nilles, bassist, is a bassist with the National Symphony Orchestra and hails from Chicago. He received his Bachelors and Masters degrees from Rice University. His teachers have included Paul Ellison, David Moore, Chris Hanulik, Rob Kassinger, Virginia Dixon, and Tanya Carey. In addition to performing with many of the nation's top orchestras, Mr. Nilles has held titled positions at the Aspen Music Festival and the Schleswig Holstein Musik Festival. Outside of classical music, he has recorded, toured, and/or performed with Marc Colby, Terrell Stafford, Victor Goines, Larry Corryell, Ruben Alverez, Michael Bolton, Jerry Streinhilber, Trey Anastasio, Cynthia Clawson, and others.