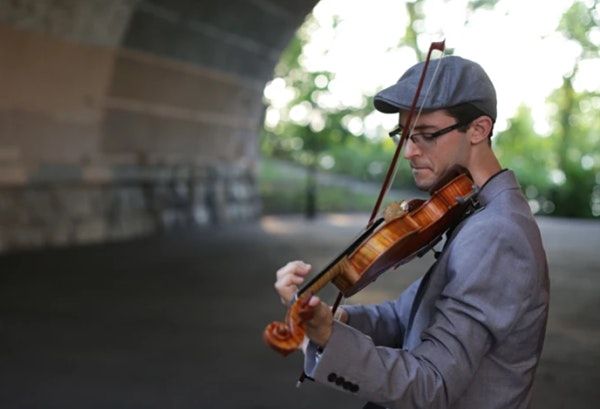 Please join us on April 20, 2022 as we welcome violinist Ben Sutin in a celebration of the late John Blake Jr., 75th birthday to Fellowship Hall. Showtime is 7:30 p.m.

Tickets: $20 at the door, $15 online in advance at Eventbrite. Students admission is $5 with ID and children under 12 years old get in for free! But you must register at Eventbrite.

MASKS ARE REQUIRED. PROOF OF VACCINATION IS REQUIRED.

This venue has limited seating capacity, so buy your ticket in advance and early to avoid a sell-out.

“Motivated by a diverse musical palate and burning passion to connect with people of all creeds through his music, Benjamin Sutin has been residing in New York City for just under ten years where he has made a mark as an eclectic, diverse and sought-after violinist, violist, pianist and composer in a host of musical genres including jazz, Latin jazz, rock and klezmer, all of which has inspired his own original music.”

After being enamored by the vocal qualities of the violin, Benjamin began studying Suzuki violin at age five, adding piano just a few years later. His career began to blossom when he started showing an interest in jazz, just months before his 13th birthday.

It all started with a summer long workshop with saxophonist, Odean Pope at the famed Philadelphia Clef Club of Jazz in Philadelphia, the only education institution at the time willing to accept a violinist into their program. Soon after, Benjamin started studying privately with legendary jazz violinist John Blake Jr. among other Philadelphia based jazz luminaries on faculty at the Clef Club.

Sutin joined Bobby Sanabria's Multiverse Big Band in 2017 for the recording of their now Grammy Nominated and Jazz Journalist Association's "Record of The Year" album, West Side Story Reimagined. He is now a regular member of the group, as well a frequent on-call sub for multiple salsa bands throughout NYC.

Sutin graduated from Manhattan School of Music in 2015 with a BM in Jazz Violin Performance.

John Blake, Jr. was one of the world’s leading jazz violinists for over four decades. Classically trained, Blake first gained recognition on early-'70s recordings he made with Archie Shepp and in the mid-70s became established with a global audience during three years recording and touring as a member of Grover Washington, Jr.’s popular “crossover” jazz band.

He then spent five years working extensively as a member of various ensembles led by pianist McCoy Tyner. Among other artists with whom Blake has performed and/or recorded with were the Duke Ellington Orchestra, Turtle Island String Quartet, Quartet Indigo, the Steve Turre Sextet, the Billy Taylor Trio, Avery Sharpe, Cecil McBee, Jay Hoggard and James Newton.

Jazz Bridge, an award-winning nonprofit dedicated to assisting Greater Philadelphia Metro area jazz and blues musicians and vocalists in times of crisis, sponsors these neighborhood concerts throughout the region to keep the sound of Philadelphia alive.