Jesus House for All The Nations | London 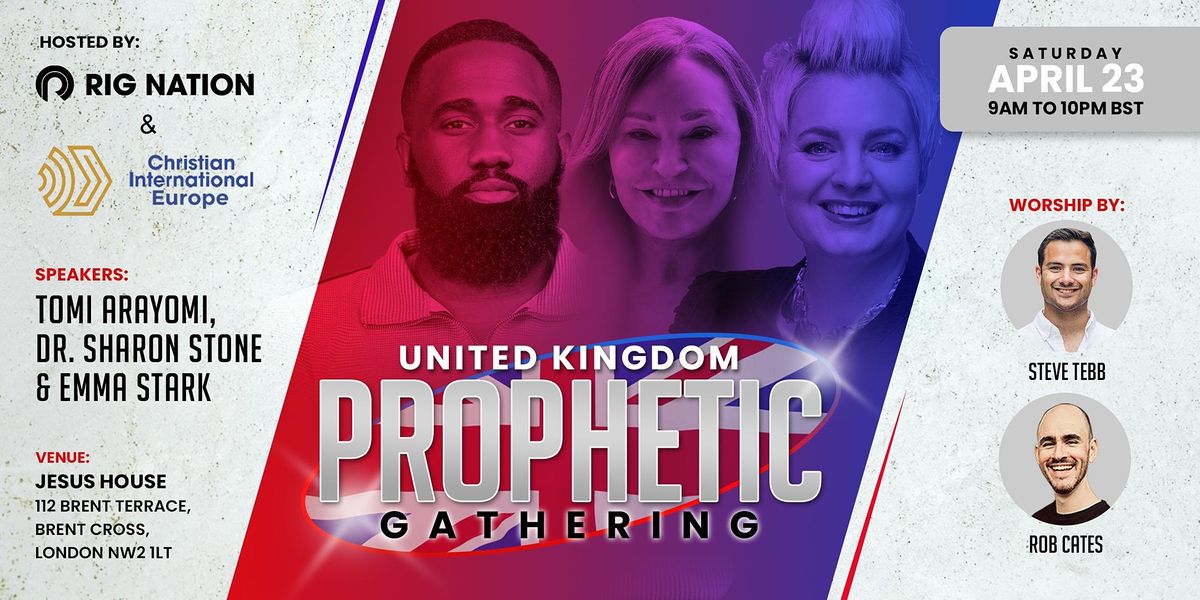 The United Kingdom is READY for a prophetic awakening!
Are YOU ready?

Join with us for our first United Kingdom Prophetic Gathering in London with Prophets Dr Sharon Stone, Emma Stark and Tomi Arayomi - each an established and recognised international prophet and committed to raising up others to hear the voice of God.

This will be a remarkable time of prophetic insight, prophetic encounter, mentoring and training.

Entry is strictly by Eventbrite ticket only.

DR SHARON STONE has pioneered Christian International in Europe over 24 years. She is referred to affectionately as “Europe’s Prophet”. The first thing others say of Sharon is that she sees the best and brings out greatness in others. They attribute this to her prophetic precision and an approachable life. Sharon pastors, ministers at conferences and hosts a monthly “Mentoring Day”. In her travels, leaders of Ministries and Government regularly seek consultation. But the highest tangible strength upon Dr. Sharon is her ability to raise and launch other Prophets to national and international influence (Oh how the world needs this)! Dr. Bill Hamon has publicly referred to her as one of the Top three most accurate prophets.

EMMA STARK is a prophet who operates with authority and authenticity as she ministers and teaches around the world, giving clear and direct prophetic input to leaders, churches and ministries, equipping the body of Christ to better hear from God and to apply His revelation to transform lives, communities, cities and nations. When Emma founded Glasgow Prophetic Centre with her husband, David, her aim was simple: ‘listen to God more – and help other people do the same’. Now she does this on a big scale wherever she goes, as a church leader with an apostolic call, an international speaker of authority and a prophet to nations. Over the years, Emma has been a successful corporate business manager, a media spokesperson, a trained counsellor and a student leader. David and Emma have been involved in leading healing ministries at the local and national level for many years and they have apostolic responsibility for a variety of ministries, ministers and Kingdom businesses.

TOMI ARAYOMI is a governmental prophet with more than 20 years experience in prophetic ministry. His desire is to bring forth the authenticity and integrity of the prophetic and its power to change lives all over the world. He has had the privilege of consulting prophetically with leaders of nations in their homes at the United Nations and in Parliament. He has featured on mainstream media including BBC, Revelation TV, the Times Malawi, TBN, Channels TV where he has been recognized for his national and personal prophetic accuracy. Tomi is the founder and apostolic leader of RIG Nation. RIG stands for Restoring Issachar's Generation, a mission based on 1 Chronicles 12:32. The ministry vision is to restore the apostolic and prophetic ministry back into the Body of Christ and to equip this generation to be in a position and condition for use by God. Tomi is the author of nine books, the most recent being “Eat, Sleep, Prophesy, Repeat” and “The Cosmopolitan Christian”. Tomi and his wife Tahmar have three beautiful sons, Harvey, Perez and Silas. After hearing a word from the Lord, the family recently relocated to Nigeria from the United Kingdom.

STEVE TEBB has a heart to see the true worshipers of God being awakened in the global body with fresh fire and love for Jesus, through corporate worship. His desire is that it would lead to lives healed, set free, delivered, transformed and renewed by the glory of God, to carry out the gospel and Kingdom on earth. His greatest passion is to see the Great Commandment fulfilled through the prizing of intimacy and the pursuit of God’s presence becoming a daily reality for the Church. Steve has been leading worship for over 15 years and travels full time as an Itinerant Worship Leader to different Churches, ministries and events around the UK and also internationally to the nations, leading worship, as well as speaking, equipping and training teams. Steve is also in the process of recording and releasing more music. He spent the last few years signed to Catch The Fire Music and featured on 2 of their albums ‘Presence – Live In Toronto‘ and ‘Revival 25’. He is soon to be releasing His debut instrumental album ‘Beyond The Veil’, in April 2022.

ROB CATES is a UK national prophet with a passion for intimacy with God, the Kingdom of God, arts, business and government. He is a member of the British Isles Council of Prophets, Global Prophetic Alliance, and European Prophetic Summit. Rob is a member of MyChurch Windsor and has the privilege to be mentored by Dr. Sharon Stone and Emma Stark. He is the founder of Reformation Rising, a development programme for apostolic-prophetic reformers called to the Seven Mountains of Influence. The current group of Rising Reformers are bringing transformation to business, the music industry, third-sector, government and NHS. Rob works as a vocal coach, vocal health practitioner and is one of only a handful of elite vocal professionals in the UK accredited by Vocology in Practice. His diverse portfolio of clients include musical theatre singers in the West End, recording artists, worship leaders and enthusiastic amateurs.