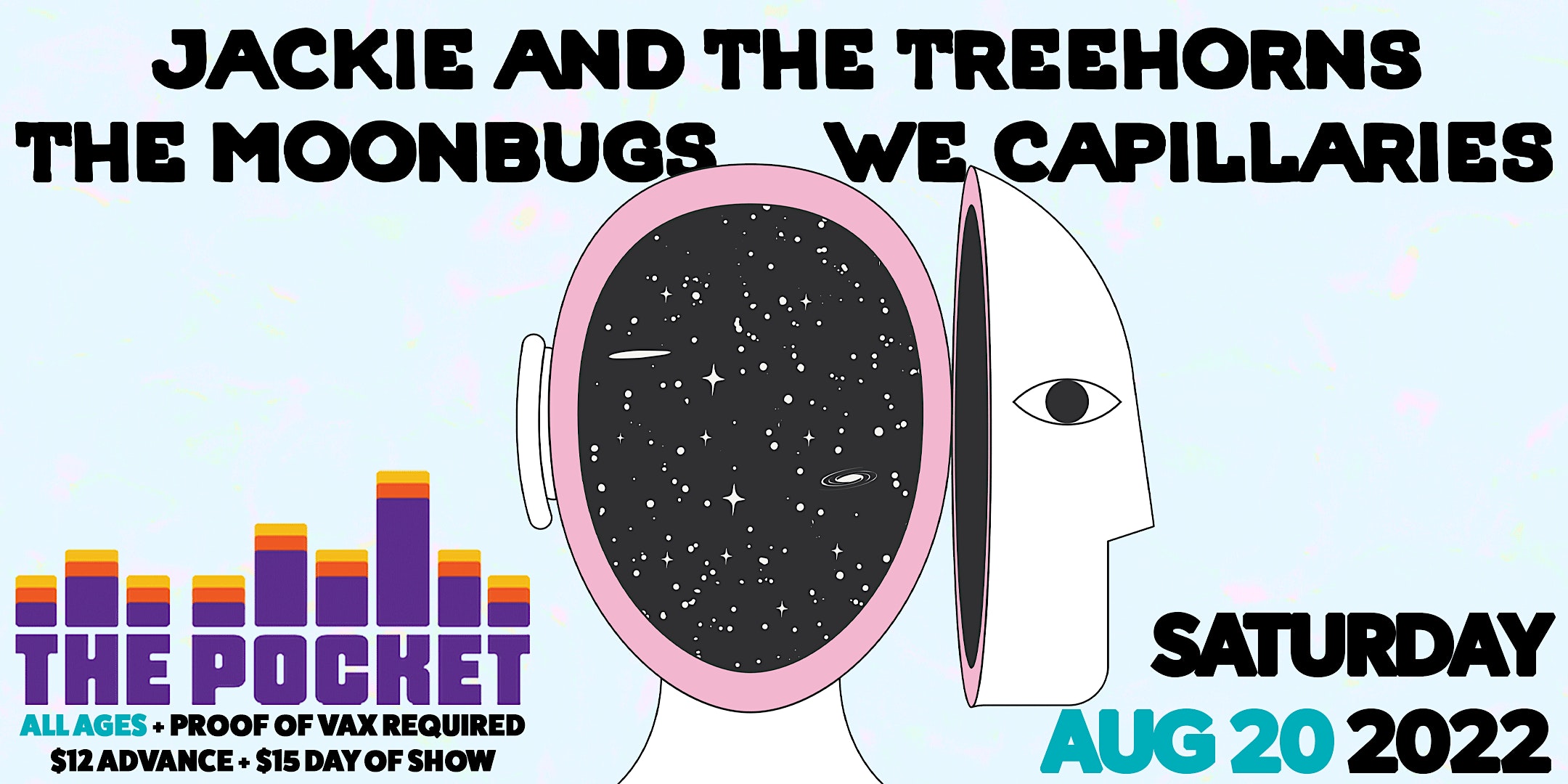 Advertisement
The Pocket Presents: Jackie and The Treehorns w/ The Moonbugs + We Capillaries
About this Event

Rooted in the basic tenets of rock, Jackie and The Treehorns create music from just outside the nation’s capital in Alexandria, VA and just outside the mainstream. Formed in 2009 and fronted by Steven Rubin under the guise of an altered ego (Jackie) and his band (The Treehorns) the group fight to keep the flames of the rock and/or roll fire lit with inspired original inventiveness. Jackie and The Treehorns’ music covers a wide sonic palate, taking the listener down familiar paths before detouring towards parts unknown, while Jackie’s lyrics explore topics ranging from celebrity stalkers, robots, serial killers, and hitchhikers to odd phenomena like UFO’s, déjà vu, ghosts, and extraterrestrial party favors. The bands most recent releases, Made You Run (2021), Hidden Cameras (2020) and It’s Never Too Late (2019), were recorded at Ivakota Studios in Washington, DC with Ben Green. For their previous releases, The J. Album (2018), singles Writer and A World Gone Mad (2017), RU4REAL? (2016), and Do You Mind If I Wear A Clown Mask? (2015) the band worked with legendary engineer Don Zientara at the famed Inner Ear Studio in Arlington, VA.

Transforming noise into music is what The Moonbugs are all about. They are heavily influenced by bands like The Beatles, The Cure, Radiohead, and Ride to name a few, but The Moonbugs’ music still stands on its own. Writing songs with elements of psychedelia, guitar driven, hypnotic bass lines, and pleasing beats. Fused together, creates the Moonbugs sound.

We Capillaries was assembled to perform the unique sounding, weirdo rock songs of guitarist and vocalist Pierre Davis. They have played Fort Reno, Songbyrd, DC9 and Galaxy Hut over the past five years. Wild saxophone from Jimmy Kreutzer adds color to the rhythm section of Marco Morales and Davis White, who have each played in a long list of local bands. We Capillaries have recently finished recording a new batch of songs, awaiting mixing and release.