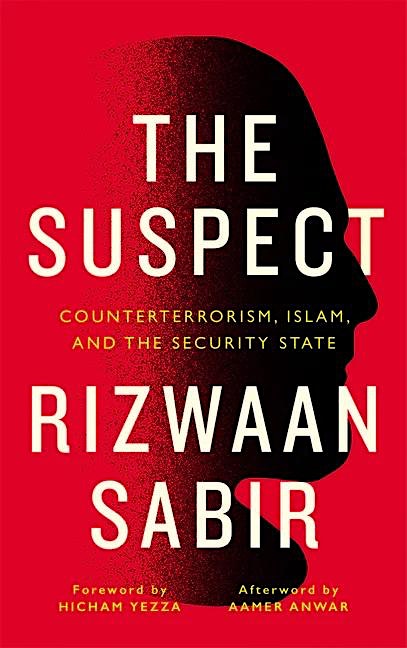 Advertisement
What impact has two decades' worth of policing and counterterrorism had on the state of mind of Muslims in Britain?
About this Event

What impact has two decades' worth of policing and counterterrorism had on the state of mind of Muslims in Britain? The Suspect: Counterterrorism, Islam and the Security State (2022) draws on the author’s lived experiences of being suspected of terrorism to take the reader on a journey through British counterterrorism practices and the policing of Muslims.

Rizwaan Sabir describes what led to his arrest for suspected terrorism, his time in detention, and the surveillance he was subjected to on release from custody, including stop and search at the roadside, detentions at the border, and monitoring by police and government departments throughout his research.

Writing publicly for the first time about the traumatising mental health effects of these experiences, he argues that these harmful outcomes are not the result of errors in government planning, but the consequences of using a counterinsurgency warfare approach to surveillance. If we are to break this injustice, we need to resist counterterrorism policy and practice.

Rizwaan Sabir introduces his book and the issues in this Manchester launch with Fatima Munji.

Dr Rizwaan Sabir is a Lecturer (Assistant Professor) in Criminology in the School of Justice Studies at Liverpool John Moores University in the UK and specialises in the study of counterterrorism and counterinsurgency in reference to armed Muslim groups and political Islam. He is the author of “The Suspect: Counterterrorism, Islam, and the Security State” published by Pluto Press in 2022. In addition to providing analysis and commentary in the written and broadcast media for the Guardian, Al-Jazeera, TRT World, and the BBC, he briefs lawyers, community groups, and policy makers at the UK Parliament, United Nations, and the Council of Europe on his areas of research. He tweets at the following handle: @RizwaanSabir. The Suspect is published by Pluto Press.

The event is hosted by Fatima Munji, who is a News Correspondent and regularly reports on a range of national and international stories. Her broadcasting has included telling the story of the migration crisis from the borders of Europe, interviewing victims of ISIS atrocities in Iraq and challenging politicians here in the UK during the referendum campaign. In 2015 she was a finalist for the Royal Television Society's Young Journalist of the Year. During the last General Election she presented Britain's first ever Alternative Election Debate featuring young party leaders facing a live audience on Channel 4.