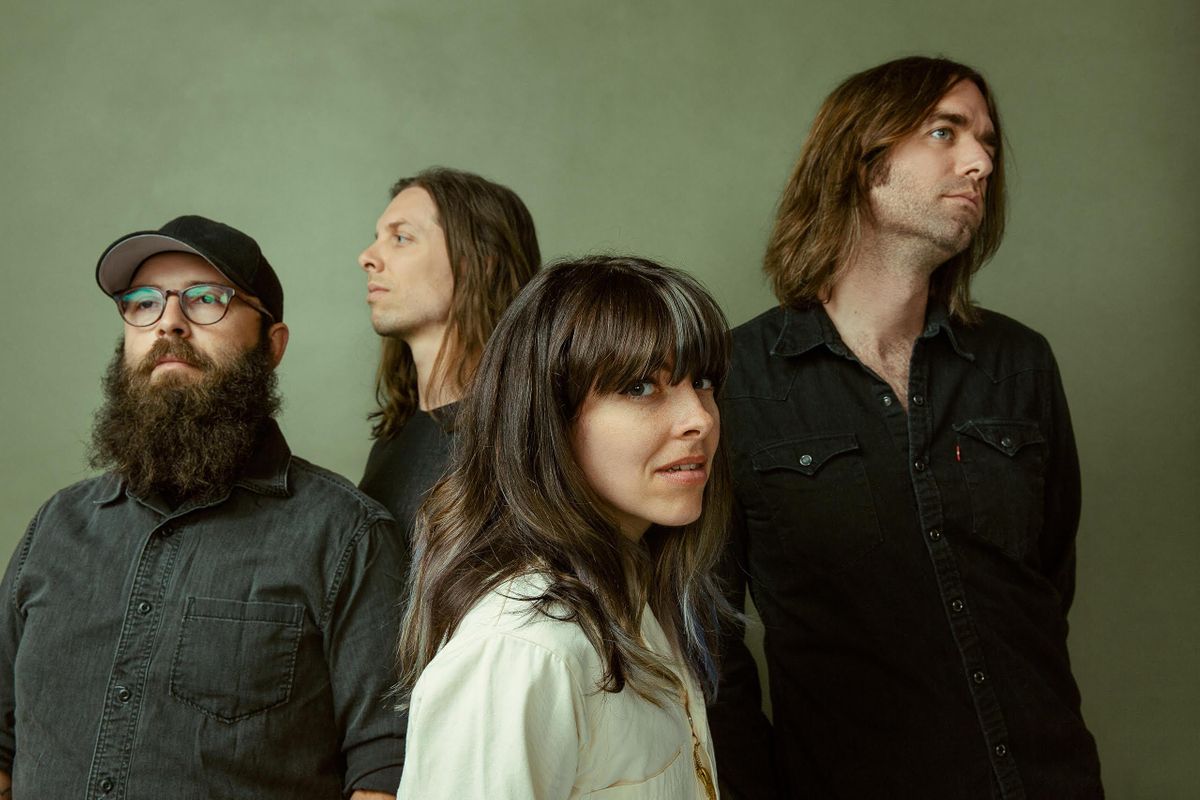 Frances Quinlan has been meditating a lot on power. “When I was younger, I kept thinking that one day I would have a partner and that person would give me power,” she says. “That never came to be.” Instead, what Quinlan, the songwriter, lead vocalist, and rhythm guitarist of Hop Along, has found is that “power has an inherent awfulness to it and people who have it tend to be disappointing in how they wield it.” In this particular moment in history, this thought begs a greater question: what do we do with power and the men who so freely brandish it? “I’m angry that I believed in this false idea for so long, that a man would come along and show me what I was worth.”

This theme propels the Philadelphia-based band’s third studio record, Bark Your Head Off, Dog. Written over the course of 2016 and 2017 and recorded in the summer of the latter year by Quinlan, Tyler Long (bass), Joe Reinhart (guitar), and Mark Quinlan (drums), the album imagines what it’s like to cast off longheld perceptions, often without being certain about the new ones that will replace them. Much like on Hop Along’s first and second records, Get Disowned and Painted Shut, Quinlan seeks in real time to work through these emotions. On Bark Your Head Off, Dog, she also grasps at something more complicated. “Growing up I was constantly in my head and not a part of the world,” she says. “Now I’m trying to force myself into the world.”

Throughout Bark Your Head Off, Dog, one gets the sense that Quinlan is wandering in the thicket of a forest-a state of being that will feel familiar to longtime listeners-and on this outing, she hasn’t left a trail of breadcrumbs behind her. The album’s artwork, which Quinlan painted herself, invites the listener into that forest, as well. “There is a terror in getting lost,” she says, “the woods are at the same time beautiful and horrifying.” This curious wandering gives the album, both lyrically and musically, a heightened dimensionality. On “Somewhere a Judge,” Hop Along explores a dancier side to their sound, while “What the Writer Meant” showcases a string section and enormous, full harmonies. “One That Suits Me” welcomes and embraces the sound of a Rhodes and tambourine, but with a syncopated vocal rhythm on top, almost building to a call-and-response. Throughout, the music is full of gratifying, new deviations.

Bark Your Head Off, Dog is, without question, Hop Along’s most dynamic and textured record yet. Self-produced and recorded at The Headroom in Philadelphia by Reinhart and Kyle Pulley, Bark Your Head Off, Dog features the familiar sounds that have always made the band allergic to genre: grunge, folk, punk, and power pop all appear, with inspiration from ELO to Elvis Costello to ‘70s girl group vocal arrangements. This time around, they’ve added strings, more intricate rhythms, lush harmonies (featuring Thin Lips’ Chrissy Tashjian), along with a momentary visit with a vocoder. In more than one place, Mark Quinlan drums like he’s at a disco with Built to Spill.

“We wanted to get back to using the studio as a writing tool and bring elements of that in,” Reinhart says of the production process. “When you’re sitting there and you force yourself to figure something out, in the studio, there are unlimited possibilities.” This visit to the studio often required a lot of throwing things at Quinlan’s new demos, then scaling them back after the fact. “Why are we doing mandolin? It’s 5am. We have to get on a plane tomorrow,” Reinhart says of the thirty-five day recording process. “But then we ended up keeping it.”

On the album’s opening track, “How Simple,” Quinlan wrangles with what it’s like to learn about yourself-which can get ugly. “People romanticize the idea of finding themselves, but when they do, at least in my experience, it can be really difficult. You see how you fail others and how others fail you.” The theme carries through to “How You Got Your Limp” and “Not Abel,” where Quinlan sings about the ways other people can be disappointing, relative strangers and biblical figures. The record also calls upon references that Quinlan has woven throughout all of the band’s albums: the wild presence of animals (rabbits, foxes, dogs, and blue jays all appear on this record) and historical touchstones (from a podcast on World War I to books by Karl Ove Knausgaard). Hop Along’s songs continue to reveal the curiosities nesting in Quinlan’s mind.

Most significantly, Bark Your Head Off, Dog shows the band at its strongest and most cohesive. Hop Along (which originally began as Quinlan’s solo project under the moniker Hop Along, Queen Ansleis) has never sounded so deliberate, so balanced. “Really, there are four producers in the band,” Reinhart says. “Everybody has ideas. Maybe somebody riffs on this thing, while somebody else says, ‘Let’s do it like that, but backwards.’ The last record was a snapshot of a band becoming a band.” On this record, they are truly that: a band. “Our confidence grew in our ability to express what we mean,” Quinlan says.

“So strange to be shaped by such strange men” is a line that repeats on more than one song on the album. “I’ve been thinking about that a lot. That I just deferred to men throughout my life,” Quinlan says. “But by thinking you’re powerless, you’re really robbing yourself. I’m at a point in my life where I’m saying instead, ‘Well, what can I do?’”

AnnonXL is a pop-leaning singer-songwriter & producer from Philadelphia with heavy roots in R&B/Neo-soul. Annon debuted in 2018 with his Teen Angst project and followed up with the album, Stupid Cupid. The album Stupid Cupid has catapulted Annon into

being known as one of Philly’s best and most unique voices, with its brutality honest lyrics and darkly colored production. In a time of chaos and friction, AnnonXL strives to be the angelic light on the side of the road.

In accordance with Philadelphia's citywide mandate, attendees will be required to show proof of Covid-19 vaccination for entry to all Johnny Brenda's events. Please note that negative PCR / antigen test results will not be accepted. We ask that you bring your vaccination card, a copy of your vaccination card, or a legible photo of your vaccination card on your phone. Full vaccination must be completed at least 14 days prior to the date of the event. If you are unable or unwilling to provide proof of vaccination, we will refund your tickets in full. Please feel free to e-mail us at [email protected].com with any questions or concerns.