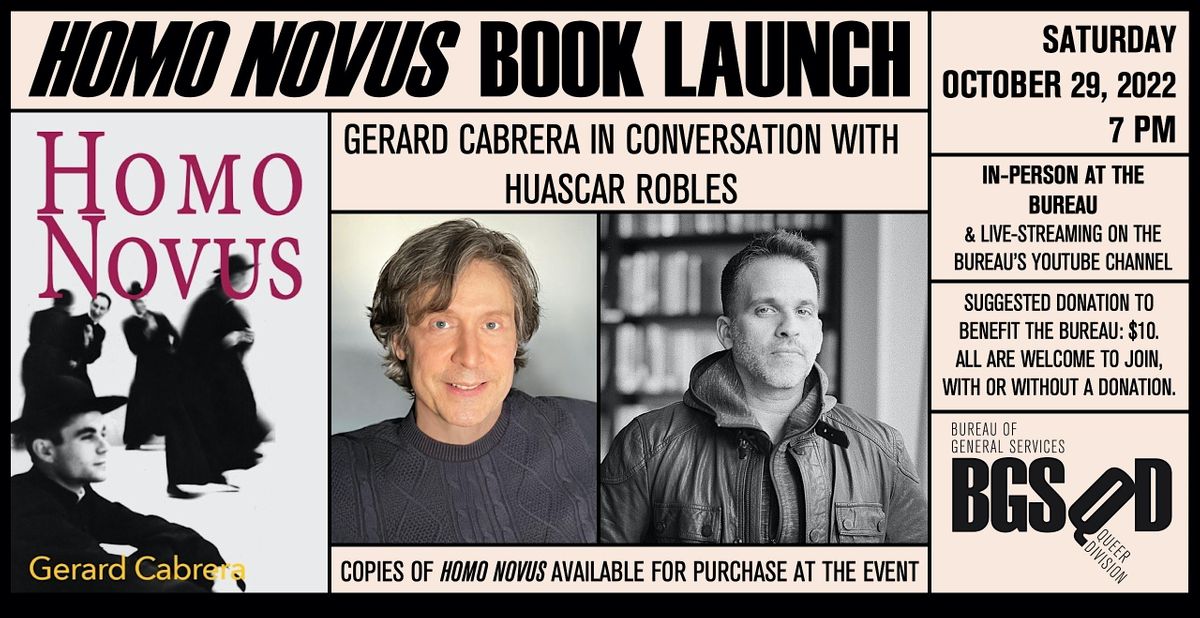 Join debut novelist Gerard Cabrera and author-musician-journalist Huascar Robles for the book launch of Homo Novus.
About this Event

Join debut novelist Gerard Cabrera and author-musician-journalist Huascar Robles for the book launch of Homo Novus. It’s Holy Week 1987, and Fr. Linus Fitzgerald has just learned he has AIDS. Orlando Rosario, the Puerto Rican boy he seduced at fourteen, is now a man sitting by his bed, and studying for the priesthood. In alternating chapters, Linus and Orlando reflect on their desires and dreams, secrets and sins, hopes and faith, and the paths that brought them together. As the narrative progresses, each character reflects on their lives and how their histories have become inextricably bound together by their shared desires, secrets, sins, and faith. By the end of the story, the reader comes away with disturbing and powerful history of transgression and hope for redemption.

Copies of Homo Novus will be available for purchase at the event.

Thank you for supporting the Bureau by purchasing books from us!

Registration is not required. Seating is first come, first served.

All are welcome to attend, with or without donation.

In an effort to prevent the spread of COVID-19:

If you have any symptoms associated with COVID-19 in the days leading up to the event, we ask you to please stay home.

Please note that masks are required at all times inside The LGBT Community Center, where the Bureau is located.

Gerard Cabrera is a Massarican who moved to New York City from Boston in 1989 with no job, no apartment, and no money! It can be done! Over the years he has written for, and served on, the board of directors of Gay Community News, has performed in drag as a member of the United Fruit Company, helped manage one of the first safe sex programs for people with mental disabilities, earned his Master’s degree in public health, competed in the 1994 Gay Games, and earned a law degree. Gerard has stocked shelves, washed dishes, worked in a plastic container factory and on an Old Spice assembly line. He has also represented people in housing court, family court, and probate court. Currently he works in the New York City Family Court. He is a past attendee of the Bread Loaf Writers Conference, The Writers Studio, and was a Bread Loaf Camargo Foundation Fellow in Cassis, France. His fiction has appeared in various print and online journals. His novel, Homo Novus, has been called “stellar,” “emotionally bold and always arresting,” and treats his subject “with rare sensitivity, empathy, and intelligence.”

Huascar Robles is a Puerto Rican author-journalist-photographer-musician who writes about economic, social justice and LGBTQ+ issues in Puerto Rico, the Caribbean and the U.S. His novel Demonios was recently published by Secta de los perros in San Juan, Puerto Rico.