The Mad House Showcase Special with Grant Lyon as seen on Comics Unleashed! 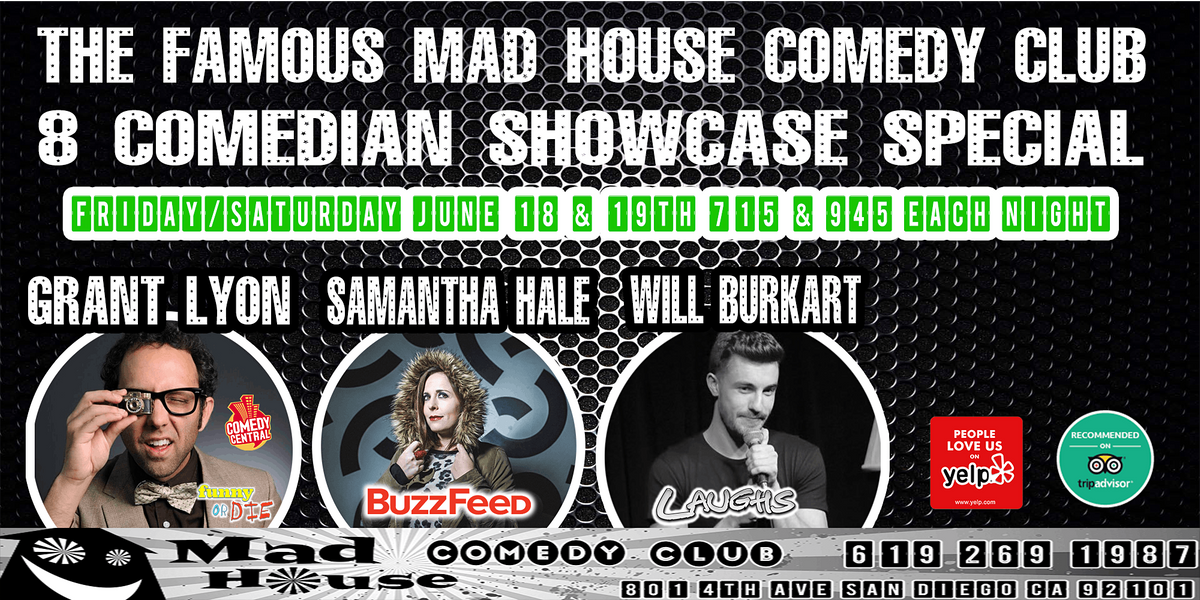 The Mad House Showcase Special with Grant Lyon as seen on Comics Unleashed, Comedy Central, Funny or Die and more!
About this Event

Described by San Francisco Weekly as “a hilariously sharp observer, not one of those tired white-guy bellyachers,” Grant was once a collegiate soccer player. He decided to pursue a career on stage instead of on the field, and that decision’s been rewarded by being chosen as a New Face in comedy at the Just For Laughs Festival, winning the Laughing Skull Comedy Festival, and being a finalist in the Big Sky Festival.

He’s appeared on Comedy Central, Comics Unleashed, SyFy’s series The Movie Show, and he starred in the Amazon Prime feature film Killer Kate! In addition, he’s been a guest on the nationally syndicated Bob and Tom Radio Show and on numerous popular podcasts including Doug Loves Movies. “Scheduled Fun Time,” his comedy album with 800 Pound Gorilla records, hit number #1 and has been featured on numerous SiriusXM channels.

As well as being a contributing writer for the Huffington Post, the film he wrote and starred in, Interview Date, was eligible for a short film Academy Award. Funny or Die, MSN, Huffington Post, and others are among the sites that have featured Grant’s sketch videos on their home pages. You might also recognize him from a number of national commercials including AT&T, Johnsonville Sausage, CiCi’s Pizza, Sam Adams and more

Will Burkart is an LA based comedian who has toured all over the country headlining shows and opening for comedians such as Bobby Lee, Drew Lynch, and Brent Morin. Now a stand up veteran, he has appeared in numerous comedy festivals including San Francisco Sketchfest, and The World Series of Comedy, in which he advanced to the main event. Recently, Will started producing and co-hosting "The Lion's Den Podcast" with Brent Morin & Jason Collings, which has landed such guests as Chris D'Elia and Nick Swardson. You can see Will on stage nightly all over the country, performing his own brand of infectious storytelling about high school blunders, dating stories, and embarrassing mistakes.

Born and raised in Los Angeles, Samantha Hale is following in the comedic footsteps of her grandfather, Alan Hale Jr., best known as The Skipper from Gilligan’s Island. With her unique outlook on life, Samantha likes to push boundaries with her material, and was recently listed on BuzzFeed.com as a “Comedian To Follow.” She hosts and produces a weekly show “Ruthless People” in West Hollywood, was featured on “Laughs” on FOX, and is Co-Host of “The Pandora Boxx Show” on iHeart Radio. Samantha has also performed in numerous festivals such as The World Series of Comedy Las Vegas, She Devil NY, and Laughing Skull Atlanta.

It’s difficult being a human, and Tim Warner wants to talk about it. With his sharp wit, keen observation and a lot of sincerity, Tim dives deep under the surface to point out all of the hilarious truths about what it means to be part of humanity.

Warner is the ultimate antihero, finding strength in showing his vulnerability and sharing his own weaknesses and flaws. Rather than creating a diversion from the things that gnaw at us, he shines an interrogation light on them and makes you laugh about what a messy business life is.

Warner has appeared on K*ll Tony Podcast and his comedic insights were quoted in the book Behind the Laughs: Community and Inequality in Comedy By Michael P. Jeffries In 2019, Warner was a finalist on “Comics Watching Comics” on Amazon Prime and in December he is releasing his debut Comedy specumentary – “A Flawed Pursuit o’ Happiness”

Full Bar, Craft Beer, Dinner Menu. We serve food and drinks before, and during the shows. 18+, Two item min purchase per person (food or drinks - does not have to be alcohol).