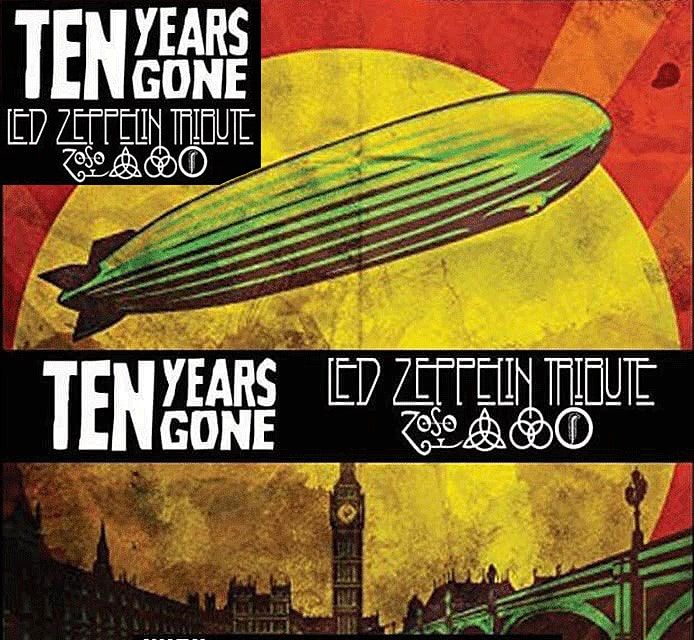 Advertisement
Ten Years Gone - Tribute to Led Zeppelin returns to the Dove!
About this Event

Ten Years Gone – A Led Zeppelin Tribute brings all the sonic mastery and energy to authentically recreate the amazingly memorable Led Zeppelin experience. By combining the best live performance and studio album sound, Ten Years Gone gives music fans the ultimate tribute show to one of the greatest rock bands there ever was. Faithful recreations of equipment, style, and sound brings fans back to when the Hammer of the Gods was held by Led Zeppelin.

Ten Years Gone is led by John McGah and his soaring vocals. He delivers Robert Plant’s iconic style and vintage high notes to a degree not many singers can reach. His high energy front-man prowess brings audiences to their feet at every show. Cody Sickler’s astute knowledge of Zeppelin’s musical catalog and Jimmy Page’s lead-guitar style brings Ten Years Gone to a new height of authenticity. His use of Jimmy Page’s famous Les Paul guitars brings all of the classic tones to the stage. Bret Perrin on electric and acoustic rhythm guitars rounds out the wall of sound that can be heard on Zeppelin’s studio recordings. Bret’s guitar element and backing vocals enriches the sound audience members hear at shows. Rhythmically holding the sound together is J. Simms on bass, who functions as the pulse of Ten Years Gone. J. is dedicated to the pursuit of emulating John Paul Jones’ legendary bass lines and musical sensibilities. Multi-instrumentalist Bill Galey’s orchestral touch on the keyboards and acoustic guitars is paramount in the recreation of Led Zeppelin’s music. He leads the band through epic show stoppers such as “Kashmir” and the beautiful “Rain Song.” On drums, Joe Lederman has mastered John Bonham’s thunderous style. As a lifelong fan of Bonzo’s, Joe has meticulously studied Zeppelin’s bombastic percussive side since he was a young boy; and he takes special pride in performing an authentically-inspired “Moby Dick” drum solo.

The band reproduces all of the hits, deep cuts, and folk and blues inspired songs in a way that captures all of the light and shade aesthetics, which Jimmy Page touts as one of the key aspects in Led Zeppelin’s music. Ten Years Gone’s incredible sonic and visual presence has developed on Colorado’s theater and festival stages.

“Ten Years Gone authentically recreates the experience of Led Zeppelin live, bringing to life all the classic songs fans know and love from this celebrated rock band. Ten Years Gone plays all your Led Zeppelin favorites, including hits like “Stairway to Heaven,” “Whole Lotta Love,” “Ramble On,” and many more.” — Vail Daily