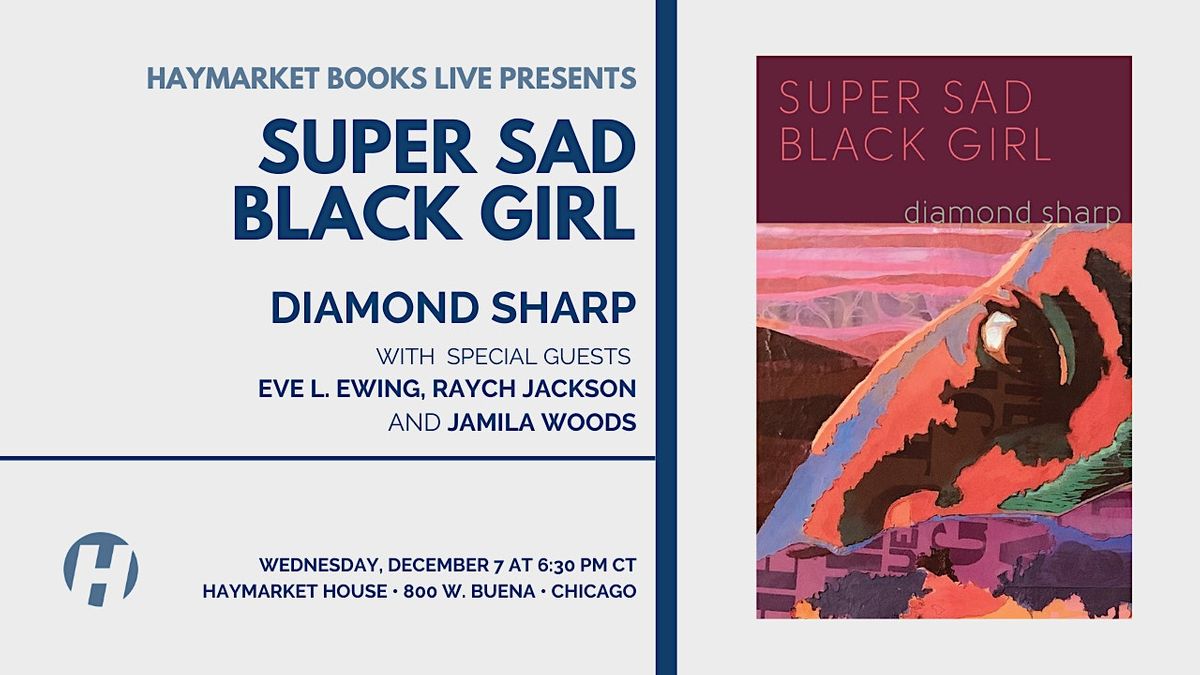 Diamond Sharp’s is a love letter to her hometown of Chicago, where the speaker finds solace and community with her literary idols in hopes of answering the question: What does it look like when Black women are free?

Lorraine Hansberry and Gwendolyn Brooks appear throughout these poems, counseling the speaker as she navigates her own depression and exploratory questions about the “Other Side,” as do Sandra Bland, Rekia Boyd, and other Black women who have been murdered by police.

Sharp’s poetry is self-assured, playful, and imaginative, reminiscent of Langston Hughes with its precision and brevity. The book explores purgatorial, in-between spaces that the speaker occupies as she struggles to find a place and time where she can live safely and freely. With her skillful use of repetition, particularly in her series of concrete poems, lines and voices echo across the book so the reader, too, feels suspended within Sharp’s lyric moments. Super Sad Black Girl is a compassionate and ethereal depiction of mental illness from a promising and powerful poet.

****Masks and proof of vaccination are required for all attendees. Doors will open at 6:00 PM.***

Diamond Sharp is a poet and essayist from Chicago. is her debut collection of poems.

Dr. Eve L. Ewing is a sociologist of education and a writer from Chicago. She is the award-winning author of four books: the poetry collections Electric Arches and 1919, the nonfiction work Ghosts in the Schoolyard: Racism and School Closings on Chicago's South Side, and most recently a novel for young readers, Maya and the Robot. She is the co-author (with Nate Marshall) of the play No Blue Memories: The Life of Gwendolyn Brooks.

Rachel “Raych” Jackson is a writer, educator and performer. Her poems have gained over 2 million views on YouTube. She is the 2017 NUPIC Champion and a 2017 Pink Door fellow. Jackson recently voiced 'DJ Raych' in the Jackbox game, Mad Verse City. She voices Tiffany in Battu, an upcoming animation recently picked up by Cartoon Network. Her latest play, “Emotions & Bots”, premiered at the Woerdz Festival in Lucerne, Switzerland.

Jamila Woods is a Chicago-bred singer/songwriter and award-winning poet whose inspirations include Gwendolyn Brooks and Toni Morrison. Following the 2016 release of her debut album HEAVN, Woods received critical acclaim for her singular sound that is both rooted in soul and wholly modern. Her 2019 sophomore release LEGACY! LEGACY! featured 12 tracks named after writers, thinkers, and visual artists who have influenced her life and work. She is a Pushcart Prize-winning poet and co-editor of BreakBeat Poets: Black Girl Magic (2018).

This event is sponsored by Haymarket Books. While all of our events are freely available, we ask that those who are able make a solidarity donation in support of our important publishing and programming work.