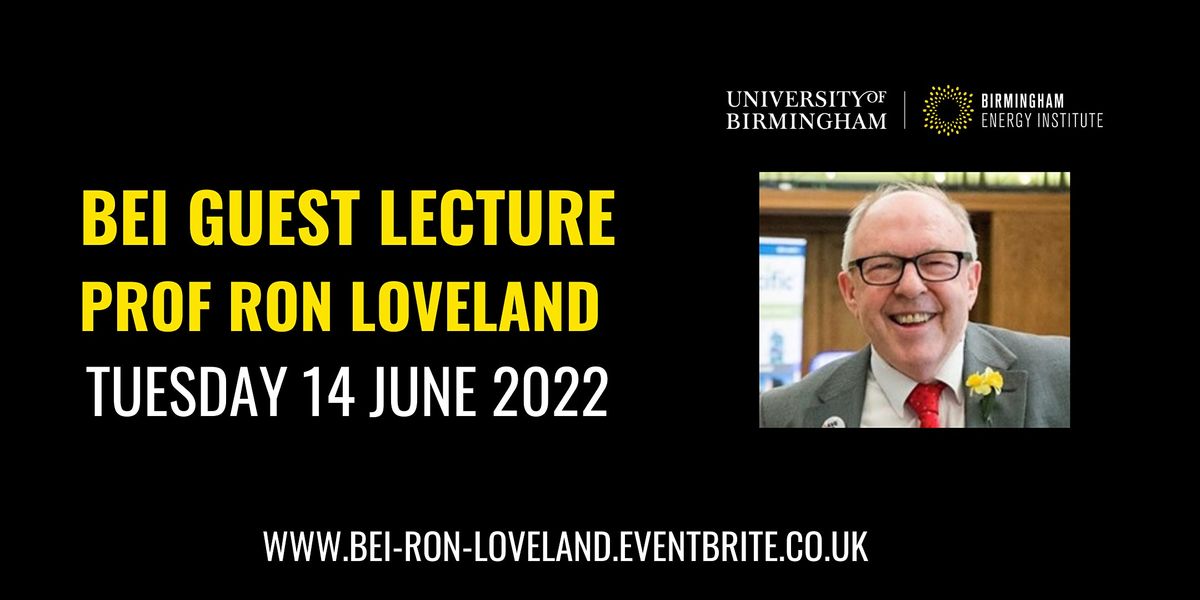 Ron has spent a lifetime on energy matters and now with a very broad overview role he is looking forward to what the next 5/10/15 years might bring as we attempt to transition to net zero.

During the lecturer Ron will briefly reflect on the technology options available to Britain to deliver an affordable and resilient Net Zero energy system and the all-important eco-systems related to government policies.

Ron will consider the necessary components to enable a just and successful transition including:

Ron also hopes time to have a stimulating short-debate with the audience on their views on this crucial topic.

Prof Ron Loveland is a very experienced technologist and member of the senior civil service- having worked extensively at the industry/government interface on technology, innovation, enterprise and energy matters over the last 30 years. Following holding the post of Director: Sustainable Energy and Industry in the previous Welsh Assembly Government, he was appointed over ten years ago as the Energy Advisor to the Welsh Government with a mix of path-finding, advisory and ambassadorial roles (local and international) associated with helping to deliver the ambitious Net Zero objectives for Wales on a joined-up government basis.

Prior to holding these positions, Ron was the Chief Technology Officer responsible for advising the Welsh Assembly Government on energy, steel, telecommunications and more general sustainable business-development policies. Ron came to Wales in 1986 as head of the Wales innovation and technology(WINtech) operation within the then Welsh Development Agency- which followed undertaking a mix of academic and industrial research related roles in Scotland and England including: seminal work on a-Si photoconductivity; health and safety research and regulation and Whitehall-based, micro & opto-electronic industries sponsorship.

Ron is an honorary professor at the College of Engineering, Swansea University. He is a Fellow of the UK’s Institute of Physics and an ex-chartered member of the Institute of Electrical Engineers. He participates in the work of many UK and Wales energy and innovation committees including membership of the UK Government’s Net Zero innovation board ; the UK’s joint Government/Industry chaired energy research partnership(ERP); various smart, flexible whole-energy systems innovation focused advisory committees led by BEIS, the UK electricity network association (ENA) and Ofgem, as well as sitting as an observer on the current Gov/Industry jointly chaired UK CCS and Hydrogen Advisory Councils .

With Wales academia, Ron sits on the advisory board of the major Flexis, Cardiff/South Wales/Swansea Universities decarbonisation-enabling initiative. Ron also chaired the technical review committee for the whole-energy systems National Grid/Arup led Zero2050 South Wales project and was on the board of Swansea University’s world-leading ‘buildings as power stations’ SPECIFIC programme.

Ron is also privileged to have an international dimension to his work, having visiting China, Japan, USA, Australia, Middle-East and Europe (and just before the Covid lockdown) the Netherlands to exchange views on Net Zero policies with the Dutch Government . These international contacts have grown in importance in the light of the vital and increasing relevance of international developments to an achievable Net Zero global energy future, In order to facilitate these contacts, Ron has operated for part of the year from Australia and held a visiting scientist post at the world-class CSIRO solar-energy R&D centre in Newcastle. In the new world of remote working, he currently works closely with the Energy Policy Institute of Australia(EPIA).