An Evening with Joe Calzaghe CBE 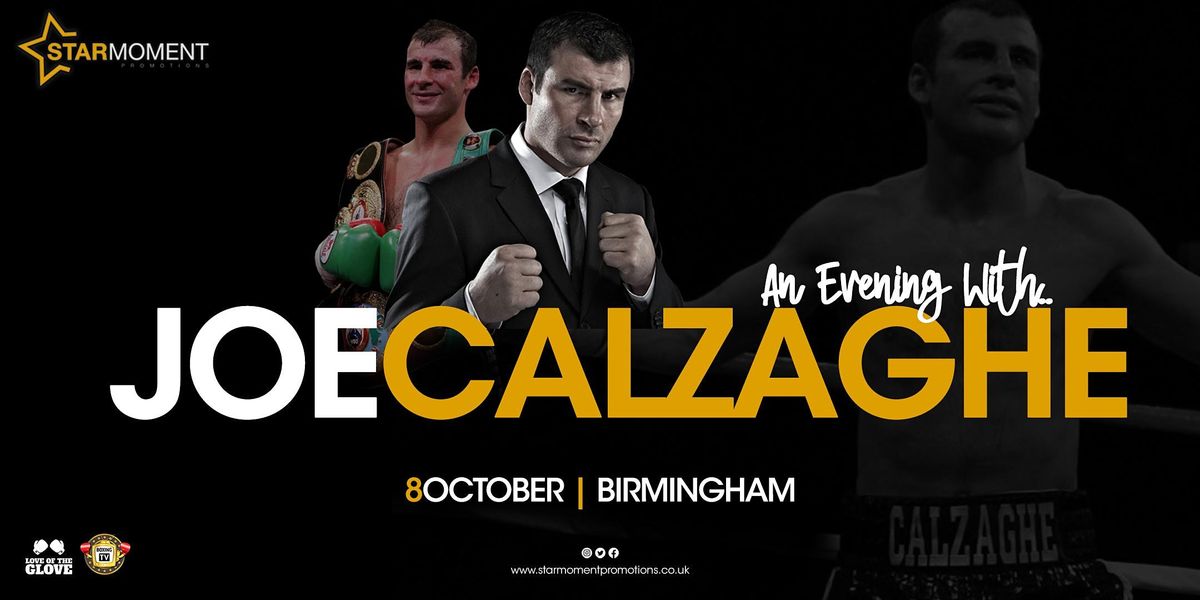 Join us in Birmingham at the Regency Suite on Saturday 8th October 2022 for an evening with the longest-reigning super-middleweight world champion in boxing history Mr Joe Calzaghe. Listen to Calzaghes stories of his amazing boxing career as both super-middleweight and light-heavyweight champion, tales behind the scenes and many laughs along the way. This is a fantastic opportunity for British boxing fans to enjoy an evening in the company of Joe a true undefeated king of the sport hosted by world famous compere Jed Stone. The evening will consist of a sit down audience with Joe Calzaghe, your chance to ask questions, games to win some sporting memorabilia and an interval raffle and auction.

We have 3 fantastic ticket packages to offer; the first being platinum which is limited to just 30 tickets that includes early entry for a meet and greet with Calzaghe himself, a signed and framed photo, photo with you and Joe on the night printed & framed and front row table seating. Gold tier tickets include entry and a photo of you and Joe printed on the night. Silver tickets will gain entry to the event to enjoy the show.

Nicknamed the "Pride of Wales" and the "Italian Dragon" Calzaghe is the longest-reigning super-middleweight world champion in boxing history, having held the WBO title for over 10 years and defending the title against 20 opponents (a record in the division, shared with Sven Ottke) before moving up to light-heavyweight. As his super-middleweight and light-heavyweight reigns overlapped, he retired with the longest continual time as world champion of any active boxer at the time. Calzaghe was also the first boxer to unify three of the four major world titles (WBA, WBC, and WBO) at super-middleweight, and was the first Ring champion in that weight class.

Between 2006 and 2008, Calzaghe was ranked by The Ring as one of the world's top ten active boxers, pound for pound, reaching a peak ranking of third in January 2009. He retired in February 2009 with an undefeated record, and as a reigning world champion. As of 2022, BoxRec ranks Calzaghe as the twenty-fourth greatest fighter of all time, pound for pound, as well as the second-greatest European boxer of all time.

In 2007, Calzaghe won the BBC Sports Personality of the Year Award, making him the first Welsh winner of this award since David Broome in 1960. Already an MBE, he was elevated to CBE in the 2008 Queen's Birthday Honours. Calzaghe was inducted into the International Boxing Hall of Fame in 2014.