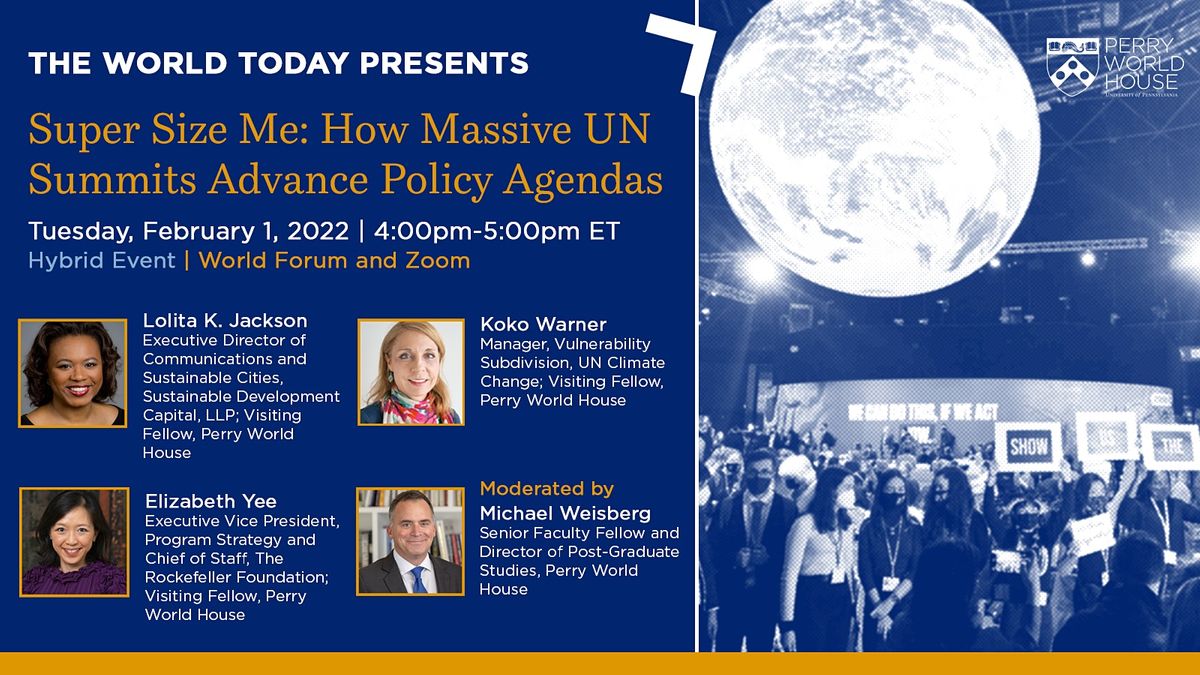 Advertisement
In November 2021, almost 40,000 delegates descended on Glasgow, Scotland, for the UN Climate Change Conference (COP26).
About this Event

It was the largest climate meeting in history. Thousands of people were at the negotiating table and thousands more attended the COP’s hundreds of side events. How is progress forged at meetings of this scale? Where does the real work take place? And what comes next?

In this edition of The World Today, our panel of experts, including two Penn alumnae, will share their experiences advancing the climate policy agenda through philanthropic, corporate, and UN engagement. They will explore what can be achieved at these summits, both behind closed doors in the "blue zone" where negotiations take place, and the public "green zone," where side events – and a diversity of interests – abound.

Lolita Jackson is the Executive Director of Communications & Sustainable Cities for Sustainable Development Capital, LLP, a billion-dollar London-based climate finance and investment firm. She previously worked for the NYC Mayor’s Office for 15 years in a variety of roles, and until March 2021 she served as the Special Advisor for Climate Policy & Programs, where she was the climate diplomat and lead for the administration regarding global work on divestment and climate finance. Prior to her tenure in the NYC Mayor’s Office, Jackson worked for Morgan Stanley Investment Management for 12 years. Jackson is a 2007 winner of the Penn Alumni Award of Merit and in May 2021 was named a Member of the Most Excellent Order of the British Empire. She is a 1989 alumna of the Penn School of Engineering.

Koko Warner is an expert on climate change risks, impacts, and resilience at the UN Framework Convention on Climate Change (UNFCCC) secretariat. She manages the Vulnerability subdivision, where she guides the global adaptation knowledge-to-action hub and the Local Communities and Indigenous Peoples Platform. Warner is a lead author for the IPCC 5th and 6th assessment reports, including the Special Report on Climate Change and Land. Previously at UNFCCC, she supervised the loss and damage policy area. Before joining UNFCCC, Warner was founder and Executive Director of the Munich Climate Insurance Initiative, and scientific director of environmental migration and social resilience at UN University in Bonn. The International Council of Science named Warner among the top 20 women in the climate change debate. She holds a Ph.D. in Economics.

Elizabeth Yee is the Executive Vice President, Program Strategy and Chief of Staff at The Rockefeller Foundation. She oversees The Foundation’s portfolio of global programs, leading the advancement of The Foundation’s strategic priorities. She joined The Rockefeller Foundation in 2019 as Managing Director, Climate and Resilience. In 2015, Yee joined 100 Resilient Cities, where she held various leadership roles, including Vice President, Strategic Partnerships, Vice President, City Solutions, and Vice President, Resilience Finance. Prior to her leadership roles at 100 Resilient Cities, Yee co-led the Public Power and Utilities practice at Barclays Capital. During her seventeen years working in the capital markets at Morgan Stanley, Lehman Brothers, and Barclays, she and her team developed, structured, and executed over $30 billion of infrastructure transactions. Yee is a two-time “Bond Buyer Deal of the Year” awardee for her team’s innovative approaches in structured finance. She is a graduate of the University of Pennsylvania.

Michael Weisberg is Senior Faculty Fellow and Director of Post-Graduate Programs at Perry World House, as well as Bess W. Heyman President's Professor and Chair of Philosophy at the University of Pennsylvania. An expert in philosophy of science, climate policy, and social ecology, he serves as Editor-in-Chief of Biology and Philosophy, advisor to the United Nations Framework Convention on Climate Change’s Nairobi Work Programme and the Republic of Maldives, and directs Penn’s campus-wide research in Galápagos. He is the author of Simulation and Similarity: Using Models to Understand the World and Galápagos: Life in Motion, as well as a contributing author to the Intergovernmental Panel on Climate Change's 6th Assessment Report. Professor Weisberg received a B.S. in Chemistry and a B.A. in Philosophy from the University of California, San Diego, and continued graduate study in Philosophy and Evolutionary Biology at Stanford University, earning a 2003 Ph.D. in Philosophy.

Perry World House is following the University of Pennsylvania’s COVID-19 guidelines. In-person access to our hybrid events is now open to the public as well as the Penn community.

All in-person attendees will be REQUIRED to wear a mask and MUST either show their Green PennOpen Pass (University of Pennsylvania faculty, students, postdocs, and staff or badged contractors) OR Green PennOpen Campus (all other visitors including event attendees) in order to take part in-person.

You must complete your PennOpen Campus screening on your cell phone or computer BEFORE arriving at Perry World House. Click here for more information about PennOpen Campus and how it works.

We will continue to provide virtual access to all of our hybrid programming. Zoom details will be found in your order confirmation email.