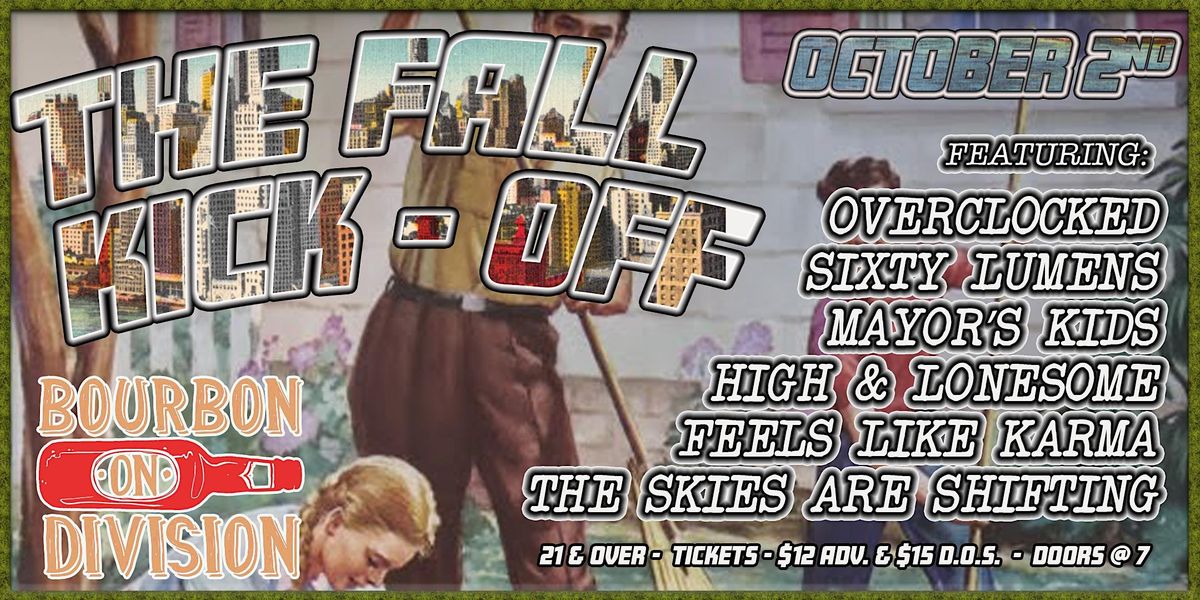 Advertisement
Join us for The Fall Kick-Off on October 2nd with Overclcked, Mayor's Kids & more at Bourbon on Division!
About this Event

: Formed in 2020, Sixty Lumens is an up-and-coming electronic alt-rock band from Chicago, IL. Combining catchy anthemic rock choruses with refreshing modern synth and beat production, the band showed off their musical prowess with their first single "It Is Where You Are". Singing about the dread of having an invisible horror-film monster follow you mixed with upbeat and energetic pop-punk songwriting proved to be an effective combination. Their follow-up single “INSIDE” shows off a completely different side of the band, utilizing a darker, moodier, and more dynamic sound. Bringing into play a splash of heavy breakdowns, a tear-jerking piano interlude, and a final soaring chorus makes for a listening experience that feels totally unique.

: Rock 'n Soul band based out of Chicago

: The Skies Are Shifting is a blend of multiple genres, with their roots being in post-hardcore.

: Formed in 2020 just outside of Joliet, Illinois by two hard-working and creatively determined musicians, they decided to begin writing music, soon connecting with two other musicians from Chicago. Committed and motivated despite the hardships of the global pandemic, the group continued meeting regularly to write and record, eventually releasing their first single in Fall of 2021.

But who is Feels Like Karma? Are they just another group of emo influenced (and one hippie) rapscallions? They’re that and much more with Jessica Labriola on bass, Guillermo Martinez on lead guitar, Brendan Richko on rhythm guitar, and Michael Thompson on drums. They are determined to combine their varied music influences, backgrounds, and talents to create a sound that invokes relatable and meaningful lyrics backed by powerful, yet intricate instrumentals.