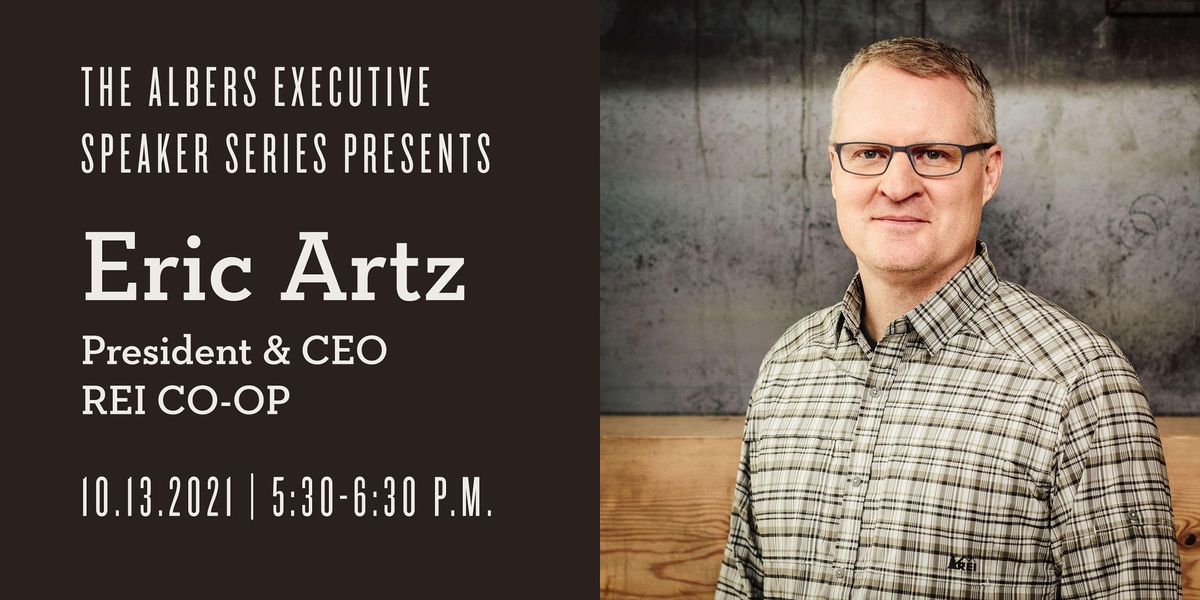 Advertisement
Learn more about leadership with Eric Artz, President & CEO of REI Co-op, in his talk at the Albers Executive Speaker Series.
About this Event

Since 2002, the Albers School of Business and Economics has organized the Speaker Series, live panels featuring top business leaders from the Puget Sound Area.

Guests talk about a topic of their choice and respond to questions from a panel and the audience. The Speaker Series is yet another way Albers is committed to build student connections with the Seattle business community.

Eric Artz, President & CEO of REI Co-op, will be kicking off our Fall 2021 season. Already the country’s largest consumer co-op, REI is making big plans to grow its membership from 20 million to 50 million people by 2030. To put the enormity of this goal into context, if successful, 15% of the U.S population will be a member of REI. As the national outdoor retailer fosters an engaged active community, it’s also reshaping itself into a cultural and political force.

For Artz, this growth presents an opportunity to transform not just the co-op, but the entire outdoor industry. Over the next decade, REI will fundamentally change its relationship with carbon, lower the barrier to entry in outdoor recreation, fight for increased equity, representation, and inclusion.

Artz joined REI in March 2012 as chief financial officer and became chief operating officer and executive vice president in August 2014. He was named the co-op’s chief executive in May of 2019.Artz has led teams in retail, digital, strategy, supply-chain and IT, and helped the business rise to $2.75 billion in sales for 2020 and a growing community of more than 20 million lifetime members.

Artz holds a Bachelor of Science degree from Albright College. Artz is an officer of the board for the Mountains to Sound Greenway Trust and serves as a director of United Natural Foods, Inc.

Artz is an avid cyclist who also enjoys fishing, skiing and hiking with his family.

The Albers Executive Speaker Series is free and open to the public. This event is being planned as a live talk with the option to pivot to virtual in compliance with state and local health authorities' directives.

Sign up to be advised closer to the date whether the event will be live or conducted via Zoom. You may also ask questions via the registration form.