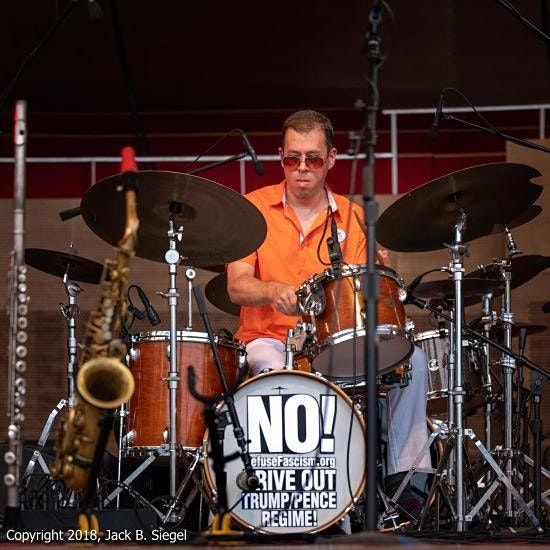 8:30pm / in person and livestream
About this Event

This concert will be livestreamed. You can watch the stream here:

Please support the artists by purchasing a donation-based stream ticket.

Join us as we celebrate 25 years of music from Ted Sirota’s Rebel Souls. The group, originally a quartet, formed and released their debut recording, “Rebel Roots” on the Naim label in 1996. Guitarist Jeff Parker, a bandmate of Sirota’s in the Last Kwartet, joined the original lineup, along with Kevin Kizer on tenor sax, and Jeff Hill on bass. The band’s lineup changed and expanded with each of the following three releases on Naim, as well as “Breeding Resistance” in 2004 on Chicago’s Delmark label. Some of Chicago’s finest improvisers have been members, or recorded, gigged, and toured with Rebel Souls, including Rob Mazurek, Josh Abrams, Noel Kupersmith, Geof Bradfield, Jeb Bishop, Dave Miller, Clark Sommers, Greg Ward, Marquis Hill and many others.

Sirota, a Chicago native, created Rebel Souls as a vehicle to advance what he has referred to as “Anti-Imperialist Music”. Original compositions have been recorded in dedication to Black Panthers like Fred Hampton, Mumia Abu-Jamal, and Geronimo Pratt, and other freedom fighters like the Nigerian poet Ken Saro-Wiwa. The band has covered and arranged music from other musicians who have refused to accept the status quo, including The Clash, Miriam Makeba, Charles Mingus, Charlie Haden, and Caetano Veloso.

A graduate of Berklee College of Music in Boston in 1991, Sirota re-located back to his native Chicago in 1992 and has been a mainstay in Chicago’s music since ever since. Along with Rebel Souls, Sirota has lead “Ted Sirota’s Heavyweight Dub” since 2013, when the band recorded and performed with the legendary Jamaican Dub engineer “The Scientist”. Sirota has performed with many stellar musicians in his career, including Lalah Hathaway, Roy Hargrove, Von Freeman, Lin Halliday, Joshua Redman, Mark Turner, and Greg Osby to name a few.