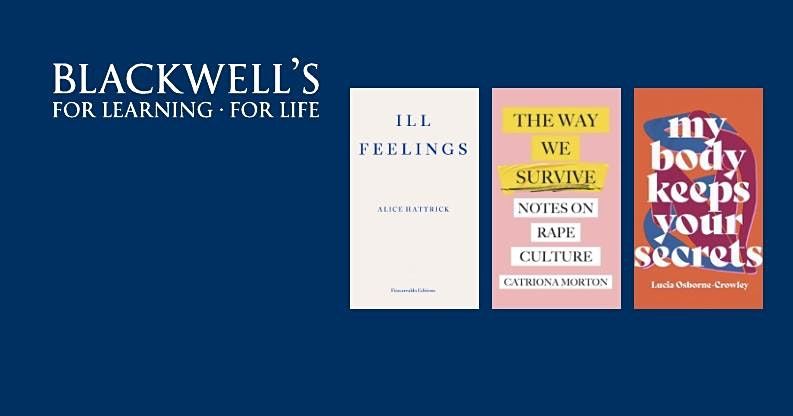 Alice Hattrick, Catriona Morton and Lucia Osborne-Crowley will be talking about their latest books with host Sam Mills.
About this Event

Alice Hattrick, Catriona Morton and Lucia Osborne-Crowley will be discussing their latest non-fiction books ILL FEELINGS, THE WAY WE SURVIVE: NOTES ON RAPE CULTURE and MY BODY KEEPS YOUR SECRETS which explore chronic pain and surviving trauma. They will be chatting to host Sam Mills (Fragments of My Father, Chauvo-Feminism).

In 1995 Alice's mother collapsed with pneumonia. She never fully recovered and was eventually diagnosed with ME, or Chronic Fatigue Syndrome. Then Alice got ill. Their symptoms mirrored their mother's and appeared to have no physical cause; they received the same diagnosis a few years later. Ill Feelings blends memoir, medical history, biography and literary non-fiction to uncover both of their case histories, and branches out into the records of ill health that women have written about in diaries and letters. Their cast of characters includes Virginia Woolf and Alice James, the poets Elizabeth Barrett Browning and Emily Dickinson, John Ruskin's lost love Rose la Touche, the artist Louise Bourgeois and the nurse Florence Nightingale. Suffused with a generative, transcendent rage, Alice Hattrick's genre-bending debut is a moving and defiant exploration of life with a medically unexplained illness.

Alice Hattrick is a writer based in London. Their criticism and interviews have appeared in publications such as Frieze, Artreview and The White Riview. They were shortlisted for the Fitzcarraldo Essay Prize in 2016. Ill Feelings is their first book.

THE WAY WE SURVIVE : NOTES ON RAPE CULTURE - Catriona Morton

Sexual violence is an epidemic happening across all intersections of society, impacting every one of us. In the aftermath of the #MeToo and Time's Up movements, a cultural conversation has been ignited about the prevalence, immediate impact and long-term effects that sexual violence has on people. It has begun conversations on sexism, misogyny, consent and trauma. From the entertainment industry to governments; from India to the USA, people are beginning to listen to the pain survivors have been living with forever.

Bringing her voice to the fore, in The Way We Survive, Catriona Morton offers up a cultural critique of rape culture in the UK, along with personal, intimate insights into how survivors live with and cope in the aftermath of such a violation.

Writing from her own experiences and those she has met through her podcast and her work as an activist, Catriona will approach topics of consent and education, the mental and physical health of survivors, the cultural shift concerning attitudes surrounding sexual violence, the impact of politics and governmental cuts to survivors in the UK as well as the realities of subjects such as dating and reclaiming sexuality in the aftermath of sexual violence.

With unflinching honesty and surprising moments of humour, Catriona wants to change the narrative around survivors, and to force us to reconsider the ways in which we talk about surviving sexual violence.

Catriona Morton is a British-Irish writer and creative. She has degrees in Philosophy and Sociology and has written for multiple publications about disability and survival. She is the host of the BBC Sounds podcast After: Surviving Sexual Assault and the founder of the survivor-centred blog/resource sharing website, Life Continues After (www.lifecontinuesafter.com). She is also a trained facilitator, previously working at Goldsmiths University, and has received complete training from Rape Crisis.

Lucia Osborne-Crowley, author of I Choose Elena, writes about the secrets a body keeps, from gender identity, puberty, and menstruation to sexual pleasure; to pregnancy or its absence; and to darker secrets of abuse, invasion, or violation. The voices of women, trans and non-binary people around the world, and the author's own deeply moving testimony, cohere into an immersive polyphonic memoir that tells the story of the young person's body in 2021. In this boldly argued and widely researched work about reclaiming our bodies from shame, Osborne-Crowley establishes her credentials as a key intersectional feminist thinker of her generation.

Lucia Osborne-Crowley is a journalist, essayist, writer and legal academic. She works as a reporter for the Wall Street Journal and is a regular columnist for the Huffington Post. She also writes for ABC News, Meanjin Quarterly, Women's Agenda and various other news organisations. I Choose Elena, based on her celebrated essay in Meanjin Quarterly, is her first book. She lives in London.

Sam Mills studied English Language and Literature at Oxford University and worked as a journalist and publicist before becoming a full-time writer. Her debut novel for adults, The Quiddity of Will Self, was described by The Sunday Times as 'an ingenious, energetic read' and by the Guardian as 'extraordinary'. Her literary memoir of caring for her father, Fragments of My Father, was published by Fourth Estate in May 2020 and her essay Chauvo-Feminism: On Sex, Power and #MeToo was released by The Indigo Press earlier this year. She is the co-editor of TRAUMA - a collection of essays on Art and Mental Health.

Books by all three authors will be available to purchase on the night and Alice, Catriona, Lucia and Sam will be happy to sign copies after the event. If you would like a signed copy of any of the books but cannot make the event, please contact us on 0161 274 3331 or [email protected] and we can arrange this for you. Covid-19 precautions will be adhered to in order to ensure the safety of our attendees, authors and booksellers.