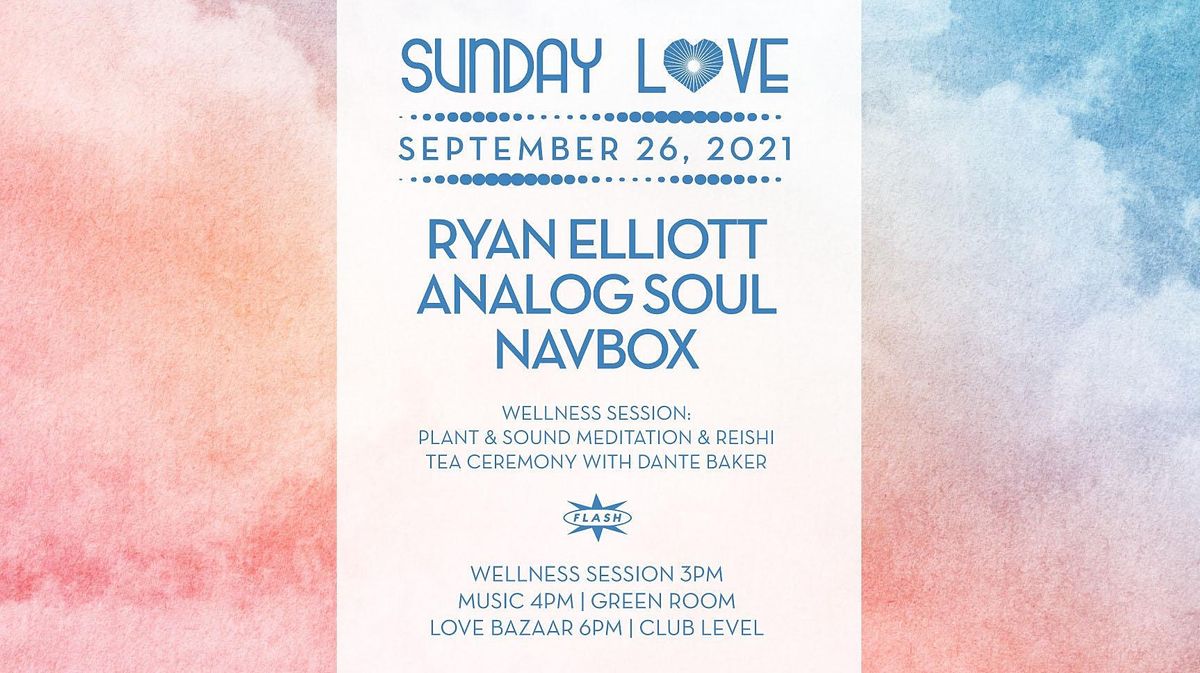 After a sold out event at Flash in July, Ryan Elliott returns for another edition of Sunday Love.
About this Event

After a sold out event at Flash in July, Ryan Elliott returns for another edition of Sunday Love. Once the Detroit native took his sound to Berlin and became a part of Ostgut Ton’s agency and then began releasing on its label. Given Ostgut Ton’s connection to both Panorama Bar and Berghain, this gave Ryan the comfort to experiment and blur the lines between house and techno. Given this unique musical heritage and process, Ryan Elliott embodies a dichotomy of both Detroit and Berlin, and is ready to deliver another smashing set in the District. Ryan will be joined by twin sister collective, Analog Soul. The New York based duo has taken the city by storm through their gigs and residencies at Bossa Nova Civic Club and Nowadays. Coming off headlining the Boiler Room Festival in NYC earlier this month, they’re ready to make their return to Flash along with Ryan Elliott for a can’t miss edition of Sunday Love.

Experience the powerful benefits of Reishi Mushroom and go on a Sound Healing journey with Dante Baker. Known as the Queen of Mushrooms, Mushroom of Immortality, Lingzhi mushroom, Ganoderma Lucidum, or Reishi, this mushroom supports optimal health for over 2,000 years in China and Japan. Reishi mushroom is an adaptogen meaning it will help you adapt to stress. Once we drink the Reishi mushroom tea, we will immediately feel grounded to receive sound vibrations from Dante’s Crystal Bowls and wooden flutes. These sacred instruments will create specific sounds to help relax the body, calm the nervous system, and access deeper states of consciousness.

Ryan Elliott has spent the past two decades of his esteemed career effortlessly bridging the gap between different artistic expectations. Growing up as a DJ in Detroit, but coming into his own in Berlin, his sets expand on each city’s styles. A resident at Berghain and Panorama Bar, he refuses to be aligned with just techno or house, instead highlighting their optimal overlaps. And as a producer, remixer, and founder of his own label, Faith Beat, Elliott releases music that is playable but unpredictable, perfectly calibrated for dancefloor impact and enduring enjoyment. No matter what form his musical expression takes, with Elliott listeners always seem to get the best of both worlds.

As a DJ, Elliott delivers sets that slice energetically across the house and techno divide, a revelatory approach that's infused with a deep respect for his selections. This ethos also manifests in the monthly charts Elliott has published since 2003, insisting on giving a proper platform to whatever he plays. As with all of his efforts, Elliott doesn’t pit one place or style against each other, continuing to pursue a sleek and transportive fusion.