SOAA Donovan Discussions - Policy, Our Afghan SOF Partners, 2023 and Beyond

The Army And Navy Club | Washington 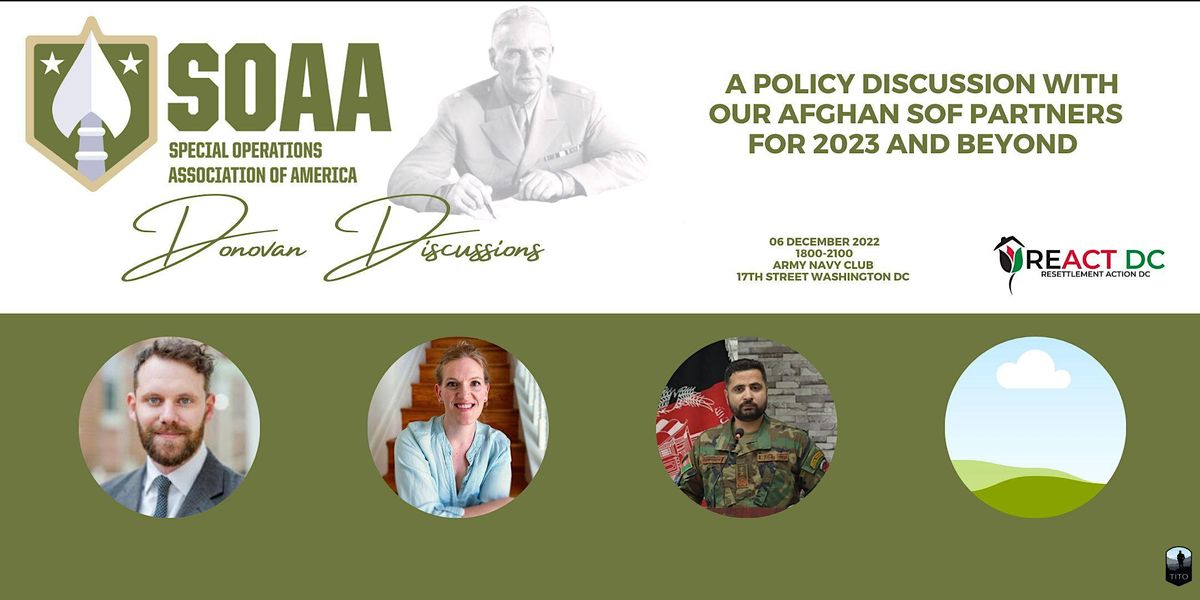 Advertisement
SOAA is proud to host a discussion surrounding policy involving Afghan SOF Veterans as we look back on 2022 and forward to 2023 and beyond.
About this Event

Issue: Members of the Afghan Special Operation Forces, including those who served in the Afghanistan National Army Special Operations Command (ANASOC), Afghan Air Force (AAF), and Special Mission Wing (SMW), are ineligible for the Special Immigration Visa (SIV) program. These men and women, who trained at U.S. military schools and stood beside U.S. Special Operations in Afghanistan over the past 20 years, arrived in the United States via Humanitarian Parole (HP). Due to their immigration status, they have no pathway for continued military service in the United States and struggle to find meaningful employment.

Background: It is estimated that 2,000 members of the Afghan special operations community were evacuated during the fall of Kabul. These men and women were trained by U.S. Special Operations forces, have intimate knowledge of U.S. operations, and partnered with the intelligence community (IC). They bring a unique and in-demand set of skills from which the U.S. military and U.S. employers could benefit.

William Joseph "Wild Bill" Donovan was an American soldier, Lawyer, intelligence officer, and diplomat most famous for his role in leading the Office of Strategic Services. (OSS) A lesser-known narrative about Wild Bill Donovan was his work outside intelligence that shaped the United States and the world's approach to the toughest problems. Experience gained from combat in World War 1 and his experience from the OSS was the base for leadership in various roles as a businessman, Lawyer, and Diplomat. In a few examples of a true Ph.D. who could win in a bar fight, Wild Bill took this experience and founded the American Committee on United Europe, led the People to People foundation, worked with the International Rescue Committee, and co-founded the American Friends of Vietnam. This example of someone who possessed the soul of a Special Operator to effect change in every arena is why we have created the Donovan Discussions.

SOAA represents over 40,000 SOF individuals and a much larger community of SOF personnel. SOAA has gained a large influence with key policy stakeholders. SOAA aims to provide engagement opportunities through the Donovan Discussions to inspire increased understanding of SOAA's efforts and mission. Additionally, through the Donovan Discussions, SOAA can showcase the type of person who pursues the lifestyle of a Special Operations individual. The Donovan Discussions provide a unique opportunity to showcase this talent and ensure the "ground truth" is heard while engaging with policy makers, stakeholders, and friends of the SOF and IC community.

(Early 2023) Systemic Neglect of Female SOF Veterans in the VA

(Early 2023) One Year Later: A Discussion on the Current State of The Ukraine War.

(Spring 2023) AI and the Future of SOF (JSOU Research Topic)