Otter on the Rocks | Seattle 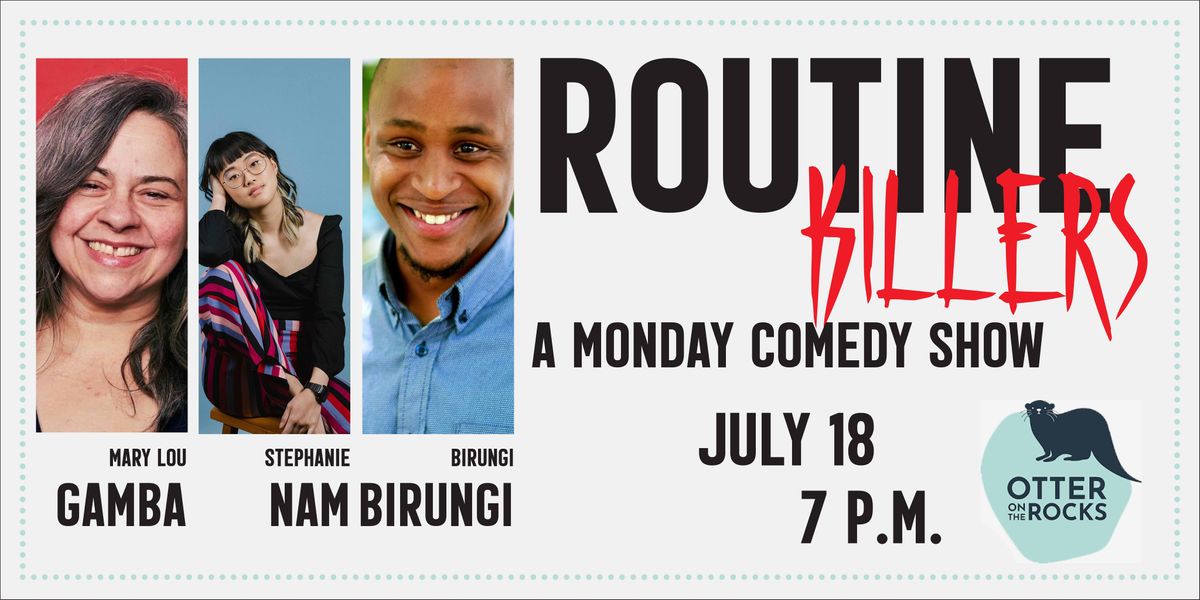 Mary Lou Gamba, Stephanie Nam and Birungi navigate their way to West Seattle for a show filled with local talent!
About this Event

The bridge ain't fixed yet, but it don't matter because we have 3 of Seattle's best comics in West Seattle on July 18 at Otter on the Rocks:

Mary Lou Gamba is an East Coast transplant happily nestled in the Pacific Northwest. A middle aged teenager and delightfully dirty bird, Mary Lou will get you laughing til you snort with her charming and silly exaggerations of her goofy life.

As a regular opener for national headliners, this pint-sized dynamite burns down comedy clubs, bars, and locker rooms all over the country. Mary Lou has been featured at HBO’s Women in Comedy Festival, The Bumbershoot Music and Arts Festival and competed in the 2017 Seattle International Comedy Competition. Watch out, she’ll steal your chicken.

Stephanie is known for her dry humor and wet pussy. She is a capricorn sun, scorpio moon, and lesbian stereotype rising.

Stephanie’s standup has been described “unexpectedly funny” and “awkwardly charming” and “something I’ll remember for the rest of my life” and “the funniest thing I’ve ever seen.”

She produces live shows under NAM NAM PRODUCTIONS which aims to highlight underrepresented identities in comedy and creates safer spaces and communities. Her shows include Men Aren’t Funny, Just a Phase, Model Minority, and Written in the Stars which are regularly sold-out and seen as “some of the best comedy shows around.”

Birungi is a Ugandan comedian based out of Seattle, Washington. Although he initially moved to America for college, he quickly found a different way to fall into debt – stand up comedy! Within 5 years of performing, he has hit stages in multiple cities including Olympia, Bellingham, Portland, Denver, Boston, Phoenix, San Diego and Los Angeles. He has been featured on the “Best of the Fest” list at the Burbank Comedy Festival. Birungi also had the privilege of opening for DL Hughley (Original Kings of Comedy) at the Parlor Comedy club in Bellevue, an experience he describes the highlight of his comedy career.

Since then, he has performed for hundreds of people across America. Most recently, he was a contestant in the Seattle International Comedy Competition which showcases comedians from all over US, Canada and the rest of the world. You can find him performing in and outside major cities throughout the year. He has traveled and opened or featured for seasoned headliners like: Mateen Stewart, Ken Hamlet, Monica Nevi, Susan Jones, Ivan Decker, Bo Johnshon, Luke Severeid, Anish Shah and more. He is aware that you have never heard of these people but hopes you get the idea.

If you are still reading this bio, congratulations because it is almost over. Before you go, Birungi wants you to join him on his comedy journey. Follow him on social media (@birungicomedy on facebook, instagram, twitter).