PRIVATE SCREENING- Gradually, Then Suddenly: The Bankruptcy of Detroit 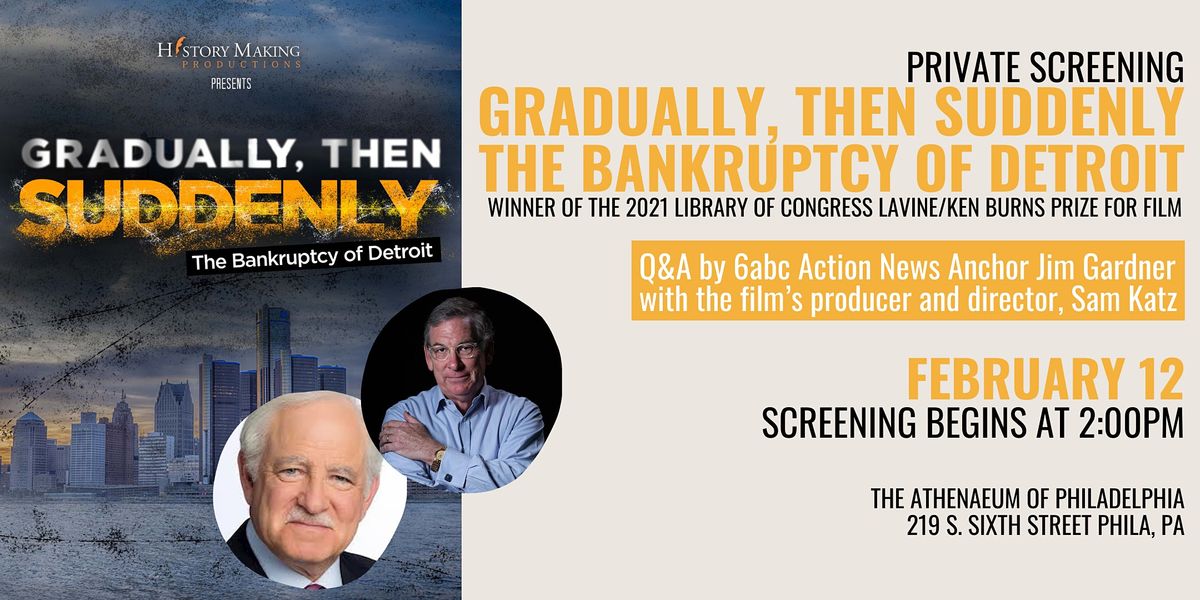 Private Screening of Gradually, Then Suddenly: The Bankruptcy of Detroit followed by a live Q & A by 6abc Action News Anchor Jim Gardner with the film’s producer and director, Sam Katz

Once heralded as the spirit of American manufacturing, music and democracy, Detroit kicked its fiscal can down the road for decades plummeting into insolvency, culminating in the largest municipal bankruptcy in U.S. history. Gradually, Then Suddenly: The Bankruptcy of Detroit is the inside story of how a state-appointed Emergency Manager and the people of this iconic American city-- confronting financial ruin--followed a treacherous path towards a new beginning.

The film was selected as the Winner of the 2021 Library of Congress Lavine/Ken Burns Prize for Film.

Sam Katz is a lifelong Philadelphian who has experienced a diverse and unique career in public and project finance, venture capital, civic activism, development, politics and documentary filmmaking. Sam is best known for his candidacies for Mayor of Philadelphia and for Governor of Pennsylvania. He spent 25 years in municipal finance and chaired the state’s fiscal oversight agency for Philadelphia’s finances.

Since co-founding History Making Productions in 2008, Sam produced documentary films on the history of Philadelphia including the 14-part Emmy award winning series, Philadelphia: The Great Experiment; Urban Trinity: The Story of Catholic Philadelphia; Before Hollywood: Philadelphia and the Birth of the Movies; and Sisters in Freedom, among several others. Sam also produced Beethoven in Beijing, about the rise in popularity of western classical music in China and the cultural bridges built there by the Philadelphia Orchestra. The film was a finalist for the 2020 Library of Congress Lavine/Ken Burns Prize for Film. His latest documentary, Gradually, Then Suddenly: The Bankruptcy of Detroit, was the Winner of 2021 Library of Congress Lavine/Ken Burns Prize for Film.

It would be impractical to list all the major local, national and international stories Jim has covered from the anchor desk, and in the field. While many of those stories do stand out, Jim is most proud of his longevity and consistency, being there at 6 and 11 day in and day out for four decades.

Jim values his involvement in the community and his opportunities to give back to a variety of organizations. Since 1987, the Jim Gardner Scholarship has been awarded annually to a Temple University journalism student.

Proof of vaccination is required to attend.