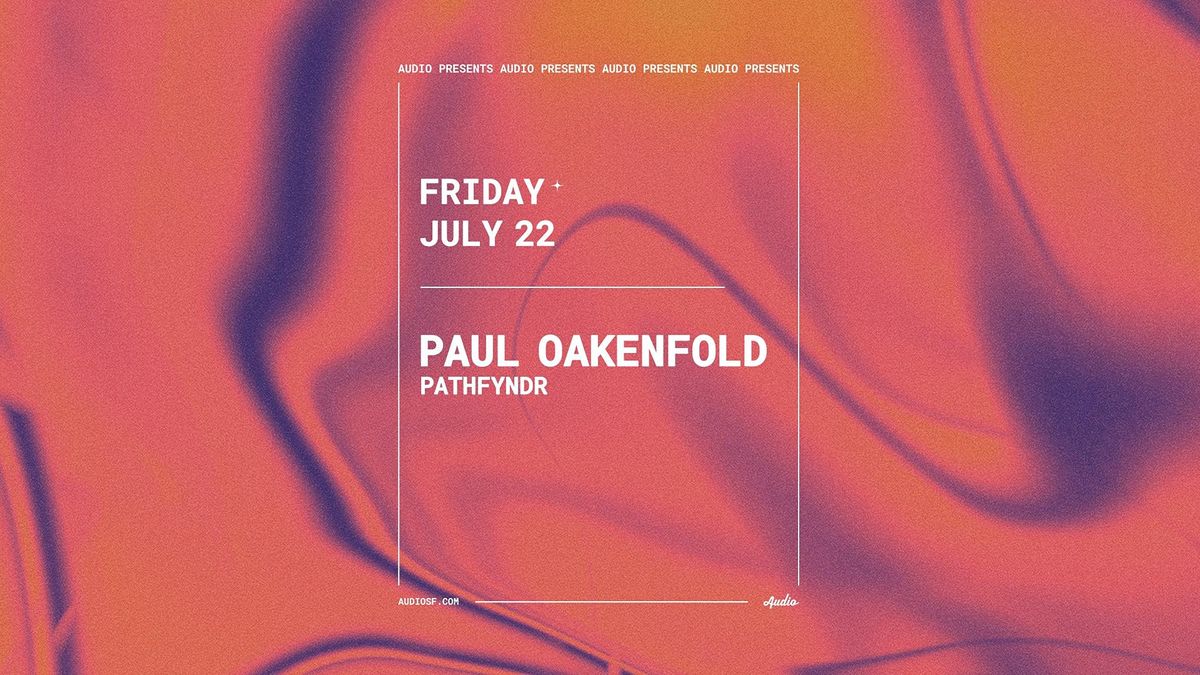 Advertisement
Paul Oakenfold
About this Event

Audio welcomes back living legend, Paul Oakenfold to the club on July 22nd.

Paul Oakenfold is the UK’s number one DJ. This simple statement, however, doesn’t even begin to properly acknowledge Oakenfold’s stellar contribution to our musical landscape. His signature can be seen in everything from the early rise of hip-hop and the re-invention of British dance culture to the Balearic explosion and the birth of ‘Madchester’.

Indeed, it’s a testament to Oakenfold’s restless curiosity and imagination that his career shows no signs of diminution, even after two decades. A snapshot of his activities through the summer of 2001, for instance, finds Oakenfold hosting Perfecto nights in Ibiza before travelling to America where he’s the headline DJ on Moby’s ambitious Area:One festival tour. After that, there are DJ dates everywhere from Buenos Aires and Mexico City to Clapham Common.

Oakenfold has also contributed the soundtrack to America’s number one box-office movie, Swordfish, the release of which is closely followed by the Perfecto Presents Paul Oakenfold in Ibiza DJ mix album this summer. A relentless schedule that emphasises Oakenfold’s growing global status.

All this began in the late-Seventies when a very young Paul Oakenfold, together with his friend Trevor Fung, cut their musical teeth by mixing soul and rare-groove at a basement bar in London’s Covent Garden. His imagination stirred, Oakenfold decided to find the roots of his new-found obsession by moving to West Harlem in New York.

Oakenfold worked as a courier for local dance radio stations in the Big Apple. By night he checked out the city’s burgeoning new club environment, witnessing the extraordinary birth of hip-hop. Fired up, Oakenfold was determined to break into the music industry.

Returning to London, Paul landed a job as an A&R man at Champion Records. He had a keen ear and quickly signed Jazzy Jeff & the Fresh Prince - the latter, of course, to be subsequently revealed as Will Smith - and Salt n’ Pepa.

From Champion, Oakenfold moved to the London offices of Profile and Def Jam. By this time, however, he was increasingly interested in DJ’ing and producing, twin ambitions that were soon to be amply fulfilled.

In 1987 Paul, together with fellow-DJs Danny Rampling, Nicky Holloway and Ian St Paul, travelled to the Balearic island of Ibiza for a summer holiday. At that time the island was a hippie-inspired community with an over-indulgent club scene. The sunshine was great, however, and the bars plentiful. There was potential for a vivid new underground scene, although no one realised at the time just how Ibiza would come to dominate club culture in years to come.

Paul returned to England with a new Balearic house sound. He began running regular club nights in London, most particularly Spectrum of the Future at Heaven. The club became the fulcrum of a new dance attitude, attracting not only the regular London crews but also out of town rock musicians, including the Manchester bands, The Stone Roses and Happy Mondays.

Despite his dance music reputation, Oakenfold had always been an eclecticist at heart, growing up with an equal affection for rock and pop music. Through the latter part of the Eighties, however, rock had become increasingly irrelevant to a new generation fuelled on the underground explosion of club culture. Its presence permeated everything, from illicit activities through to language and fashion, thus it was inevitable that dance music itself would exert a revitalising influence on rock.