Publisher/HostIE School of Architecture and Design 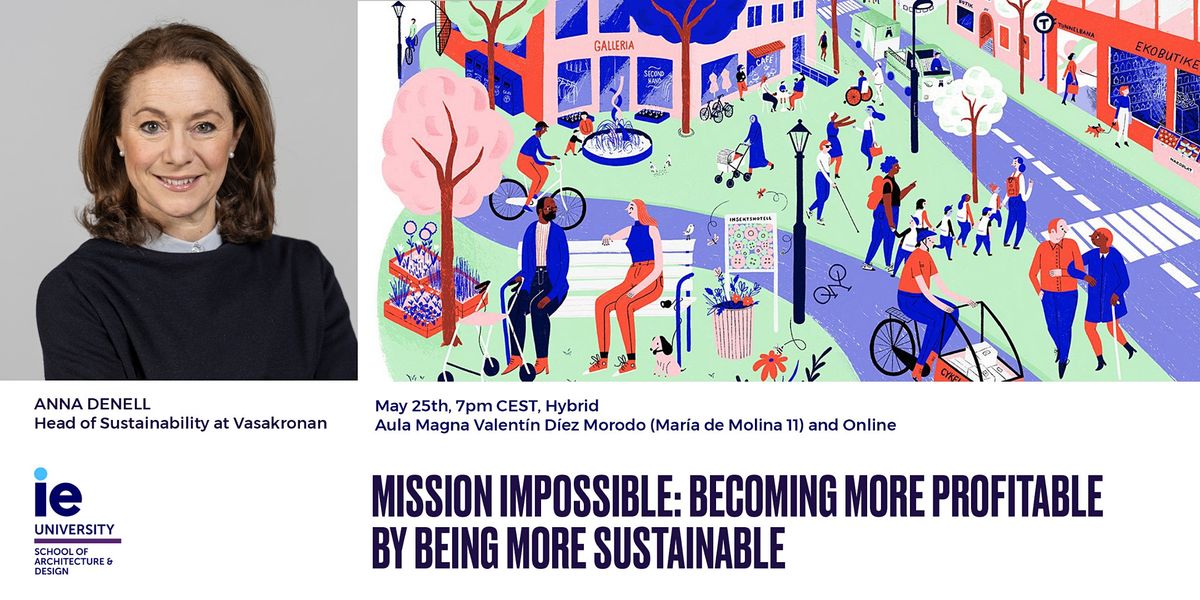 Advertisement
Anna Denell, Head of Sustainability of Vasakronan, will share how the company became more profitable while becoming more sustainable
About this Event

Being sustainable and yet achieving a high return of investment seems like a mission impossible to some, but not for Vasakronan, Sweden's largest property company.

By integrating sustainability in all of the company's operating activities and engaging each and every employer, Vasakronan makes sure that it generates a high, risk-weighted return to its owners (first, second, third, and fourth Swedish National Pension Funds), while making a profit for Sweden's current and future pensioners, though never at the expense of the environment and people.

During this lecture, Anna Denell, Head of Sustainability at Vasakronan, will share how the company became more profitable by being more sustainable.

Anna Denell, as Head of Sustainability at Vasakronan, has overall responsibility for the company’s sustainability strategy. Anna began her career in the property industry in the mid 90’s and joined Vasakronan in 1999. Since then she has held various positions including that of Head of Business Unit, Stockholm.

Anna received her master’s degree in civil engineering from the Royal Institute of Technology in Stockholm in 1995. As Head of Sustainability at Vasakronan, Anna’s been part of transforming the Swedish property industry, where Vasakronan is now considered the industry leader, also including playing a key role in founding a Green Building Council in Sweden, introducing green leases to the Swedish market and issuing the world’s first corporate green bond in November 2013. As Head of sustainability, she has also been given the opportunity to engage in how to combat the environmental threats facing humanity without infringing upon company’s profitability and people’s wellbeing.

Along with her position as Head of Sustainability at Vasakronan, Anna also holds and have held positions as member of the advisory board for Swedish Smart Grid (appointed by the Swedish Government), member of the advisory board for Wood in Construction (appointed by the Nordic Council of Ministers). Anna is the chairwoman of “Hall Nollan” (Zero Accidents in the Construction Industry) as well as board member of “Solkompaniet AB”, “Mistra Carbon Exit” and “LFM30”.

Anna is a well-known presenter and lecturer both in the Swedish property industry and in various universities and institutions in Sweden. In March 2013, Anna was appointed “the Stockholmer” of the month, for her contributions to a more sustainable society. In October 2015, she was appointed “person of the year in the built environment” by the organization “Samhällsbyggarna” (Swedish professionals for the built environment), in April 2018, she was awarded Greenbuild Europe Leadership Award, in March 2019, she got the award “Swedens best Sustainability Director” and in December 2020 she was given the honorary award by “Stockholms Byggnadsförening”’s Jubilee fund. For the last six years, Anna has also been appointed “One of Sweden’s 100 most powerful environmentalists”.

Construction in MadridJubilee-weekend in Madrid