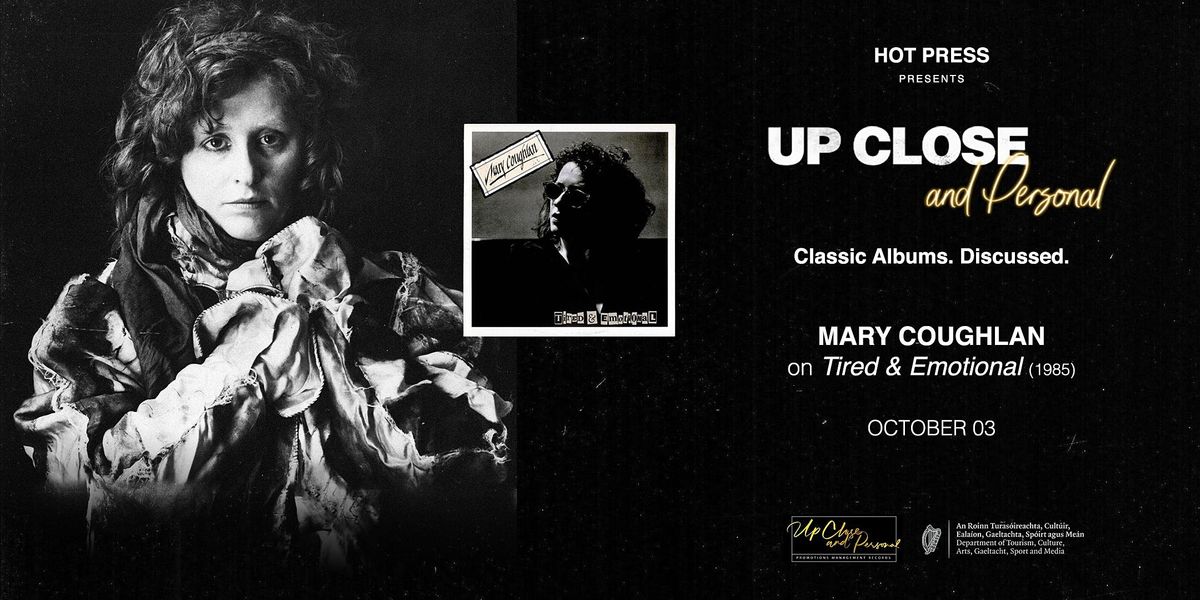 An Evening with
Mary Coughlan

Hot Press Announces: Up Close and Personal series at The Grand Social Celebrates Six of the Greatest Irish Albums of All-Time

Live at the Grand Social, this intimate discussion series will be a deep dive into seminal Irish albums, as we talk to the artists behind the music. Are we looking forward to it? Damn right we are!

Hot Press is proud to announce Up Close & Personal, a series of live conversations with the artists behind seminal Irish albums, to take place at the Grand Social, Dublin.

This intimate discussion series will be a deep dive into a number of classic Irish albums with the artists who created them, talking about the background, the songs, the recordings and the mood of the times in which they were created. It promises the most fascinating insights into some of the greatest Irish albums ever recorded.

The line-up of this initial series will feature Villagers, Gemma Hayes, Mary Coughlan, Andy Irvine & Donal Lunny, Tim Wheeler of Ash and Damien Dempsey, and will take place live at The Grand Social Dublin across six dates from September 28th to October 20th.

At these one-off listening parties, we’ll bring the lucky ticket-holders into the heart of the writing, recording and release of the album in question, as told live – and in person – by the artist that was at the heart of an outstanding creative achievement. And of course, we’ll listen to the album along the way, allowing listeners to experience the music again, in all its power and glory!

“We’re really looking forward to the Up Close and Personal series,” Hot Press editor Niall Stokes said. “Over the course of six nights this month and next, some of the most important – and brilliant – albums in Irish music history will be revisited and explored in a unique way, with the artists themselves offering both personal and musical insights. I don’t want to single any of these albums out, because they all represent unique, landmark moments in Irish music. It is going to be really special.”

Only 50 tickets will be available per show. This special series of intimate conversations, is produced in association with Aidan Shortall of Up Close and Personal Promotions and supported by the Department of Tourism, Culture, Arts, Gaeltacht, Sport and Media. Tickets go on sale at 9am tomorrow, Friday 10 September, for €20 from eventbrite.ie

September 28th - Villagers on Awayland: An album of remarkable poise and beauty, Awayland is the highly acclaimed second album from Villagers. Released in 2013, it deservedly won the Choice Music Prize that year, and was hailed for its powerful and wonderfully literary songwriting. Confirming Conor O’Brien as one of Ireland’s most brilliant wordsmiths, it remains an important and influential benchmark for Irish songwriters who aspire to greatness.

September 29th - Gemma Hayes on Night On My Side: Released in 2002, Night On My Side is Gemma Hayes’ beautiful and brilliant debut album. Produced by the legendary Dave Odlum, and packed with gorgeous songs, Night On My Side was nominated for a Mercury Music Prize. Gorgeously arranged and soulfully delivered, it established Gemma Hayes as an iconic Irish voice – and a very special songwriter indeed.

October 3rd - Mary Coughlan on Tired and Emotional: Mary Coughlan's debut album catapulted her to overnight fame in 1985, drawing comparisons with the work of Peggy Lee, Billie Holiday, Van Morrison and Edith Piaf. After an outstanding appearance on the Late Late Show, the record went on to sell a remarkable 100,000 copies in Ireland, establishing the soulful blues singer as a unique powerhouse in Irish music.

October 18th - Tim Wheeler (Ash) on 1977: Recorded with producer Owen Morris – who would later mastermind Oasis finest moments – while the three members of Ash were still in school, 1977 is the phenomenally successful debut album from the Downpatrick outfit. Debuting at #1 in the UK charts, the brilliant punky pop songs masterminded by Tim Wheeler, established Ash among Northern Ireland’s finest ever.

October 19th - Andy Irvine & Donal Lunny on Planxty: Released in 1973, Planxty – the debut album from the band of the same name – rescued Irish folk music from the leather-elbowed ballad groups. With uilleann piper Liam O’Flynn joining Donal Lunny, Andy Irvine and Christy Moore in what was a folk super-group, they combined songs and tunes in a marvellously innovative mix – irrevocably changing the course of Irish music completely in the process.

October 20th - Damien Dempsey on Seize The Day: Damien Dempsey's sophomore album, produced by John Reynolds and released in 2003, confirmed the Donaghmede man as one of Ireland's greatest singer-songwriters. The following year, it scored him the only ever double win at the Meteor Music Awards 2004. Featuring the talents of Sinead O'Connor and the legendary Brian Eno, Seize the Day confirmed Dempsey’s status as a folk genius, capable of standing alongside Luke Kelly and Ronnie Drew.