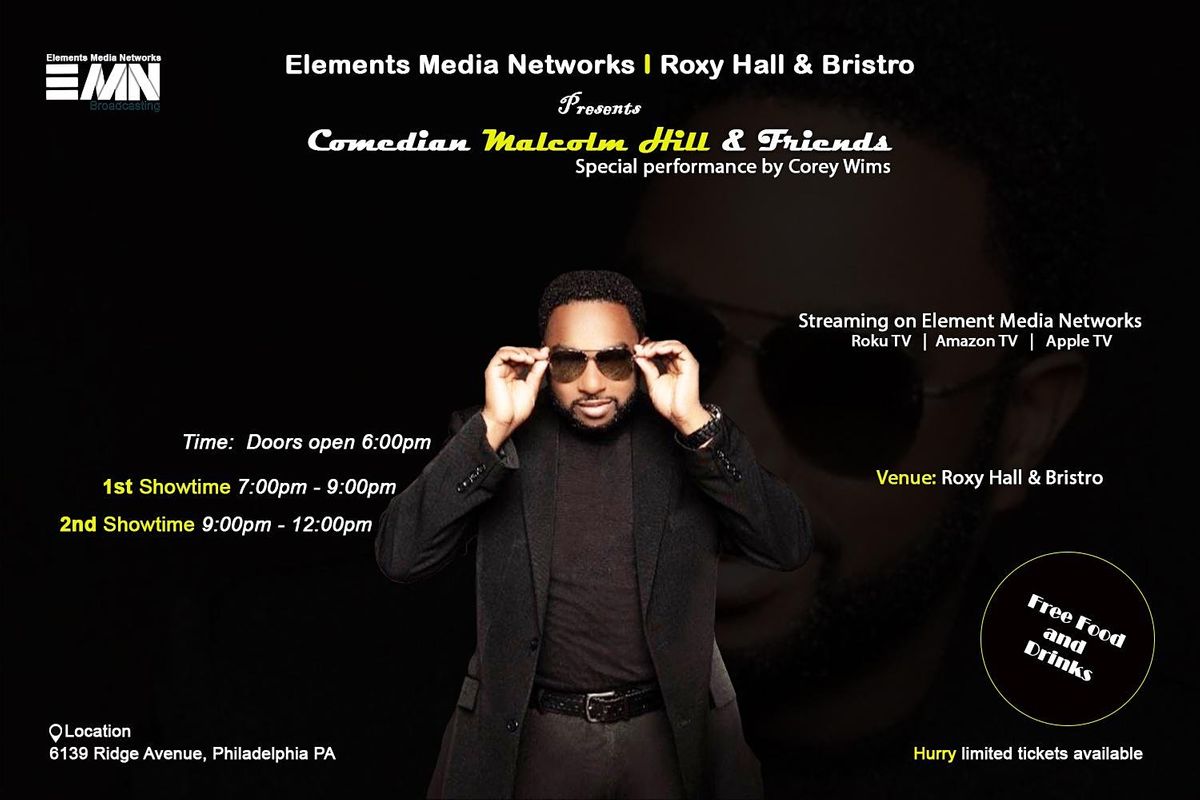 Join Us at Philadelphia's newest Caribbean Soul Fusion restaurant (Roxy Hall & Bistro) and Event of the Year with a live recording that will be broadcasted on Elements Media Networks through Roku TV, Amazon Fire TV and Apple TV!

Comedian Malcolm Hill will be performing a live broadcasting with friends. Special performances by Corey Wims, EMNWIRED987.COM own DJ Nophrillz and DJ Macky.

Enjoy an evening amongst associates, friends and colleagues who want to eat, drink and laugh.

Home from School with nothing to do, here's your chance to be on television.

Network with other businesses, entrepreneurs & socialites

Establish hundreds of new & valuable contacts in the Entertainment Industry

Interact with the movers and shakers in the Tri-State Region.

FREE Street Parking; Every Saturday between Thanksgiving and Christmas, metered parking is free after 11AM.

WANT TO EXHIBIT YOUR FEATURE FILM/TV SHOW/DOCUMENTARY/SERVICE & GET SALES LEADS?

If your product/service targets business owners, coming at this show is a must. Many business owners attend events for innovative products & services that will help their business grow. Nowhere else can you reach thousands of business owners and potentially make on-the-spot sales in one day! Elements Media Networks Distributes their broadcast to 96 different countries.

For more info, call us at 800.494.1739 or VISIT OUR MAIN INFO PAGE FOR PRICING & INFORMATION. WWW.ELEMENTSMEDIANETWORKS.COM 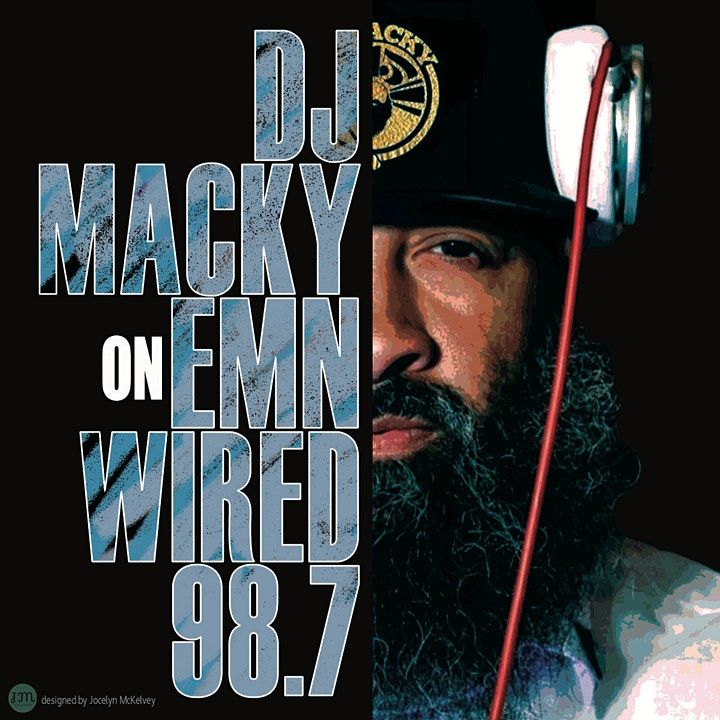 Phamous Phrillz was born and raised in uptown Philadelphia Pa. Began his dj career at the age of 15. His brothers were all rappers and dancers. Who would have known having simple family time with his mother, father and brothers would later influence him as a DJ. Not long after getting into a major accident almost losing his life. With the money from the negative. He turned into a positive and bought his first piece of DJ equipment, the Gemini XL- DD50 and Gemini scratch master mix with sampler on it.

He still didn't have a name yet. One day reading the "Legendary Roots Crew" single called "Clones" album cover at the bottom he noticed it said 'No Frills". Which then sparked an idea. Just like that, the infamous DJ NoPhrillz was born. In the beginning of his career he tested the waters. Becoming a Djin for a group called the "Tangle Thoughts". Always trying something new. Not long after he decided to adventure into DJ battling. Later losing his first competition to DJ Ghetto. However, Phrillz wasn't about to give up.

He went back to the lab and reinvented himself. Rebranding, becoming more raw, sharp and clean with his style of djing. Mastering the techniques of "Mashing up & Mixing". Determined to be the best. Earning the title of one of the first radio host/Dj's to become a popular internet radio show called "Official Street Radio". Being the F'in top of the line required to stand out. So the question is "not why...but why not" as he says. Only to come up with a catchy worldwide drop " Let it Play, Ahhh, Got'chu!", and the creator of one of the most popular sayings in the City of Brotherly Love called "Philly Support Philly" aka "PSP". Phrillz always loves to get other DJS on other platforms. By helping build Coalitions for DJs in his hometown. Mr. Ahhh Got'chu's most memorable moments in his career were being on Sway in the Morning, Power 99 Fm's DJ Battle, LL Cool J's Rock The Bells Radio, RS Radio in NYC and other internet/podcast shows like Airitoutradio and UE Radio.

Always expanding his band into radio host, being a tastemaker, journalist, videographer, photographer, producer and an Advocate for unsigned artists. Working with major celebrities such as LL Cool J, Black Thought from the Legendary Roots Crew, Meek Mill and Freeway, Nipsey Hussle just to name a few. Also crossing international barriers with his late great friend Rich Quick. " I'm with the DJ '' hosted by DJ NoPhrillz and Benja Styles mixtape would later land them in a market overseas with success.

Appearing on major television shows as a guest DJ on "Philly MTV Day" and "The Hack" as an extra. Being placed on a billboard on the popular street of Philadelphia Broad & Erie. Spotlight placements in HipHop weekly Magazine, Crack DVD featuring French Montana, Coast2Coast Magazine, World Star, HipHopDx "Chillin Grill Series" and five year straight run on the "Philly HipHop Awards as the official DJ. Supporting organizations such as the "Olive Dance Theater", "National Kidney Foundation'', and Philadelphia's Eagle running back "Shady" aka Lesean McCoy's with the Lesean McCoy Foundation.

Let it Play! Was all you heard on some of the hottest mixtapes out worldwide. Some of his greatest mixtapes are the Young Hot Mixtape "It's getting hot out Vol 1", "Phuck Philly Vol 1&2" and "Beanie Sigel vs Notorious B.i.g''. Being co-signed by Sway from Sway in the Morning, and LL Cool J just helped raise the bar. Advancing him with honors. Others also recognized his skills and talent. Earning several Philly HipHop and Fleet DJ Awards.

Being heavily influenced by his father, DJ Jazzy Jeff, DJ Cash Money, DJ Kidd Capri, and DJ Ghetto. Earning respect in the game came with benefits. A popular DJ in the city known as DJ Curt recognized his persistence. Gave him a chance to be one of the first DJs on Sneaker Villa. He later grinded so hard. Was promoted to chief of DJ position at Sneakvilla/RUVilla. Or to some known now as DRTL. He is still a veteran DJ and special Guest judge at Coast2Coast Events.

Some of his favorite cassettes tapes are the "Yellow Tape" by Master Ace, Diamond D "Stunt Blunts & HipHop" and "Reel to Reel" by Grand Puba. Favorite group "A Tribute Called Quest".

With over 10,000 mixtapes under his belt. One of the biggest mixtapes that Phamous Phrillz recalls bringing a lot of attention to his career was from the "King of Pop" Michael Jackson. He would be the first DJ to cover his greatest hits after his passing which made tv national headlines. When you need a DJ. Phamous Phrillz as he quotes " is top of the line, the Maybach of this ish" and mainly the top DJ to get booked in Philadelphia for major events. Performing at the biggest venues in the city such as The Dell, The Famous Rocky Stairs, Philadelphia Art Museum, Tla, Voltage, Arts Garage, Academy National Science and more. 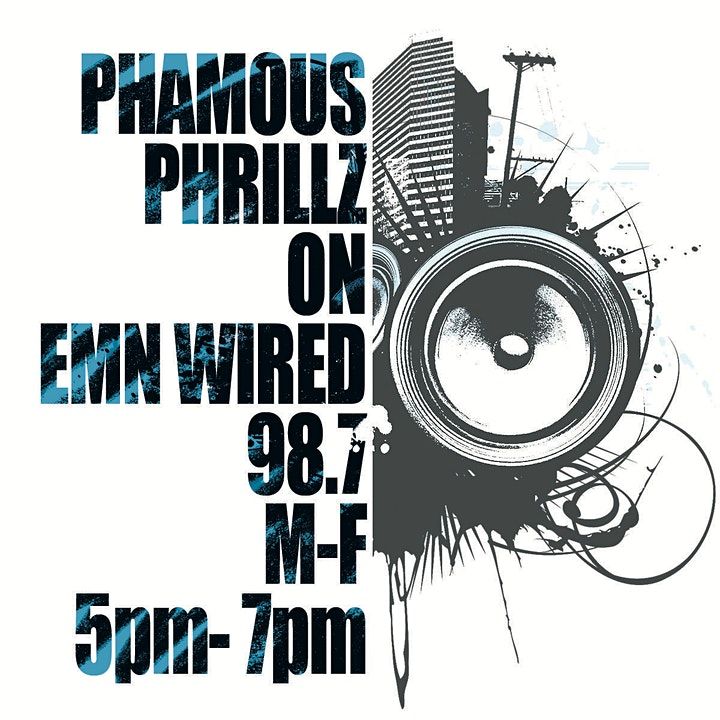 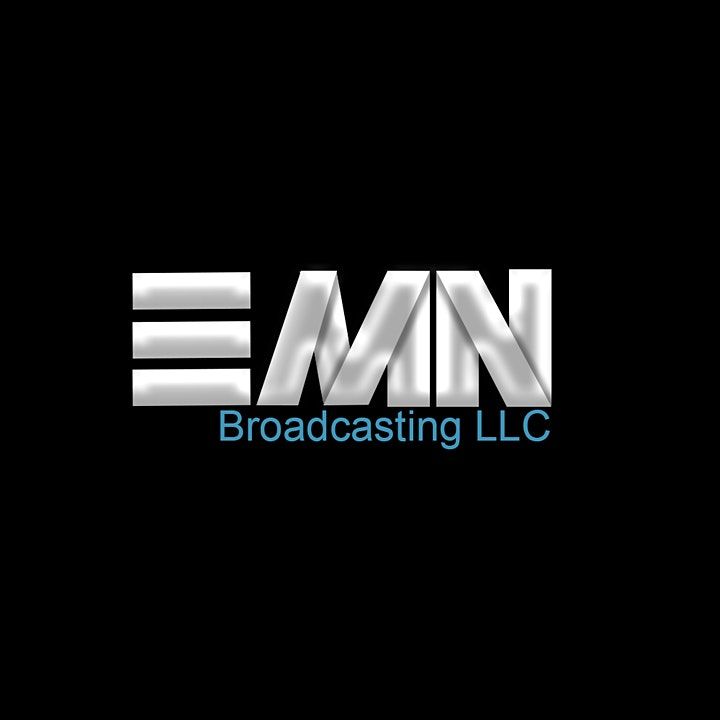 As Featured in FOX CBS and NBC”

If you would like more information, or to Sponsor or Exhibit at one of our events, please call us at (800)494-1739 or visit us online at WWW.ELEMENTSMEDIANETWORKS.COM 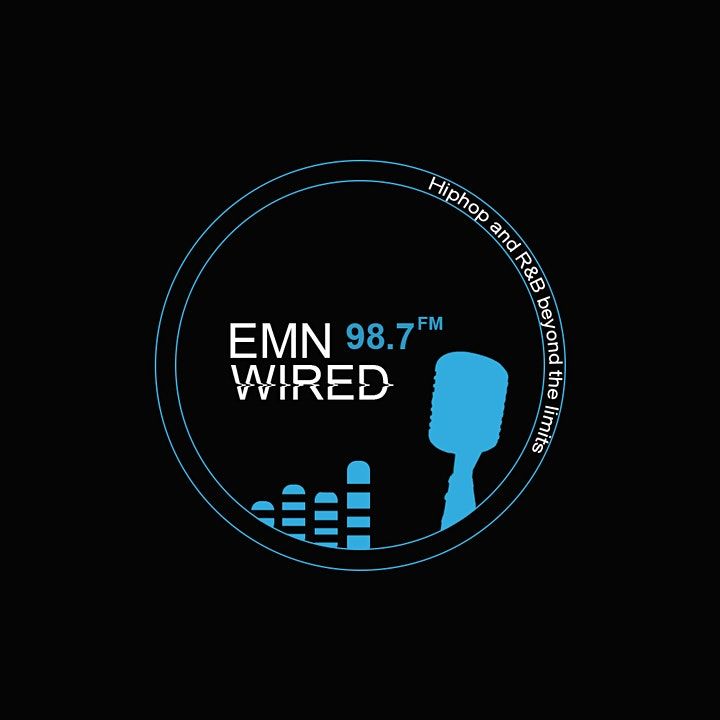 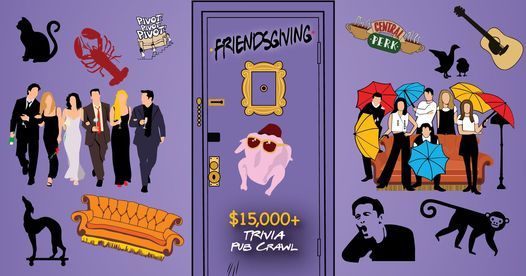 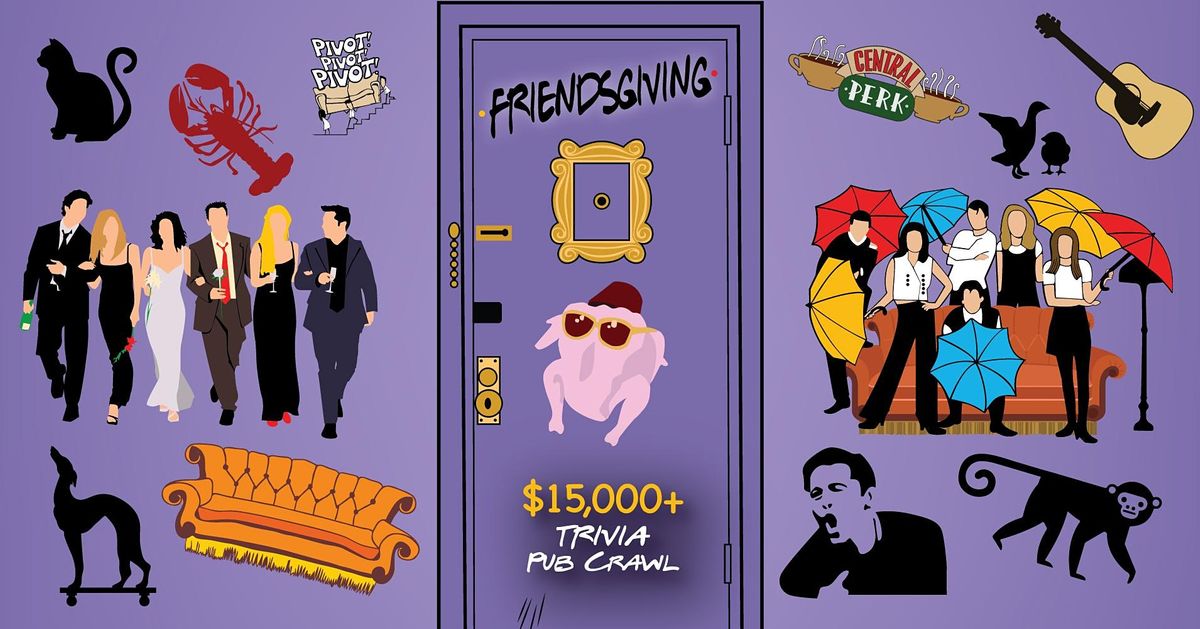 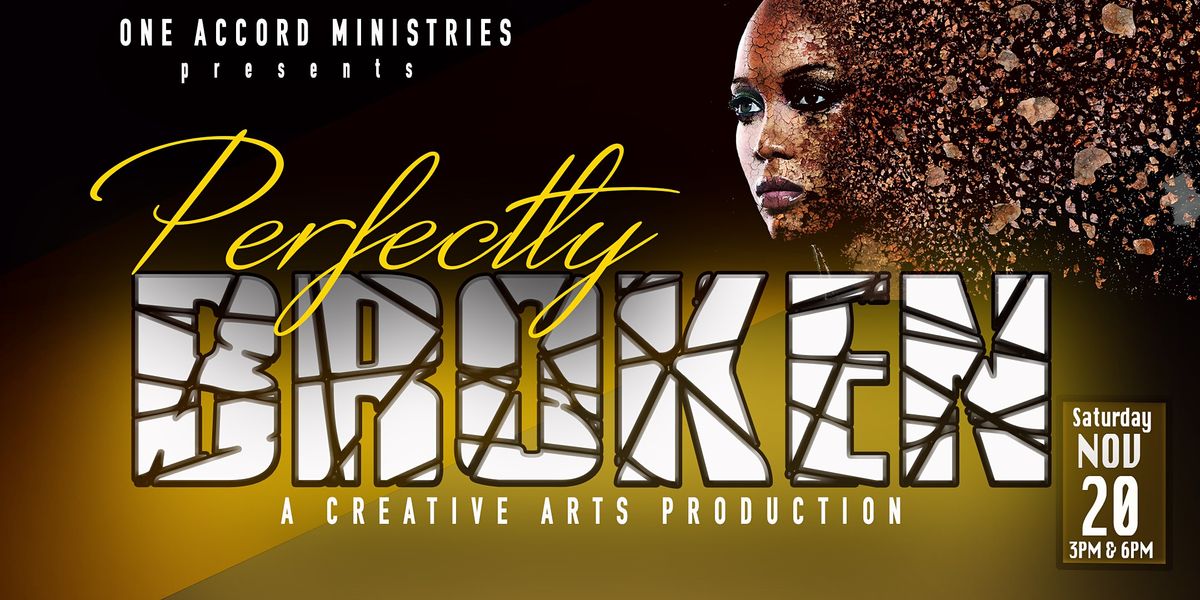 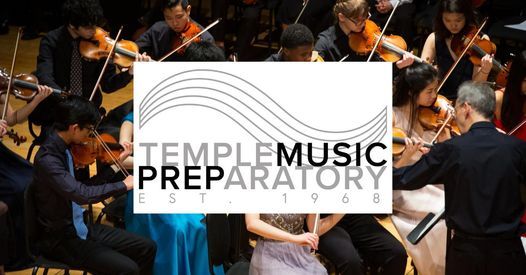 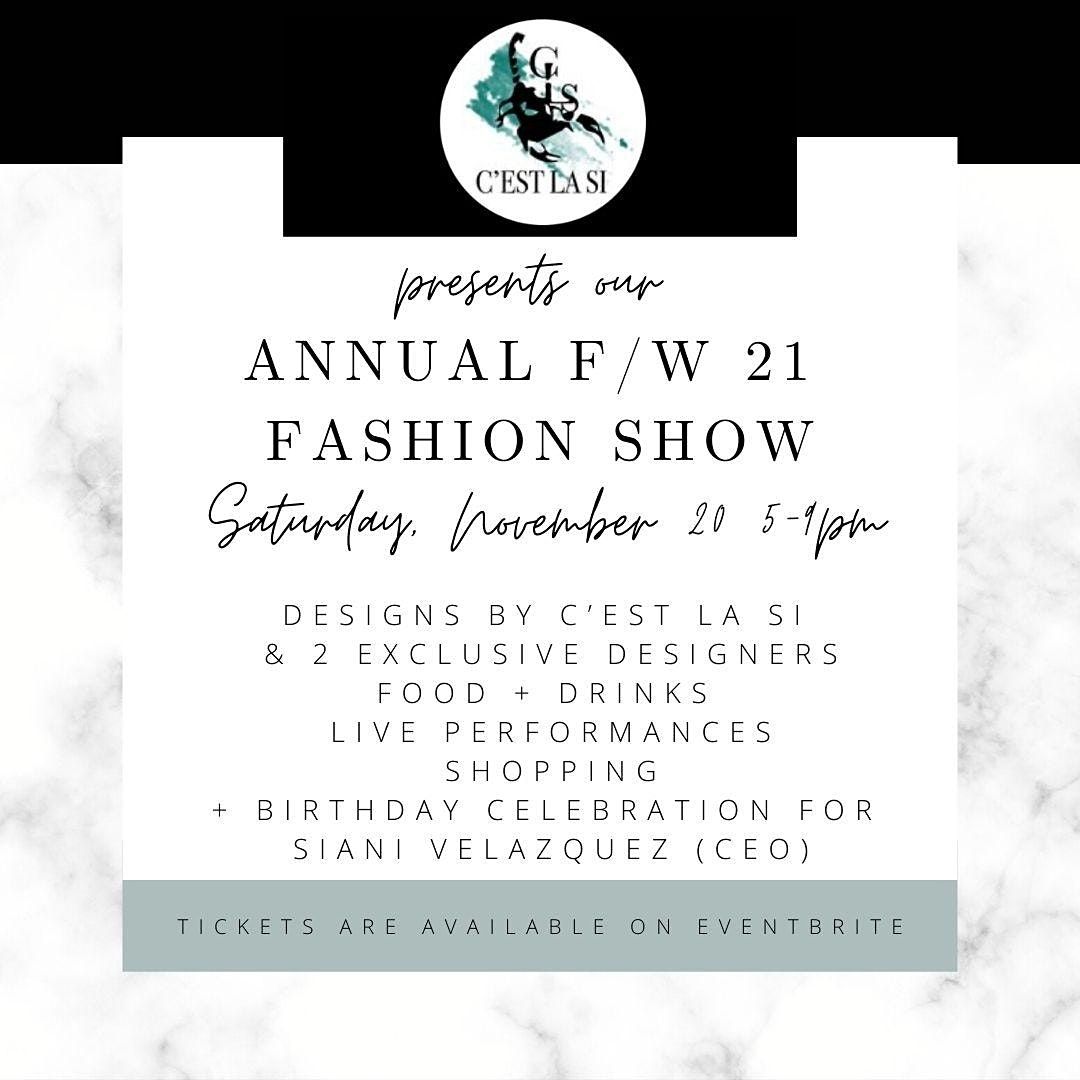 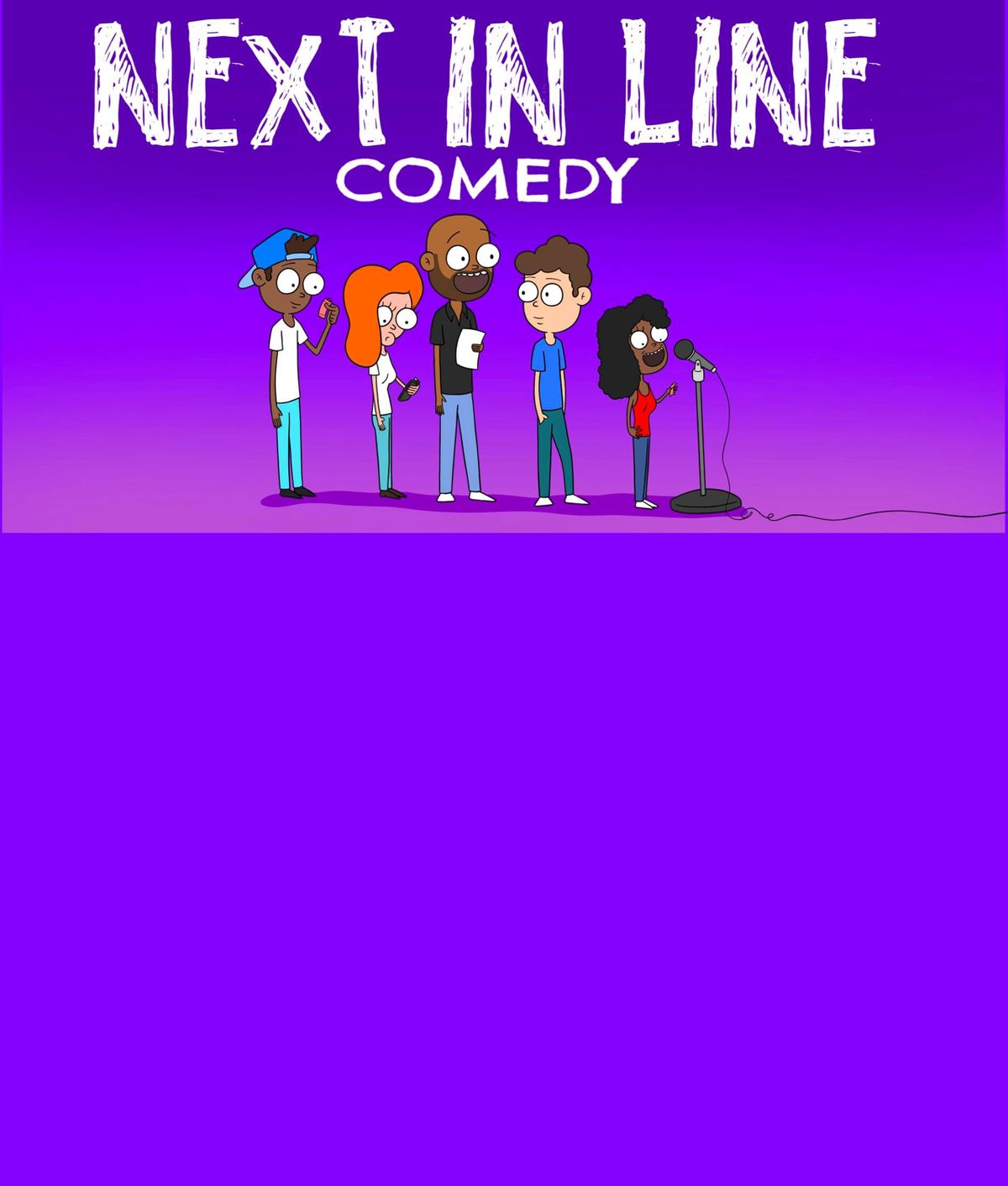 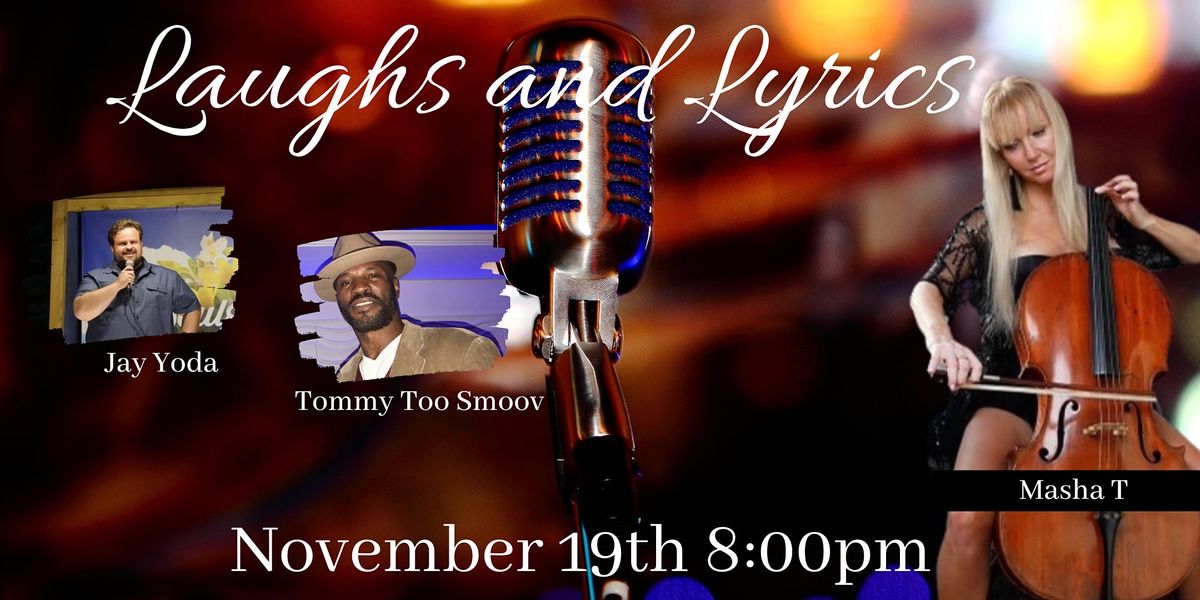 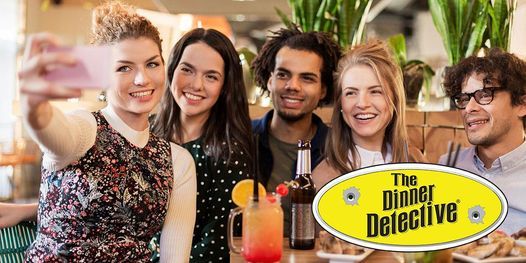 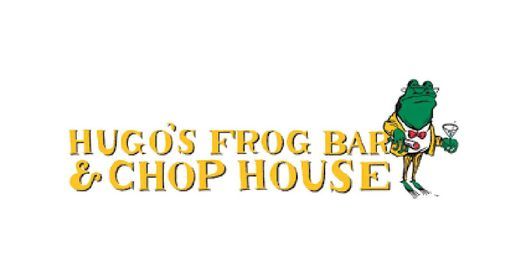 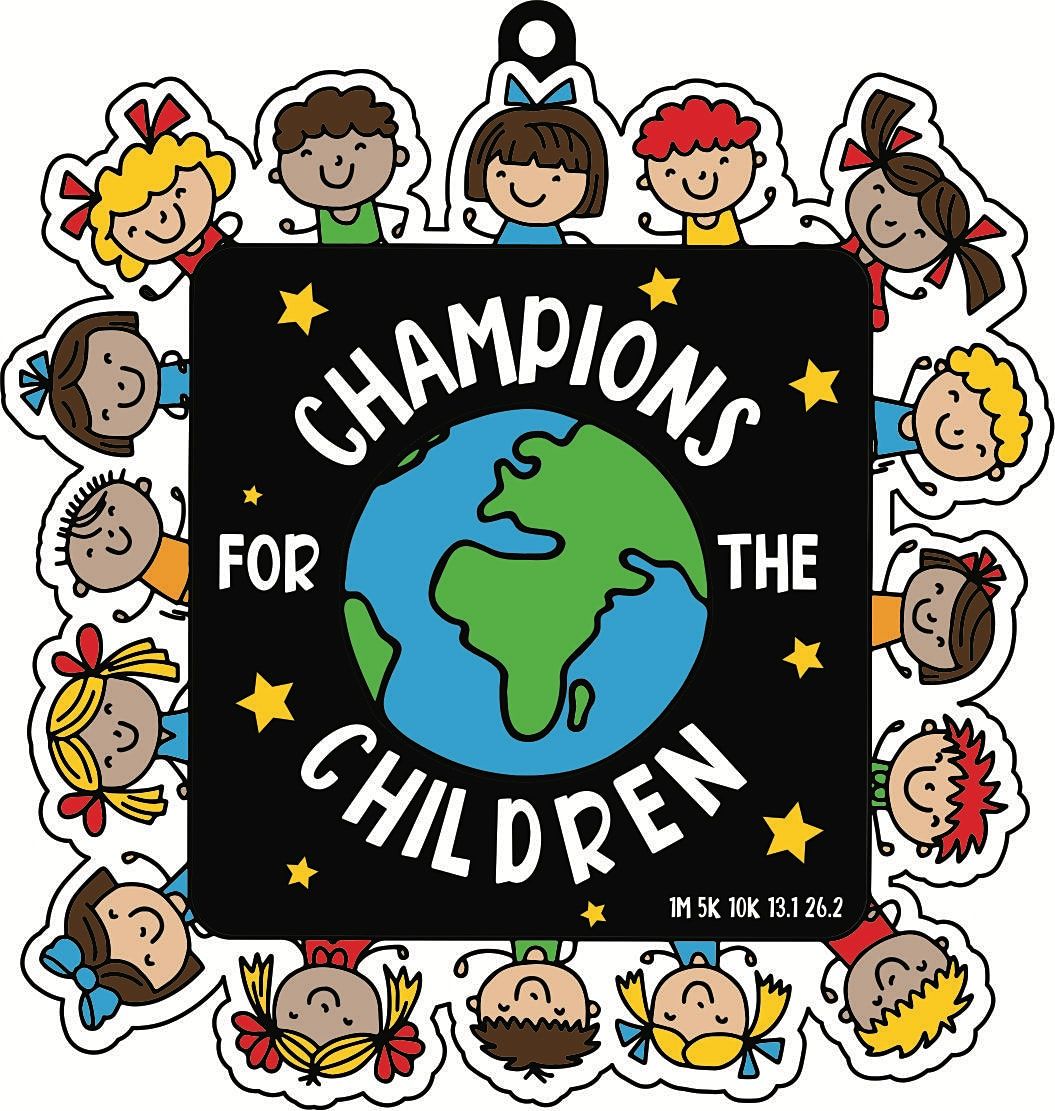 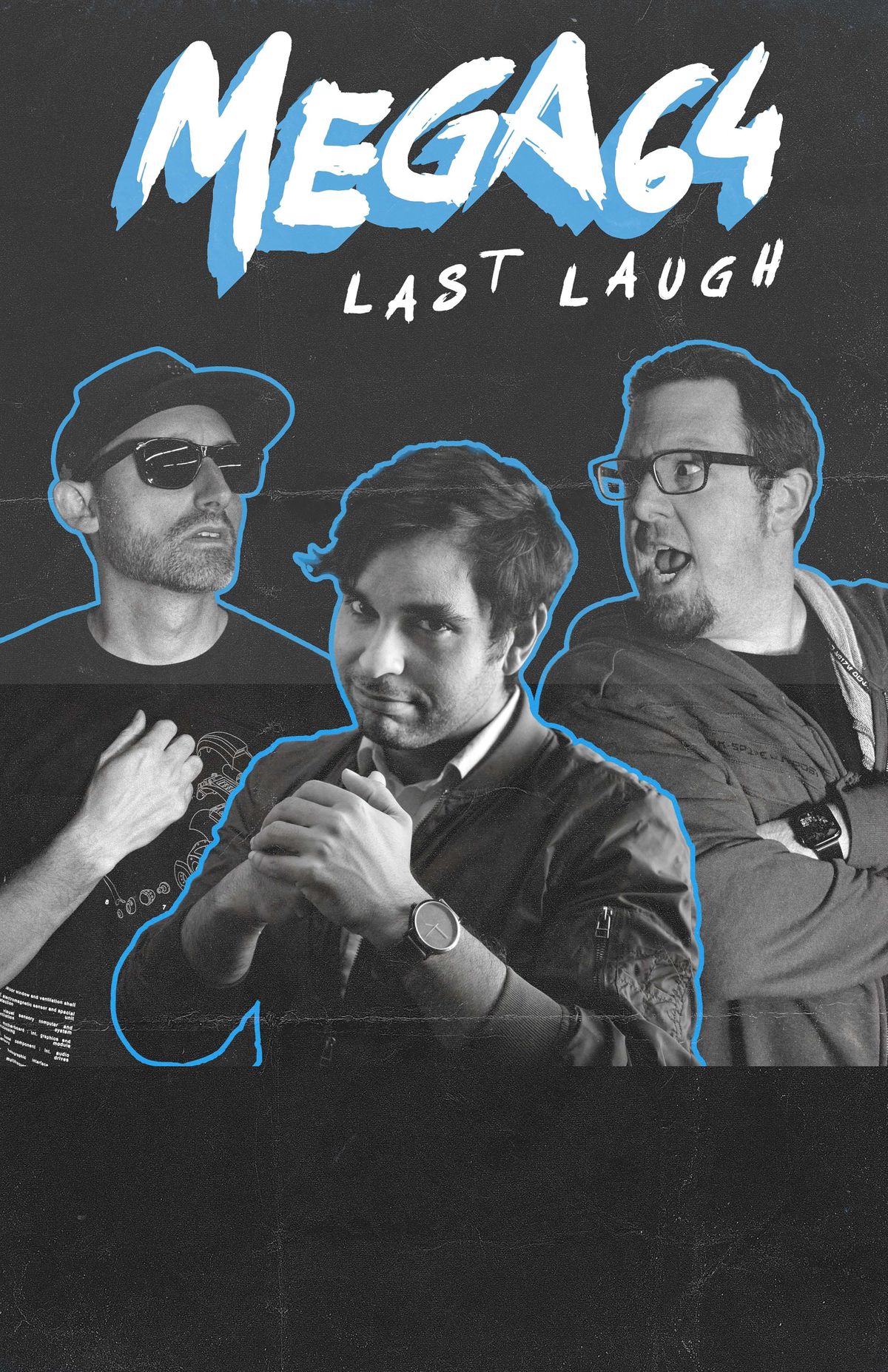 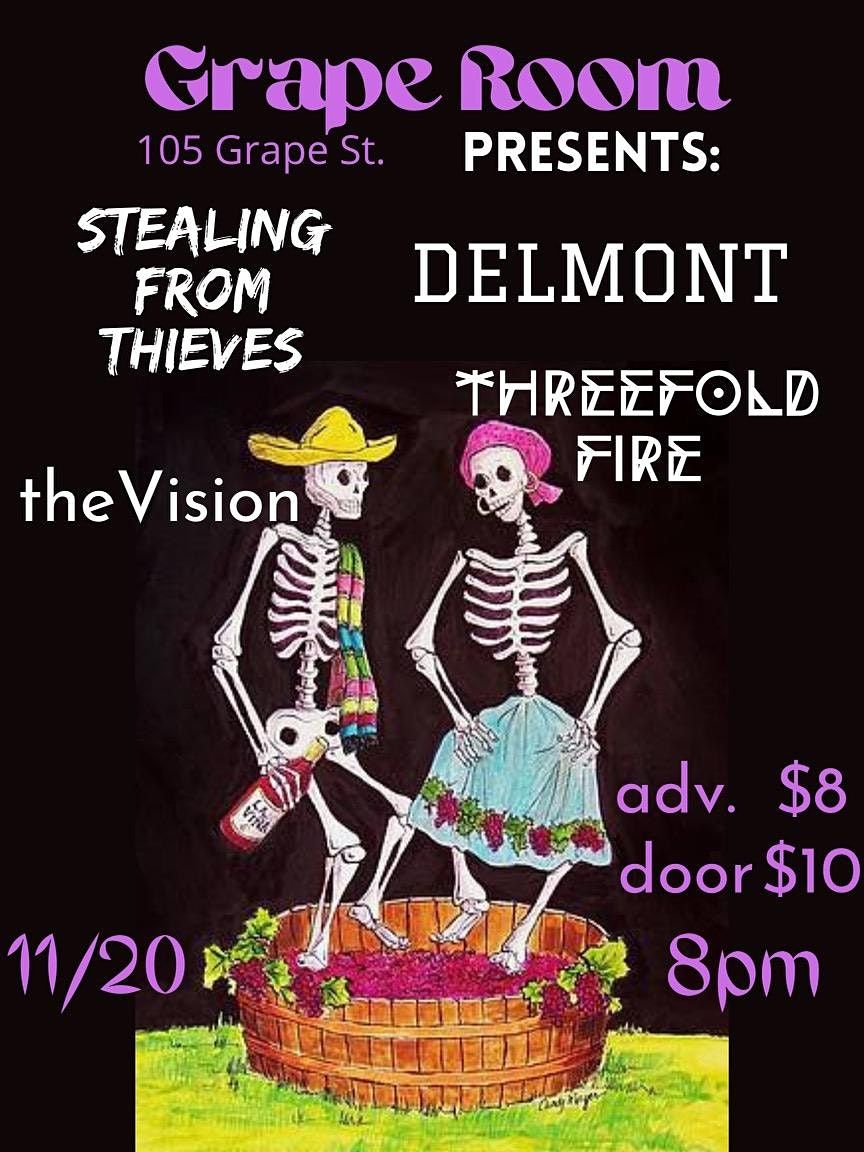