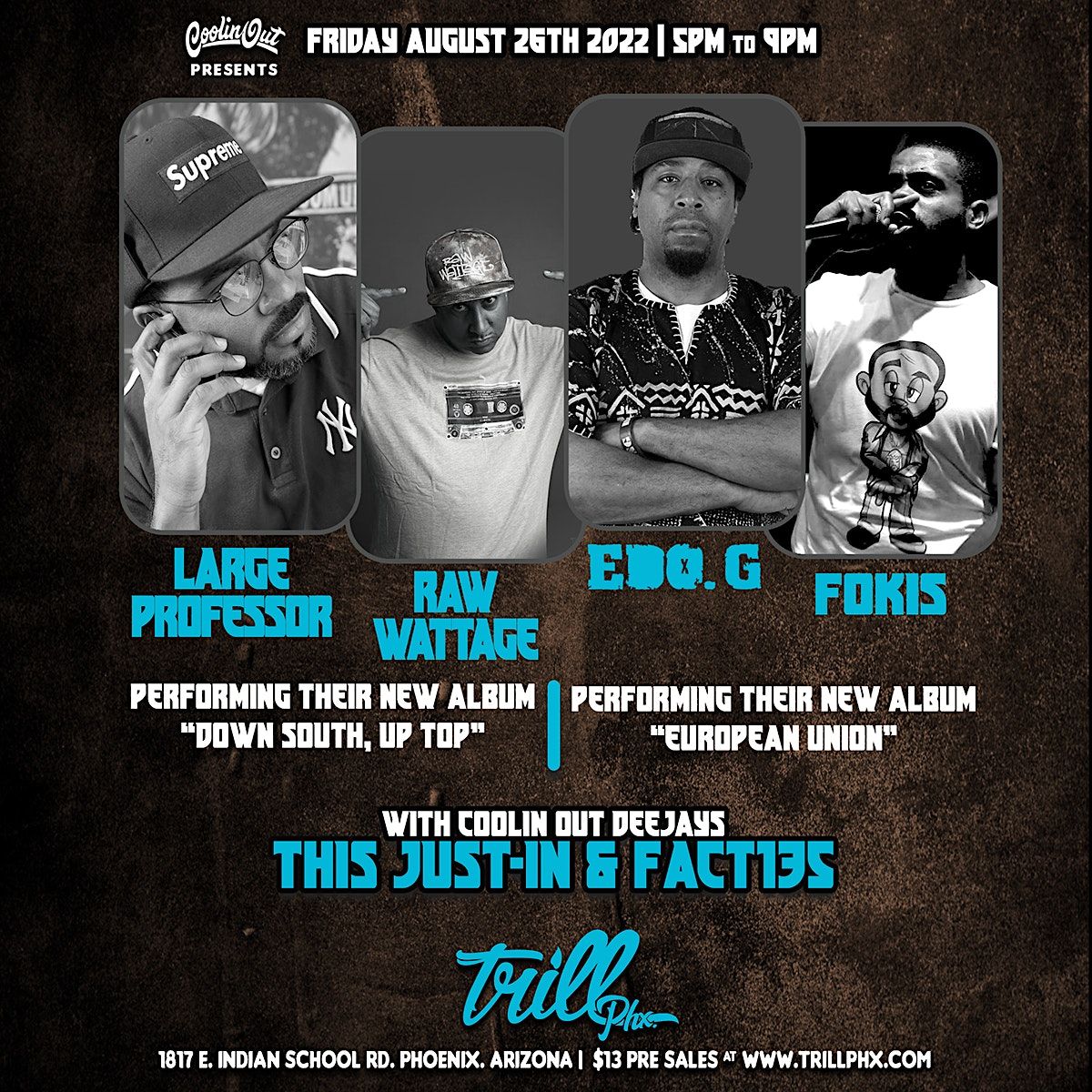 Coolin’ Out Entertainment is proud to present the You Had To Be There Tour featuring Large Professor, Raw Wattage, Edo.G, and Fokis live and direct from Trill Hip Hop Shop on Friday, August 26th!

Large Professor (aka Large Pro & Extra P.) has been a pillar of hip hop for more decades than some of you have been alive. As an MC he is a founding member of Main Source and has put out several solo albums and has been featured on countless tracks. Aside from his natural lyrical ability, Large Pro is also an incredible producer and DJ. He has worked with some of the biggest names in hip hop such as Nas, A Tribe Called Quest, Kool G Rap, Mad Skillz, Lord Finesse, Pete Rock, N.O.R.E., and Czarface just to name a few. His contributions to hip hop are insurmountable by most.

Raw Wattage is a lyricist hailing from Columbia, South Carolina and relocated to New York City. His style is a perfect blend of East Coast and Southern hip hop. He has worked with names such as Large Professor, Ras Kass, and Tradegy Khadafi, and AB Money. He is a perfect addition to this tour’s lineup.

Edo.G was born in Boston Massachusetts and was, for the most part, responsible for putting Boston on the map for hip hop. He formed the group Ed O.G and Da Bulldogs and put out the classic album, Life of a Kid in the Ghetto. After his 2nd album with Da Bulldogs, Edo. G began a long and prosperous solo career. He has worked with names such as DJ Premier, Pete Rock, Marco Polo, Masta Ace, Big Shug, Sadat X, and Guru, as well as many others.

Fokis was raised in New York City’s Lower East Side of Manhattan. The LES native has put out a few albums, some singles, and has been on several collab projects. Fokis also runs a recording studio, Krystal Clear Recordings, and is a rather talented producer. He has worked with the likes of Joe Budden, Punchline, Joell Ortiz, Shabaam Sahdeeq, Edo G., Jake One and has opened up for names such as Onyx, The Game, Gza, Ras Kass, Lords Of The Underground, Common, Busta Rhymes, M.O.P., The Beatnuts and more.

Additional support will be provided by Coolin’ Out DJs Fact135 & This Just-In.

This is an ALL AGES event so bring the whole family!