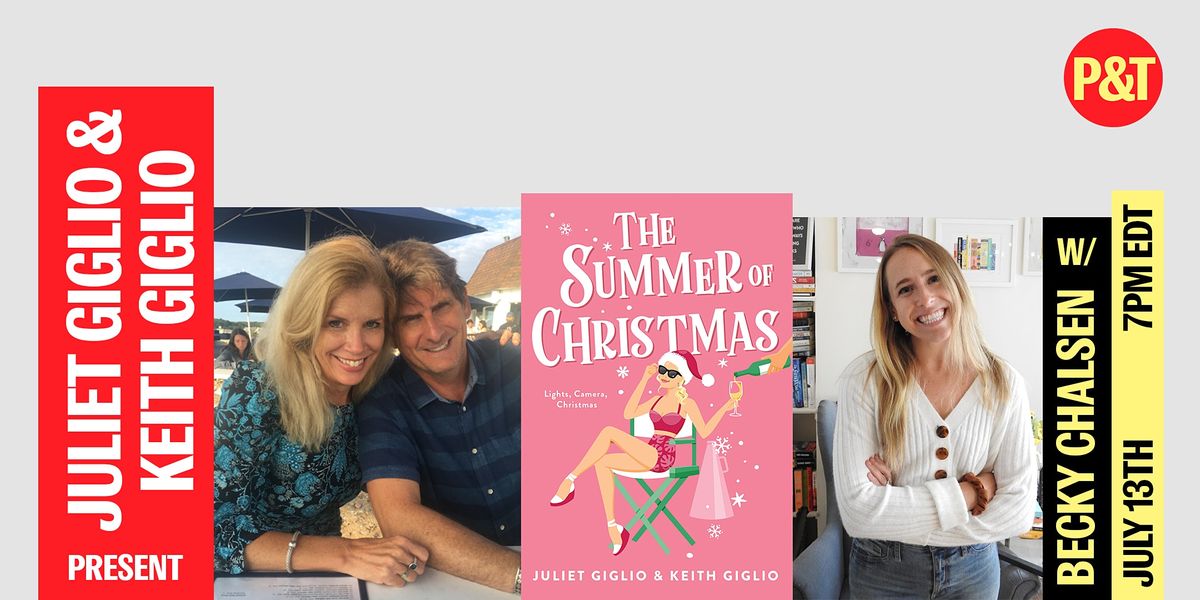 Advertisement
Don't miss this adorable romcom from Hollywood screenwriters who bring you into the wild world of making those TV Christmas movie.
About this Event

P&T Knitwear welcomes husband-wife screenwriting duo Juliet and Keith Giglio to celebrate the launch of their debut rom-com novel, The Summer of Christmas. The authors will be joined in conversation by Becky Chalsen.

July is a great time to celebrate Christmas! Don't miss this adorable romcom from Hollywood screenwriters who bring you into the wild world of making those TV Christmas movies:

Up-and-coming LA screenwriter Ivy Green is about to have her life turned upside down. Her movie, based on her and her high school sweetheart, Nick Shepherd, is being filmed in her hometown. In the middle of summer, during the month of July, the production crew creates a winter wonderland Christmas.

Nick is less than thrilled to see Ivy after all this time. To complicate matters, Ivy isn't sure of her relationship with the producer, the town is overflowing with movie stars and adoring fans, and worst of all—the actress playing Ivy develops a crush on the real Nick! Now, with renewed and confusing feelings about Nick, Ivy is determined to see if there is anything left between them, but in the end, Ivy will need to re-write her life script to get back everything she thought she lost.

Juliet Giglio and Keith Giglio are a husband-wife screenwriting duo who met cute in an elevator while attending NYU Grad Film school. Their produced films include most recently Reba McEntire’s Christmas in Tune, Dear Christmas, A Very Nutty Christmas, and Christmas Reservations. Other credits include Disney’s Tarzan, Pizza My Heart, Return to Halloweentown, Joshua, and A Cinderella Story. Juliet and Keith are both professors who teach screenwriting at SUNY Oswego and Syracuse University, respectively. They divide their time between Syracuse and Sag Harbor.  Their first novel, THE SUMMER OF CHRISTMAS, publishes in July 2022.

Becky Chalsen is a novelist living in Brooklyn, New York. Her debut novel Kismet will publish in Summer 2023 by Dutton. When not writing, she works as a film/TV development executive at Sunday Night.