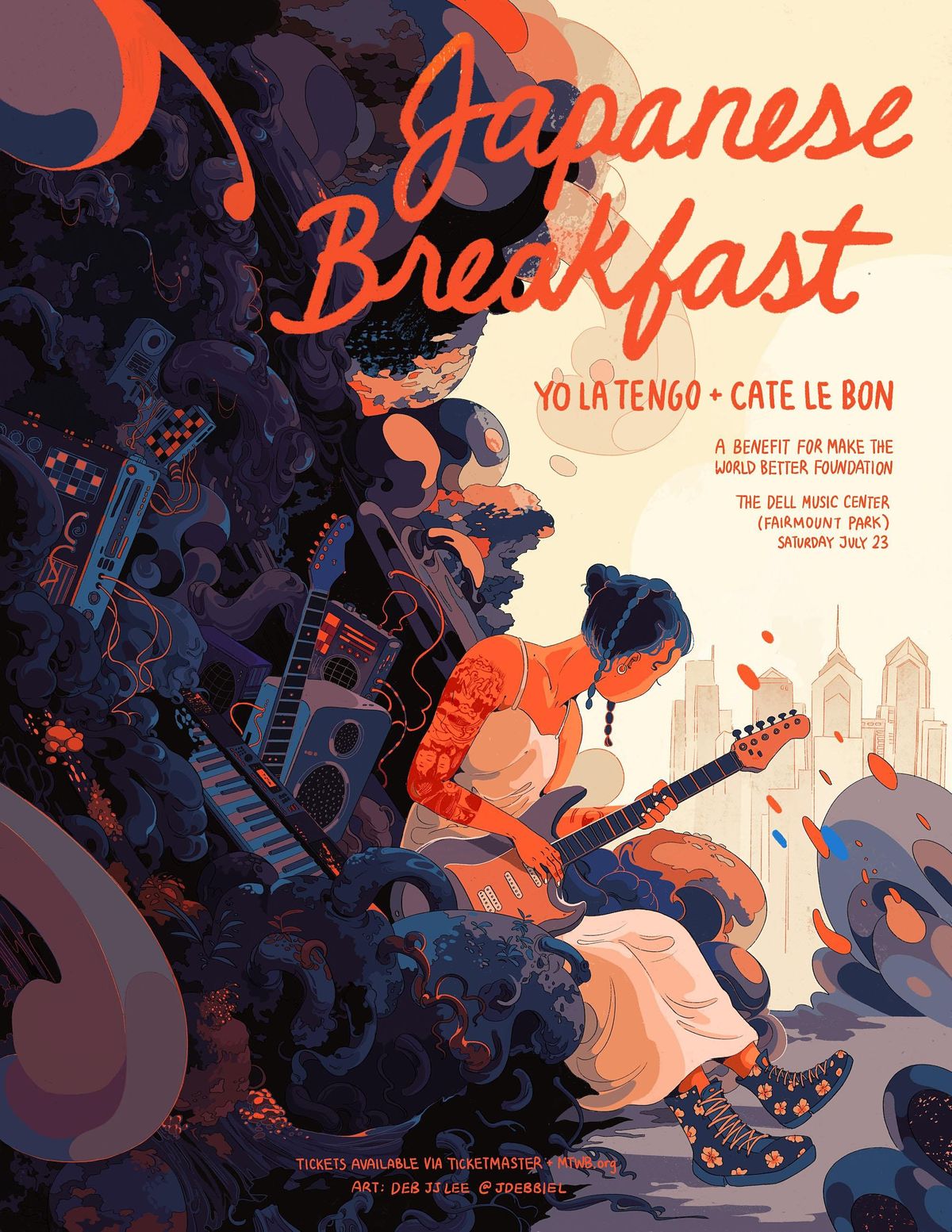 From the moment she began writing her new album, Japanese Breakfast’s Michelle Zauner knew that she wanted to call it Jubilee. After all, a jubilee is a celebration of the passage of time—a festival to usher in the hope of a new era in brilliant technicolor. Zauner’s first two albums garnered acclaim for the way they grappled with anguish; Psychopomp was written as her mother underwent cancer treatment, while Soft Sounds From Another Planet took the grief she held from her mother‘s death and used it as a conduit to explore the cosmos. Now, at the start of a new decade, Japanese Breakfast is ready to fight for happiness, an all-too-scarce resource in our seemingly crumbling world.

How does she do it? With a joyful noise. From pulsing walls of synthgaze and piano on “Sit,” to the nostalgia-laden strings that float through “Tactics,” Jubilee bursts with the most wide-ranging arrangements of Zauner’s career. Each song unfurls a new aspect of her artistry: “Be Sweet,” co-written with Wild Nothing’s Jack Tatum, is a jagged, propulsive piece of ‘80s pop that’s followed by a sweetly melancholic ballad in “Kokomo, IN.” As she rides a crest of saxophones and synthesizers through “Slide Tackle,” a piece of nimble pop-funk run through a New Order lens, Zauner professes her desire to move forward: “I want to be good—I want to navigate this hate in my heart somewhere better.”

In the years leading up to Jubilee, Zauner also took theory lessons and studied piano in earnest for the first time, in an effort to improve her range as a songwriter: “I’ve never wanted to rest on any laurels. I wanted to push it as far as it could go, inviting more people in and pushing myself as a composer, a producer, an arranger.” She pours that sentiment into the album from the very beginning, weaving a veritable tapestry of sound on the opening track “Paprika.” To build such an anthem of self-actualization, Zauner maxed out the technical limits of her recording rig, expelling her anxieties and egoism with layers upon layers of triumphant horns and marching snares. “How’s it feel to be at the center of magic? To linger in tones and words?” she ponders, conjuring the widescreen majesty of Kate Bush. “I opened the floodgates and found no water, no current, no river, no rush!”

Later, on “Savage Good Boy”—a kooky, terrifyingly prophetic jam co-produced with (Sandy) Alex G—Zauner reduces the excess of modern capitalism to an emotional level, sarcastically imagining the perspective of a billionaire trying to convince his lover to join him underground as the apocalypse unfolds. “I want to make the money until there’s no more to be made/And we will be so wealthy, I’m absolved from questioning/That all my bad behavior was just a necessary strain/They’re the stakes in a race to win.”

“I don’t want to weave politics into my music in a way that feels cheap, but I couldn’t make something that doesn’t comment on the reality we live in,” says Zauner. “I think that you need to push yourself to care, and that’s part of what this album is about: If you want change, in anything, you need to go to war for it.”

At the end comes “Posing for Cars,” one of the longest, most visceral Japanese Breakfast songs to date. In its muted opening, Zauner quietly re-embraces impassioned facets of youth—wistful daydreaming, fierce loyalty—atop a bed of slowly-strummed guitars. Those same feelings pour out of her fingertips as she erupts into a cathartic, nearly three-minute-long solo to close out the record, with gradual swells of distortion that evoke the arena-sized guitars of bands like Wilco or Sonic Youth.

Jubilee is an album about processing life and love in the quest for happiness, and how that process sometimes requires us to step outside of ourselves. “Savage Good Boy” isn’t the only time Zauner takes on a persona; On the cavernous masterpiece “Posing In Bondage,” she imagines a woman left behind in the confines of an empty house, traversing the blurred lines between domesticity and dominance as she sings to an absent lover. Meanwhile, “Kokomo, IN” was written from the perspective of a small- town Indiana boy, forced to say goodbye to a girlfriend who’s shipping off to study abroad. But throughout Jubilee, Zauner is hardly fictionalizing her lyrics, instead pouring her own life into the universe of each song to tell real stories, and allowing those universes, in turn, to fill in the details. Joy, change, evolution—these things take real time, and real effort. And Japanese Breakfast is here for it.

Yo La Tengo’s uninterrupted 30-years-and-counting career is unparalleled in its creative breadth and refusal to rest on laurels. Ira Kaplan, Georgia Hubley and James McNew have enjoyed success entirely on their own terms – playing the world’s best concert halls, museums, and dives, collaborating with everyone from Homer Simpson to Ray Davies, from Chris Elliott to Yoko Ono, portraying the Velvet Underground in I Shot Andy Warhol and composing scores for Adventureland and the films of Jean Painlevé, and even creating a holiday tradition unto themselves with their series of Hanukkah shows, from which they’ve donated hundreds of thousands to charity.

Pompeii, Cate Le Bon’s sixth full-length studio album and the follow up to 2019’s Mercury-nominated Reward, bears a storied title summoning apocalypse, but the metaphor eclipses any “dissection of immediacy,” says Le Bon. Not to downplay her nod to disorientation induced by double catastrophe — global pandemic plus climate emergency’s colliding eco-traumas resonate all too eerily. “What would be your last gesture?” she asks. But just as Vesuvius remains active, Pompeii reaches past the current crises to tap into what Le Bon calls “an economy of time warp” where life roils, bubbles, wrinkles, melts, hardens, and reconfigures unpredictably, like lava—or sound, rather. Like she says in the opener, “Dirt on the Bed,” Sound doesn’t go away / In habitual silence / It reinvents the surface / Of everything you touch.

Pompeii is sonically minimal in parts, and its lyrics jog between self-reflection and direct address. Vulnerability, although “obscured,” challenges Le Bon’s tendencies towards irony. Written primarily on bass and composed entirely alone in an “uninterrupted vacuum,” Le Bon plays every instrument (except drums and saxophones) and recorded the album largely by herself with long-term collaborator and co-producer Samur Khouja in Cardiff, Wales. Enforced time and space pushed boundaries, leading to an even more extreme version of Le Bon’s studio process – as exits were sealed, she granted herself “permission to annihilate identity.” “Assumptions were destroyed, and nothing was rejected” as her punk assessments of existence emerged.

Enter Le Bon’s signature aesthetic paradox: songs built for Now miraculously germinate from her interests in antiquity, philosophy, architecture, and divinity’s modalities. Unhinged opulence rests in sonic deconstruction that finds coherence in pop structures, and her narrativity favors slippage away from meaning. In “Remembering Me,” she sings: In the classical rewrite / I wore the heat like / A hundred birthday cakes / Under one sun. Reconstituted meltdowns, eloquently expressed. This mirrors what she says about the creative process: “as a changeable element, it’s sometimes the only point of control… a circuit breaker.” She’s for sure enlightened, or at least more highly evolved than the rest of us. Hear the last stanza on the album closer, “Wheel”: I do not think that you love yourself / I’d take you back to school / And teach you right / How to want a life / But, it takes more time than you’d tender. Reprimanding herself or a loved one, no matter: it’s an end note about learning how to love, which takes a lifetime and is more urgent than ever.

To leverage visionary control, Le Bon invented twisted types of discipline into her absurdist decision making. Primary goals in this project were to mimic the “religious” sensibility in one of Tim Presley’s paintings, which hung on the studio wall as a meditative image and was reproduced as a portrait of Le Bon for Pompeii‘s cover. Fist across the heart, stalwart and saintly: how to make “music that sounds like a painting?” Cate asked herself. Enter piles of Pompeii‘s signature synths made on favourites such as the Yamaha DX7, amongst others; basslines inspired by 1980s Japanese city pop, designed to bring joyfulness and abandonment; vocal arrangements that add memorable depth to the melodic fabric of each song; long-term collaborator Stella Mozgawa’s “jazz-thinking” percussion patched in from quarantined Australia; and Khouja’s encouraging presence.

The songs of Pompeii feel suspended in time, both of the moment and instant but reactionary and Dada-esque in their insistence to be playful, satirical, and surreal. From the spirited, strutting bass fretwork of “Moderation”, to the sax-swagger of “Running Away”; a tale exquisite in nature but ultimately doomed (The fountain that empties the world / Too beautiful to hold), escapism lives as a foil to the outside world. Pompeii‘s audacious tribute to memory, compassion, and mortal salience is here to stay.

The past few years have seen Le Bon emerge as a much lauded and sought-after collaborator,  producing albums for contemporaries such as Deerhunter (Why Hasn’t Everything Already Disappeared?), John Grant (Boy From Michigan), and forthcoming albums from both Devendra Banhart and H. Hawkline. She’s not so much a gun for hire as a multi-faceted artist and producer who can both steer the ship and tap into a collective mindset; in 2019, she joined John Cale for a three-night live stretch in Paris, and 2021 will see a bass appearance on the track “If I Don’t Hear from You Tonight” from Courtney Barnett’s Things Take Time, Take Time. As Bradford Cox aptly notes about Le Bon, “there are artists who look inwards or outwards, and then there are the very rare ones who transcend either location.”