I POURED THE TEA by Fair Dinkum Theatre 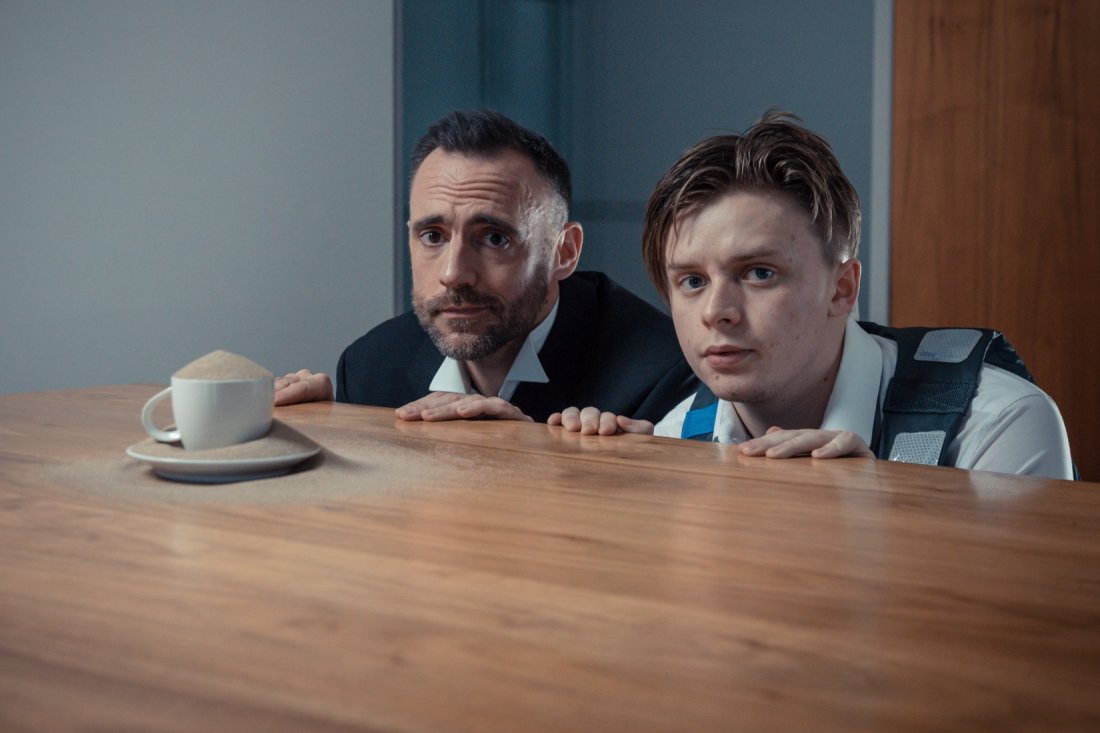 The Northsiders at the heart of the banking crisis……

Fair Dinkum Theatre presents the world premiere of I POURED THE TEA a comedic look at the Irish banking crisis written by award-winning Australian playwright Nicholas Makin. The play makes its full stage debut after a successful ‘original read’ to a public audience at the NEWvember 2019 Festival. The play will stage for an 11 day run at The Boys School at Smock Alley from July 4th to July 16th.

€16150 per man woman and child to bail out the banks.  What did we do?  Could it get any more absurd than that?  Apparently yes!  This new absurdist play will look at the complexity of being a true Northsider when there are major social and economic factors at work during the Irish Banking Crisis.

Join Seamus and Boxer - employees of the catering company present at every significant event of the crisis - on their paid-for holiday in the tropics … until their island starts to feel a bit deserted and rather dangerous. Meanwhile over in the Chairman’s office of an investment bank Fitzsimons is feeling the heat and seeking to pass the buck in this fast-moving comedy of the blame game and financial collapse.

With an existentially Irish humour I POURED THE TEA focuses on the camaraderie relationships resilience and depth of friendship of ordinary people as they struggle to survive extraordinary events not of their making.  At times dark always funny but ultimately optimistic.  True friendship will win through – no matter the odds!

Directed by Casey Hallahan  and with a cast of 5 stellar performers including Jason Gilroy  known for his film and TV credits including: Fair City Easy way out (short) Randomer (feature) The crooked path (short) Best (feature) The Ambassador (TV series) Ballykissangel (TV series) Trojan Eddie (feature) and What lies behind the mask (short).  Matthew O’Donnell is a young actor from County Sligo.  O'Donnell is a graduate from both the Lir Academy (2017) and Bow Street (2019). Some of his previous roles include Claudio (Much Ado About Nothing) Ernst (Cabaret) and a supporting role in RTE Drama Dead Still (2019).  Conor Duffy is a Dublin based actor and writer represented by Frasers. He has appeared in Scene +Heard and the Galway Fringe. He is also training to be a stuntman and has completed his first full body burn this year.  Rory Knox is a Writer/Performer/Director/Producer/Designer which ranks only slightly below his childhood ambition of Cowboy/Samurai/Archaeologist. He hails from North County Dublin and obtained a BA in Theatre Studies from Queens University Belfast. Gerry Cannon Gerry Cannon was born in Dublin.  His primary focus has been on screen acting and filmmaking.  The highlight of 2021 for Gerry was winning the Best Actor Award at the Dublin International Short Film and Music Festival for his role in the short film Acheron.  Gerry makes a point of doing one stage show a year.

“I liked the positivity in the simple things. It felt real for the north-siders.”

Fair Dinkum Theatre! is a young company made up of experienced theatrically trained professionals with international experience. At Fair Dinkum we believe that theatre should have an honesty about it – good fun good value and thought provoking! It’s a philosophy that Australian audiences came to love and one we are excited to introduce to Ireland!

What motivates us as a young company are new works that amuse startle and amaze. We want you to leave the theatre feeling that you have been entertained and challenged. We hope that our energy and commitment to presenting the very best theatre will bring you back!

We believe in seeking stories and themes which resonate with local audiences – be they Australian or Irish – and yet have a universal message. In this way we hope eventually to connect with audiences around the world.

Nick is an award-winning Australian playwright who now calls Ireland home.  Nick’s works are particularly noted for their unique quirky brand of absurdist humour.  In his early twenties Nick won competitions at a national state and regional level.  The reality of earning a living career and family forced Nick into relative silence for 30 years.  Now with time again on his side  Nick is writing prodigiously!  I Poured the Tea is Nick’s first piece of this new era and was extremely well received at AboutFace’s 2019 NEWvember new plays festival.

Casey Hallahan is a freelance drama facilitator director and theatremaker. They have more than a decade of training and experience and have worked with actors of all ages in Ireland France Belgium and the Czech Republic. They studied with TU Dublin (Drama) NUI Maynooth (Directing for Theatre) and Youth Theatre Ireland (ArtsTrain Drama Facilitation). From 2018 until 2020 they were part of Prague Youth Theatre’s core drama teaching team for which they directed or co-directed 11 shows. This included Inheritance a devised show that premiered in the Prague Fringe Festival in 2019.