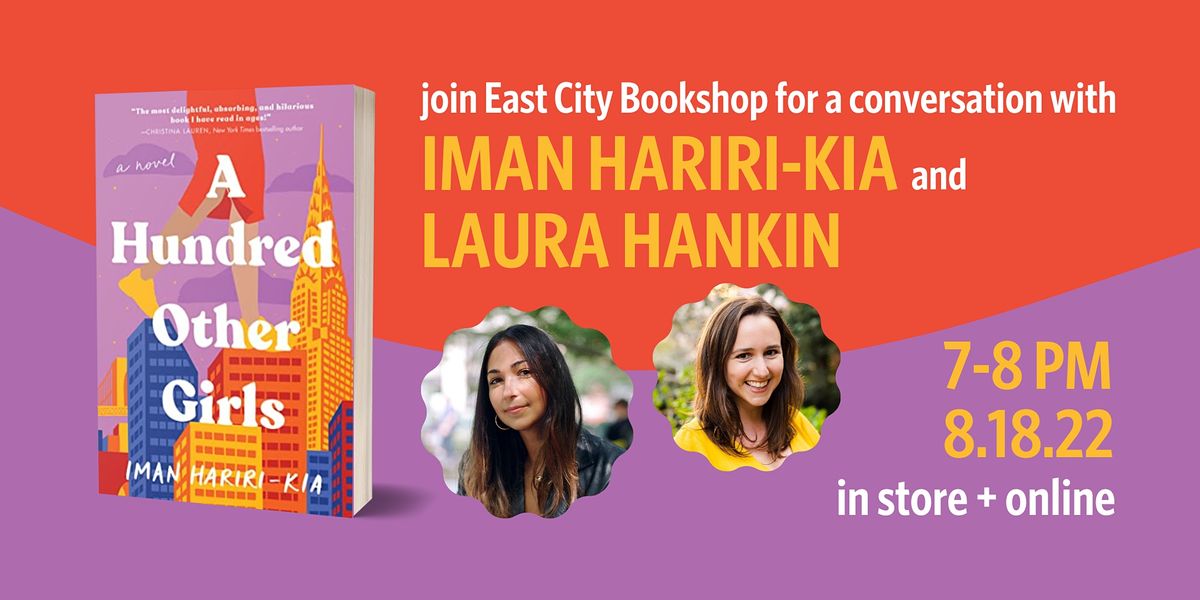 East City Bookshop welcomes Iman Hariri-Kia with her debut novel, A Hundred Other Girls, in conversation with author Laura Hankin.
About this Event

East City Bookshop welcomes nationally-acclaimed journalist, writer, and editor Iman Hariri-Kia for a conversation and Q&A about her debut novel, A Hundred Other Girls. Iman will be in conversation with Laura Hankin, author of A Special Place for Women.

Note on Format: This hybrid event will have both an in-person component with limited seating as well as a virtual broadcast via Zoom Webinar. Both in-person and virtual attendees will be able to pose questions to the authors during audience Q&A.

ABOUT A HUNDRED OTHER GIRLS

For fans of The Devil Wears Prada and The Bold Type comes a smart, modern story about the shifting media landscape and one Middle Eastern–American writer finding her place in it.

How far would you go to keep the job a hundred other girls are ready to take?

Noora's life is a little off track. She's an aspiring writer and amateur blogger in New York―which is a nice way of saying that she tutors rich Upper East Side kids and is currently crashing on her sister's couch. But that's okay. Noora has Leila, who has always been her rock, and now she has another major influence to lean on: Vinyl magazine. The pages of Vinyl practically raised Noora, teaching her everything from how to properly insert a tampon to which political ideology she subscribes to,

So when she lands a highly coveted job as assistant to Loretta James, Vinyl's iconic editor-in-chief, Noora can't believe her luck. Her only dream is to write for Vinyl, and now with her foot firmly in the door and the Loretta James as her mentor, Noora is finally on the right path... or so she thinks.

Loretta is an unhinged nightmare, insecure and desperate to remain relevant in an evolving media landscape she doesn't understand. Noora's phone buzzes constantly with Loretta's bizarre demands, particularly with tasks Loretta hopes will undermine the success of Vinyl's wunderkind digital director Jade Aki. The reality of Noora's job is nothing like she expected, and a misguided crush on the hot IT guy only threatens to complicate things even more. But as Loretta and the old-school print team enter into a turf war with Jade and the woke-for-the-wrong-reasons digital team, Noora soon finds herself caught in the middle. And with her dream job on the line, she'll need to either choose a side or form her own.

Clever, incisive, and thoroughly fun, A Hundred Other Girls is an insider's take on the changing media industry, an ode to sisterhood, and a profound exploration of what it means to chase your dreams.

IMAN HARIRI-KIA is a writer and editor born and based in New York City. A nationally acclaimed journalist, she covers sex, relationships, identity, and adolescence. You can often find her writing about her personal life on the internet, much to her parents’ dismay.

LAURA HANKIN is the author of Happy & You Know It; A Special Place for Women, which she is adapting for TV; and the upcoming The Daydreams. Her musical comedy has been featured in publications like The New York Times and The Washington Post. She lives in Washington DC, where she once fell off a treadmill twice in one day.

COVID-19 Information: Please note that East City Bookshop continuously monitors public health guidance to ensure the safety of customers, authors, and our staff and reserves the right to adjust in-person events. Masks and proof of vaccination are required for all in-person attendees.

Accessibility Information: The space currently occupied by our bookstore is unfortunately accessible only via stairs. Click here for more information on accessibility at East City Bookshop, including sign language interpretation needs.