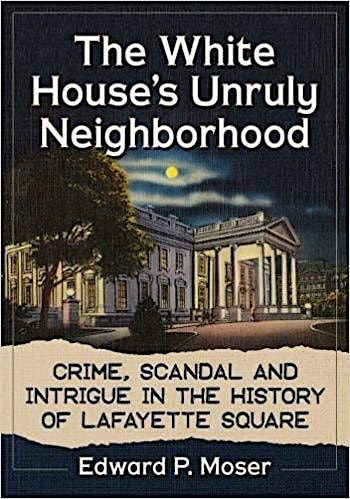 A very scary look at Lafayette Square and the White House areas!

This thrilling, and terrifying, excursion will include:

• The slain sisters who inhabit a nearby mansion!

• The path where an assassin stalked a President.

• Attempts to reach the spirit world from the Executive Mansion!

• The kindly ghost of a famous hotel!

• A “spirit photographer” who took pictures of the undead!

• Trick or treat from Confederate bankers and Yankee belles

• The M**der of a famed District Attorney

• Is it really the White House?

• The ghost of the gallows

Meet at the General Jackson statue in the middle of the Square.

About 2 hours in length.

Your guide is a former writer for the “Tonight Show”, and ex-White House speechwriter, and author of the new book, The Lost History of the Capitol: The Hidden and Tumultuous Saga of Congress and the Capitol Building:

Prepare to be scared, very scared—and informed and entertained!

Plenty of Spirits afterwards can be had nearby at the Old Ebbitt Grill, The Hamilton, or the Willard Hotel.