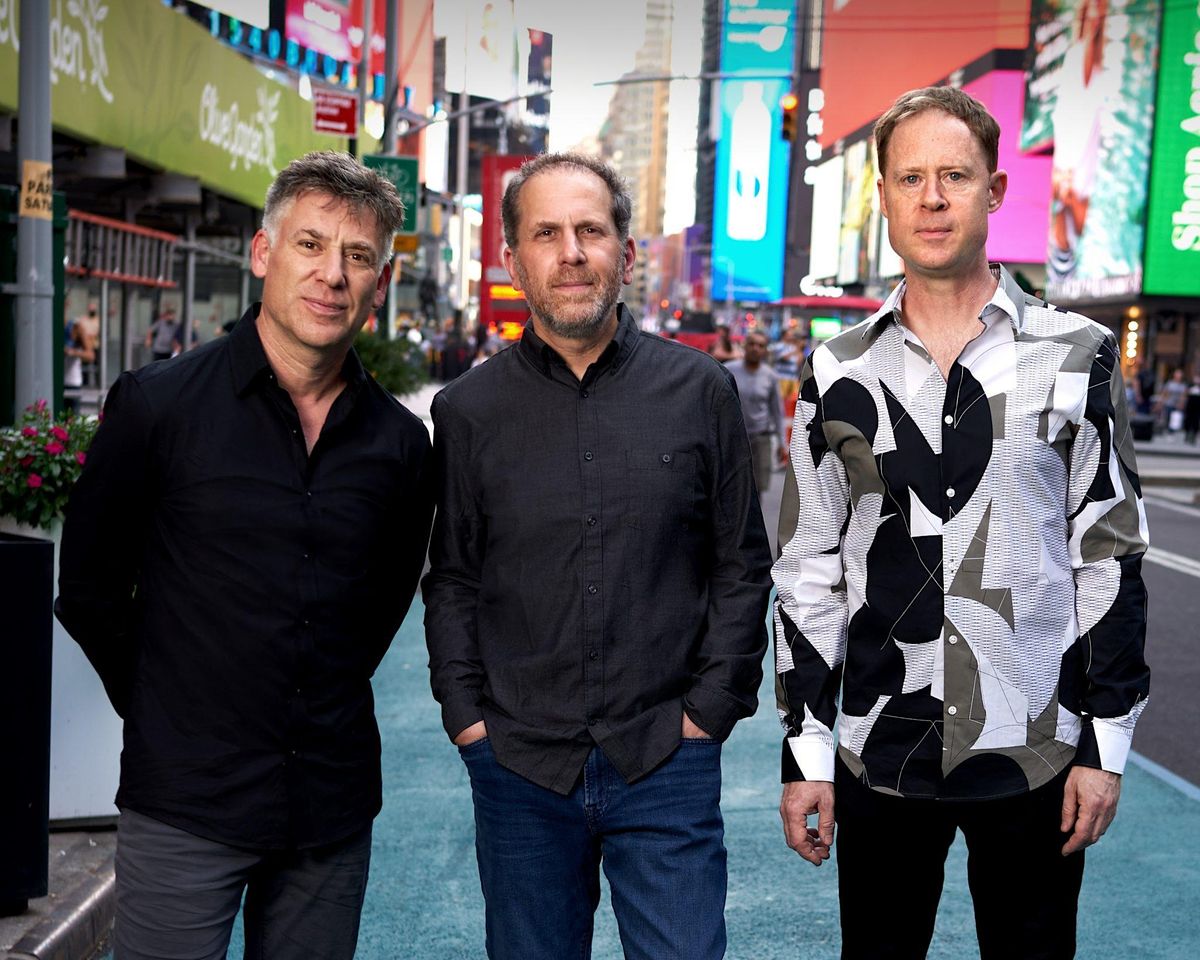 In the mid 1990s, The New York Times described Larry Goldings, Peter Bernstein, and Bill Stewart as “the best organ trio of the last decade.” The trio, which has now been together for over 30 years, has been recognized for charting new ground, with its synergistic playing, and thoughtful music. They have over a dozen recordings, all of which display their distinctive sound, whether exploring the depths of jazz standards, or playing their own original compositions.

With his signature Hammond organ style and versatility on many keyboards, Boston native Larry Goldings (b. 1968) has traversed not only the wide spectrum of jazz where he is perhaps best known, but also the worlds of funk, pop, and electronic music. High in demand as a sideman, Goldings’ sound can be heard on scores of albums by artists in a variety of musical genres.

Jazz guitarist Peter Bernstein (b. 1967, New York City) has been a part of the jazz scene in New York and abroad since 1989. During that time he has participated in over 200 recordings and numerous festival, concert and club performances with musicians from all generations. As a leader, Peter has released 12 albums and a DVD, Live at Smoke.

He got his first break while attending the New School when he met the legendary guitarist Jim Hall. Hall asked Peter to participate in his Invitational Concert as part of the 1990 JVC Jazz Festival. The event featured such guitarists as John Scofield and Pat Metheny and was released as “Live at Town Hall Vol. 2” by Music Masters. Hall noted that Peter “…has paid attention to the past as well as the future. He is the most impressive guitarist I’ve heard. He plays the best of them all for swing, logic, feel and taste.” Also in 1990, Peter Bernstein was discovered by alto saxophonist Lou Donaldson and took part in the first of four recordings with him. He was a regular member of his group throughout the 1990s. “Some people just have it.” Donaldson said. “…most of the time you have to teach someone what to do, but Peter knows it all.” Peter has also enjoyed long musical associations with legendary drummer Jimmy Cobb (Cobb’s Mob), as well as organist Larry Goldings and drummer Bill Stewart as a member of their highly acclaimed trio. The New York Times called them “the best organ trio of the last decade”. Together they recorded a dozen of records, all of which display their distinctive sound, whether exploring the depths of jazz standards or playing their original compositions. From 1995 through 1997, Peter was a member of Joshua Redman’s band and played on Redman’s Freedom in the Groove CD. He played with Diana Krall’s quartet from 1999 through 2001 and with Dr. Lonnie Smith, the legendary organist who made his debut on the George Benson Cookbook albums. He has also recorded five CDs with organist Melvin Rhyne, known for his association with Wes Montgomery. In addition, Peter has appeared in groups led by Sonny Rollins, Bobby Hutcherson, George Coleman, David Fathead Newman, Etta Jones and Nicholas Payton.

Current Projects include a solo record, “Solo Guitar – Live at Smalls” in 2013, the albums “Let Loose” w/ Gerald Clayton, Doug Weiss, and Bill Stewart in 2016 and “Signs LIVE!”, featuring pianist Brad Mehldau, bassist Christian McBride and drummer Gregory Hutchinson, in 2017, both released on Smoke Session Records as well as the highly acclaimed organ trio with organist Larry Goldings and drummer Bill Stewart with whom he has released numerous albums and toured world wide for almost 30 years. The most recent releases are “Ramshackle Serenade” (2014) and “Toy Tunes” (2018), both on Pirouet records.

Originally from Des Moines, Iowa, drummer/composer Bill Stewart (b. 1966) made his name as the rhythmic force behind guitarist John Scofield since 1990 and still collaborating with him regularly since 1990. He is now one of the most sought after jazz drummers in the world.

Stewart’s playing is distinguished by its melodic focus, and its polyrhythmic, or layered, character. Although his drumming bears the influence of various melodic and swinging drummers who preceded him, Stewart’s voice is clearly his own, and has influenced a younger generation of drummers.

An excellent composer in his own right, Stewart has made several records as a leader that predominantly feature his own music, bearing the same thoughtfulness, humor, and impeccable taste that one hears in his playing. He has recorded 6 cds as a leader. Stewart’s Blue Note recording “Snide Remarks” was selected as one of the top 10 cds of 1997 by The New York Times, and his latest is Band Menu (2018, self released on cdbabyitunes/amazon), a trio with Walter Smith III and Larry Grenadier.