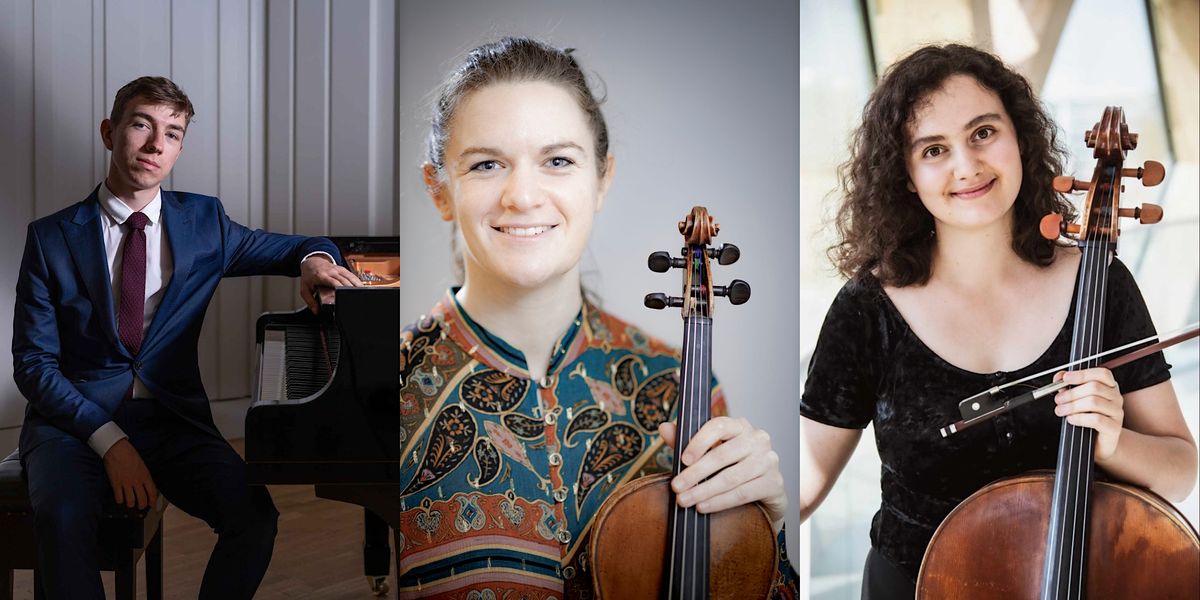 We a delighted to present an evening of chamber music from three talented musicians who will be going on to perform the same programme at Rhyll Music Club and St Mary's Perivale. This talented trio met during their studies at the Mozarteum University in Salzburg, Austria.

A finalist of The 18th International Robert Schumann Competition Zwickau, and described as ‘’ A born Schumann player’’ with a ‘’magical sense of colour and extraordinary technical prowess’’ (July 2019, London recital), Callum Mclachlan, 22, was born into a family of musicians and first started piano lessons with his father at the age of 7, and entered Chetham’s School of Music at age 11, where he studied with Russian pianist and pedagogue Dina Parakhina. He was awarded the highest diploma from Trinity College – the FTCL, in his final year. He currently studies at the Universität Mozarteum in Salzburg since 2018, with the celebrated pianist Claudius Tanski. Next season in 2022 he will debut at the Wien Konzerthaus with cellist Jeremias Fliedl

In 2021, he was a Hattori Foundation 2021 Senior Finalist and receives generous support. He has performed at many prestigious concert venues throughout the UK, Europe, and USA, including performing Beethoven’s 3rd Piano Concerto at the Edinburgh Fringe Festival, works of Benjamin Britten in Steinway Hall London, Liszt’s 2nd Piano Concerto with Paul Mann and CSO at RNCM Concert Hall, which he recently repeated at the Turner Sims Concert Hall in Southampton in March 2020 and Mozart Sonatas for Piano and Violin at The Bridgewater Hall. He receives repeat re-engagements at these leading venues and festivals across the UK. In 2019, he made his New York recital debut, performing works of Beethoven, Brahms and Percy Grainger, a recital programme he performed at the newly opened Stoller Hall in Manchester, to critical acclaim. He was recently personally invited by Pascal Nemirowski to perform in the Young Artist Series in the RBC Birmingham Piano Festival. He has played in numerous masterclasses with Stephen Kovacevich, Jacques Rouvier, Christopher Elton, Grigory Gruzmann, Markus Groh, Dmitri Alexeev, Andrei Gavrilov, Stephen Hough, and Boris Berman. Most recently, he made a recording of Beethoven’s Pathetique Sonata at the Universitat Mozarteum Salzburg, in collaboration with G. Henle Verlag for Beethoven 250. Recent highlights of the past season include performing Beethoven’s Emperor Concerto with the Sheffield Chamber Orchestra, numerous solo recitals in London, Vienna and Manchester, and Mozart’s ‘Jeunehomme’ Concerto arranged for Piano and String Quartet with students from the Royal College of Music in London.