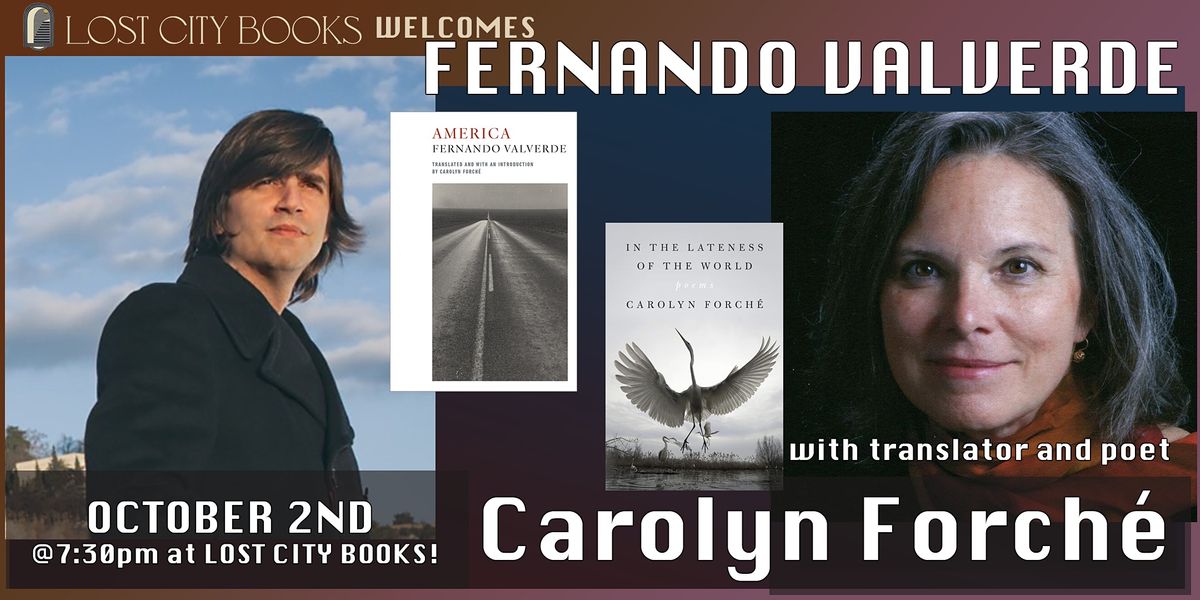 Join us in welcoming Fernando Valverde, author of America, and Carolyn Forché, author of In the Lateness of the World
About this Event

Join us in welcoming Fernando Valverde, author of , and Carolyn Forché, author of !

Fernando Valverde has been voted the most relevant Spanish-language poet born since 1970 by nearly two hundred critics and researchers from more than one hundred international universities (Harvard, Oxford, Columbia, Princeton, Bologna, Salamanca and the Sorbonne). His books have been published in different countries in Europe and America and translated into several languages. He has received some of the most significant awards for poetry in Spanish, among them the Federico García Lorca, the Emilio Alarcos del Principado de Asturias, and the Antonio Machado. His last book, The Insistence of Harm, has been the most-sold book of poetry in Spain and has received the Book of the Year award from the Latino American Writers Institute of the City University of New York. In 2014, he was nominated for a Latin Grammy for his collaboration in a work of fusion between poetry and flamenco. For ten years, he has worked as a journalist for the Spanish newspaper El País. He directs the International Festival of Poetry in Granada—one of the most important literary events in Europe—that has featured more than 300 authors, including several Nobel Prize laureates.

Born in Detroit, Michigan in 1950, poet, teacher and activist Carolyn Forché has witnessed, thought about, and put into poetry some of the most devastating events of twentieth-century world history. According to Joyce Carol Oates in the New York Times Book Review, Forché’s ability to wed the “political” with the “personal” places her in the company of such poets as Pablo Neruda, Philip Levine, and Denise Levertov.

In Fernando Valverde’s América, “sorrow is ancient.” Mournfully lyrical, politically sharp, with a sweeping view of American roots, dysfunctions, and ideals―as if from above, and yet also from within―this is a book that deconstructs the legacy of empire. From the Mississippi River to Fulton Avenue, from slavery to “lone wolf” shooters, Valverde grieves but does not wince away from all that is lost to greed and a culture of violence, painting an urgent portrait of “the thirst of America / a smile satisfied to death.” Valverde is widely regarded as one of the most important younger Spanish-language poets. Here his vibrant voice and convictions are translated and introduced by Carolyn Forché, herself a world-renowned poet of witness. Bilingual, with Spanish originals and English translations.

(2021 Pulitzer Prize Finalist!) Over four decades, Carolyn Forché's visionary work has reinvigorated poetry's power to awaken the reader. Her groundbreaking poems have been testimonies, inquiries, and wonderments. They daringly map a territory where poetry asserts our inexhaustible responsibility to each other.

Her first new collection in seventeen years, In the Lateness of the World is a tenebrous book of crossings, of migrations across oceans and borders but also between the present and the past, life and death. The poems call to the reader from the end of the world where they are sifting through the aftermath of history. Forché envisions a place where "you could see everything at once ... every moment you have lived or place you have been." The world here seems to be steadily vanishing, but in the moments before the uncertain end, an illumination arrives and "there is nothing that cannot be seen." In the Lateness of the World is a revelation from one of the finest poets writing today.

This event will be hosted in-person at Lost City Books! Masks will be required of attendees.

and will be available at Lost City Books! 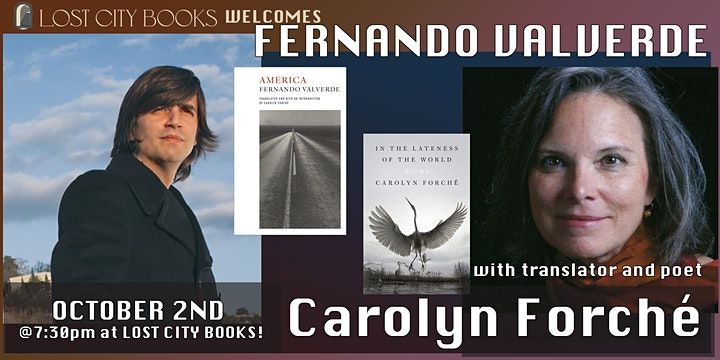