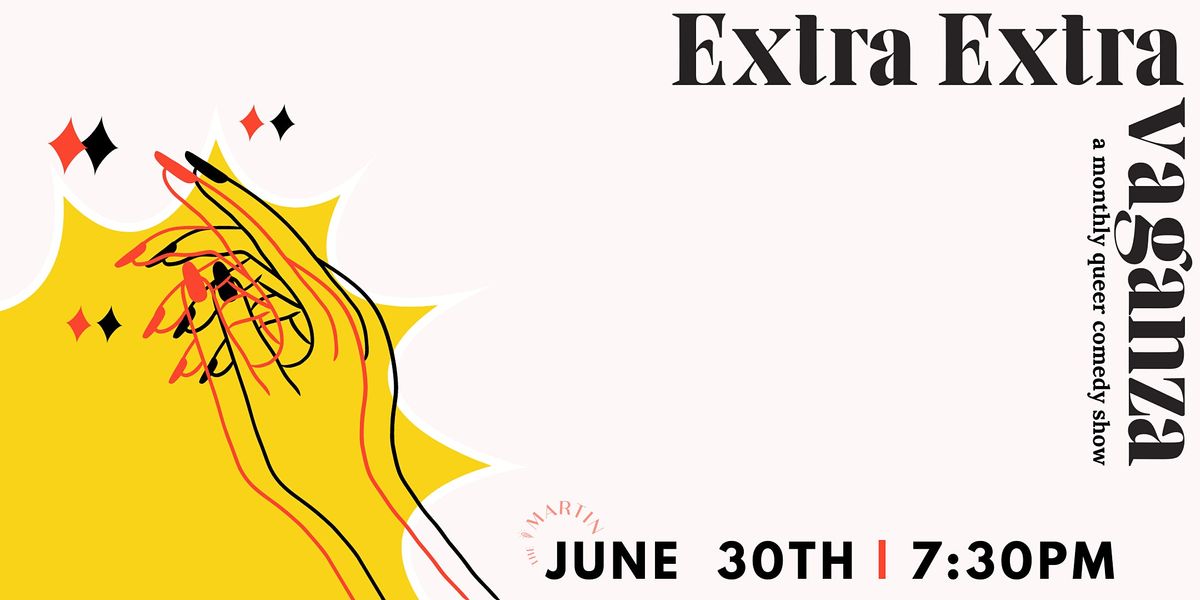 Advertisement
Our monthly comedy show hosted & curated by KJ Whitehead returns with a new lineup of comedic performers.
About this Event

The Martin is back with our monthly queer comedy show: EXTRA EXTRAVAGANZA - hosted & curated by KJ Whitehead! Each month we'll bring you an array of comedy-based performers to the space for a great night of laughs.

Tickets are $5 before doors and $6 night-of. Proceeds are split between our space, host and performers each month.

A card-only bar will be available for purchase. All guests must bring proof of vaccination and provide a physical ID at the door.

Want to dine next door at Split-Rail before the show? We recommend making a reservation.

From Chicago, Kujichagulia Juniper Whitehead (she/her) is the self-proclaimed Queen of Radical Comedy and has proven to be so with a career spanning over 8 years. Through her work, she shares her comedic criticism of social relations, politics, trans life and how to burn the U.S. flag and use the ash as eyeshadow. Festival credits include: Sixth Comedy Festival (Cleveland, OH), NW Black Comedy Festival (Portland, OR), Charm City Comedy Festival (Baltimore, MD), International Lady Laughs Comedy Festival (Madison, WI) and many more! Even as the representation she wants to see in entertainment, K.J. still continues to find her path in comedy. She invites you to grow and learn as much as you laugh with her. @iamkjwhitehead

Lizzie Kaniecki (she/her) is a Chicago-based standup, improv, and musical comedian. Her favorite movie is Fly Away Home and you should watch it. @lizziekaniecki

Shawn Banks (he/him & they/them) is a loud and proud queer comedian originally from the Washington DC area but now has lived in the Windy City for the past 2 years. Shawn has performed at Venues such as the laugh factory, Zanies, the John F. Kennedy Center, and so much more. Shawn describes his comedy style as equal parts sassy and stupid. On top of being a comic, he also co hosts a hilarious podcast with his queer bestie called “-Ish Please” on Spotify and Apple Podcasts. @Bankzzyyy

Simon Collier (he/him) is a Chicago based comedian and improviser who loves animals, puns, and paints hurts on things. He performs with the CSz Theater Chicago and has performed with ImprovAcadia and many more. @lolsimoncollier

The Martin is an artist-first community space since 2018. Founded & Curated by Whitney LaMora (@whitneycurates), The Martin is a queer-driven gallery located in the West Town neighborhood of Chicago. Learn more about the current exhibitions, how to host your own event at the space and more at themartinchicago.com or by following @themartinchicago.