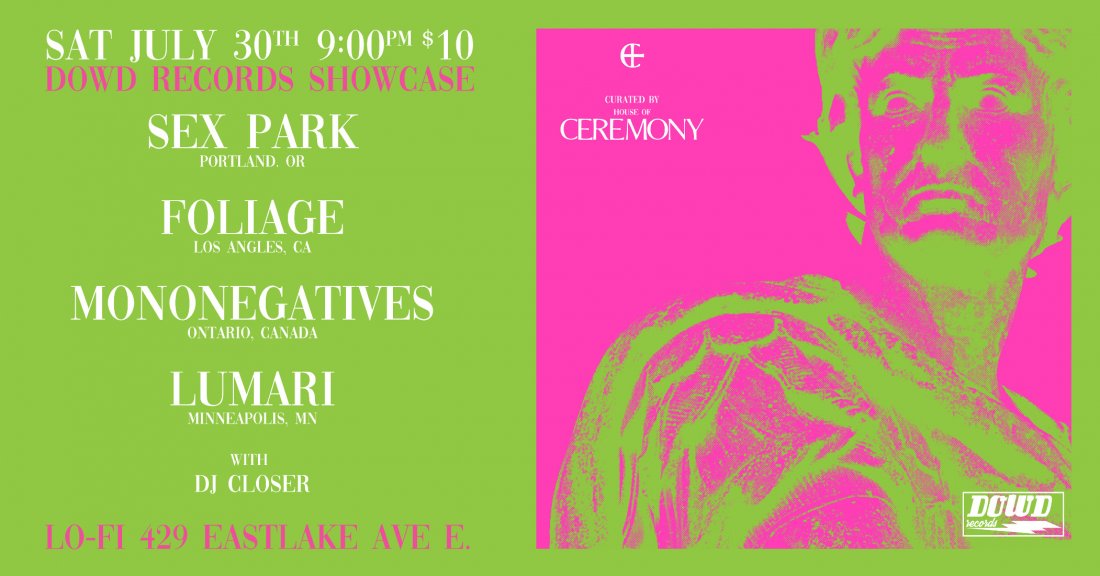 Come join us at The Lo-Fi Performance for an evening show featuring four incredible bands from the Dowd Records roster - Sex Park Foliage Mononegatives and Lumari. Three new singles are dropping for the showcase and the event will offer exclusive vinyl skateboard decks guitar effects pedals t-shirts and more. The events are curated by Adored Skateboards and the premier rock n’ roll promotions team at House of Ceremony. DJ Closer will be setting the mood for the evening.

FOLIAGE (Los Angeles Ca)For the last seven years Manuel Joseph Walker was one of indie music’s best kept secrets. A teenage production prodigy obsessed with jangle pop and hip-hop his early releases catapulted him from a local DIY mainstay to favorite among bloggers and fans worldwide. Five albums several tours and millions of streams later - and Foliage is carrying the torch for modern day jangle pop and indie rock. Walker’s forward progress is bigger and more confident than ever incorporating new influences ranging from Drum-N-Bass & IDM to Shoegaze & Bossa Nova and writing his most personal lyrics to date.

MONONEGATIVES (Ontario Canada)All the way from London Ontario - Mononegatives are playing their first West Coast show at the Dowd Records showcase. Mononegatives just put out their debut LP in 2021 to rave reviews and their approach to dystopian post-punk synth rock is highly original and an absolute blast. Mononegatives are currently featured in The Big Takeover magazine and their review in Faster and Louder sums them up perfectly - Call it synth-punk electro-punk post-punk punk/new wave or whatever you like. Just know that MONONEGATIVES do it better than almost any band out there. -Faster and Louder. You need to check them out.

LUMARI (Minneapolis MN) Lumari is an American dreampop/shoegaze band based in Minneapolis MN. Boasting shimmering guitar textures to beautifully soaring vocals they’re determined to carve out their own path blurring the lines between multiple genres. Even before performing their first show Lumari is breaking through the noise with an urgency that has already caught the attention of record labels from three continents.https://dowdrecords.com/lumari

$10 admission at the door