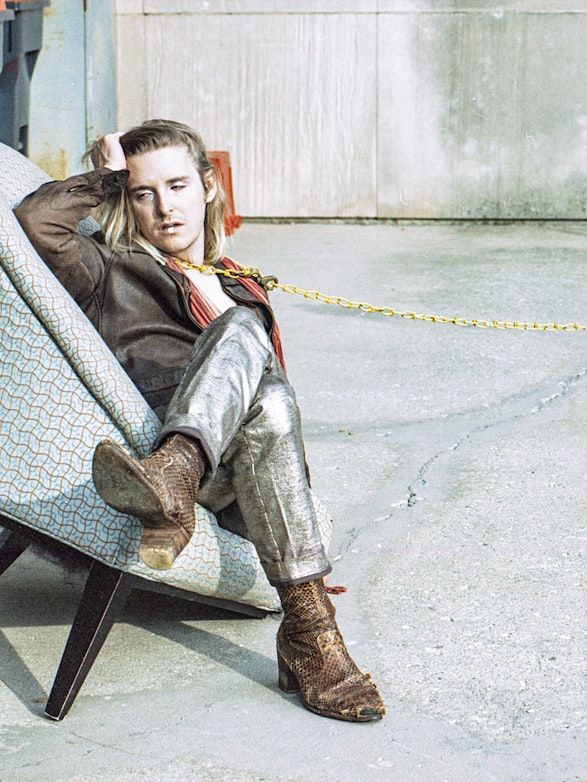 Diane Coffee with Why Bonnie at Johnny Brenda's
About this Event

The ever-evolving spectacle that is Diane Coffee — the gender and genre-bending alter ego of Shaun Fleming — returns with Internet Arms, a swan dive into a lush, digital glam wonderland.

Fleming’s path to stardom can be traced all the way back to his childhood days as a Disney voice actor, but for the past six years he’s explored the depths of his identity and channeled it outward in the form of the enigmatic and exuberant Diane Coffee.

In 2018, after performing as King Herod in the Lyric Opera’s critically-acclaimed run of Jesus Christ Superstar, Fleming emerged from the recording studio with Internet Arms. Born from the fear and uncertainty of a future in which humankind is both dependent on and poisoned by technology, the album finds Diane Coffee trapped in a digital world, enslaved by AI.

“Did you know the technology exists to take a photo of anyone you know and use it to create… well, let’s call it, ‘adult entertainment’?” Fleming asks. “And did you know that an estimated 70% of all online activity isn’t human? Where does that leave us? We don’t interact with each other anymore because we’re always online. Not to mention we can manifest any version of ourselves at the push of a button when we’re logged in, so when we encounter humans they’re not even real.”

Facing this existential crisis, Fleming’s anxieties became his muse as his writing explored the scenarios of this dystopian future: “It’s a personal study on how I feel about living with constant blurred lines of the self and the projected self.” This notion shaped the sound of Internet Arms as well, compelling Fleming to gravitate toward synths, electronic drums, and other futuristic sounds from the past and present to create his version of a digital landscape, as well as a digital version of himself.

“The songs are what have always dictated the sound. Working in the realm of clean, modern pop production has been an exhilarating change of pace. Diane Coffee now sounds like a digitization of its former self because I also feel trapped in this digital world,” Fleming explains.

This newly cybernated Diane Coffee is masterfully unveiled on album standouts “Not Ready to Go” and “Like a Child Does,” with both songs serving as vulnerable reflections on power and abuse. But whereas the former positions its chorus to soar high above a cityscape constructed of conduits and transistors, the driving pulse of the latter propels forward like a high-speed race through the surface streets of said city. Elsewhere, Diane Coffee’s sonic boundaries are pushed the furthest on “Lights Off,” a massive contemporary pop song that impressively showcases Fleming’s extraordinary vocal range.

As a whole, Internet Arms marks a significant new phase for Fleming, a testimony to the idea that Diane Coffee will endure as a fluid form of expression that continues to defy expectations of sound and genre.

In a decisive step to start performing her backlogged material, Howerton moved back home to Texas after graduating college in 2015. In Austin, Howerton joined lifelong best friend Kendall Powell, who she met in preschool. Powell’s classical piano chops swapped to synth for the new project. Both active in the Austin scene, guitarist Sam Houdek and bassist Chance Williams later joined to complete the lineup.

In 2018, the band emerged on petite indie outlet Sports Day Records with In Water. The EP eulogized Howerton’s older brother, who passed away years prior. Intimately bristling tracks explored the grieving process, introducing the group’s uncanny ability to stir up huge catharsis in a seamless rise. Follow-up Nightgown expanded the effort, pulling lush Mazzy Star and Cranberries influences. Embarking on their first DIY tour the same year, Why Bonnie quickly landed opening runs for the like-minded sounds of Snail Mail and Beach Fossils.

The sum of those experiences culminates in the sweeping, layered rock sound of third EP Voice Box. Fuzzed-out guitars and crystalline vocals drive a tough-edged struggle in the space between suppression and artistic liberty. Howerton explains: “It encapsulates a disconnect between my inner and outer world, and not being able to express myself authentically because of that. But, ultimately knowing I will crash and burn if I don’t.”

The intense effort isn’t always pretty. The title track fumes with quiet wisdom, urging: “I know it’s easier to bury your uncertainties in a cloud of masculinity / Guess it’s the curse you bear to talk over me.” Breeders-inspired “Athlete” endeavors self-doubt in a blistering metaphor of failed sportsmanship. Fiery “No Caves” rises to a forceful album finale, unleashing the full windswept power of Howerton’s vocals, padded by Houdek. Of the ending ascent, the lead singer decides: “It’s about the freedom of realizing that you can’t hide anymore. You have to put yourself out there.”