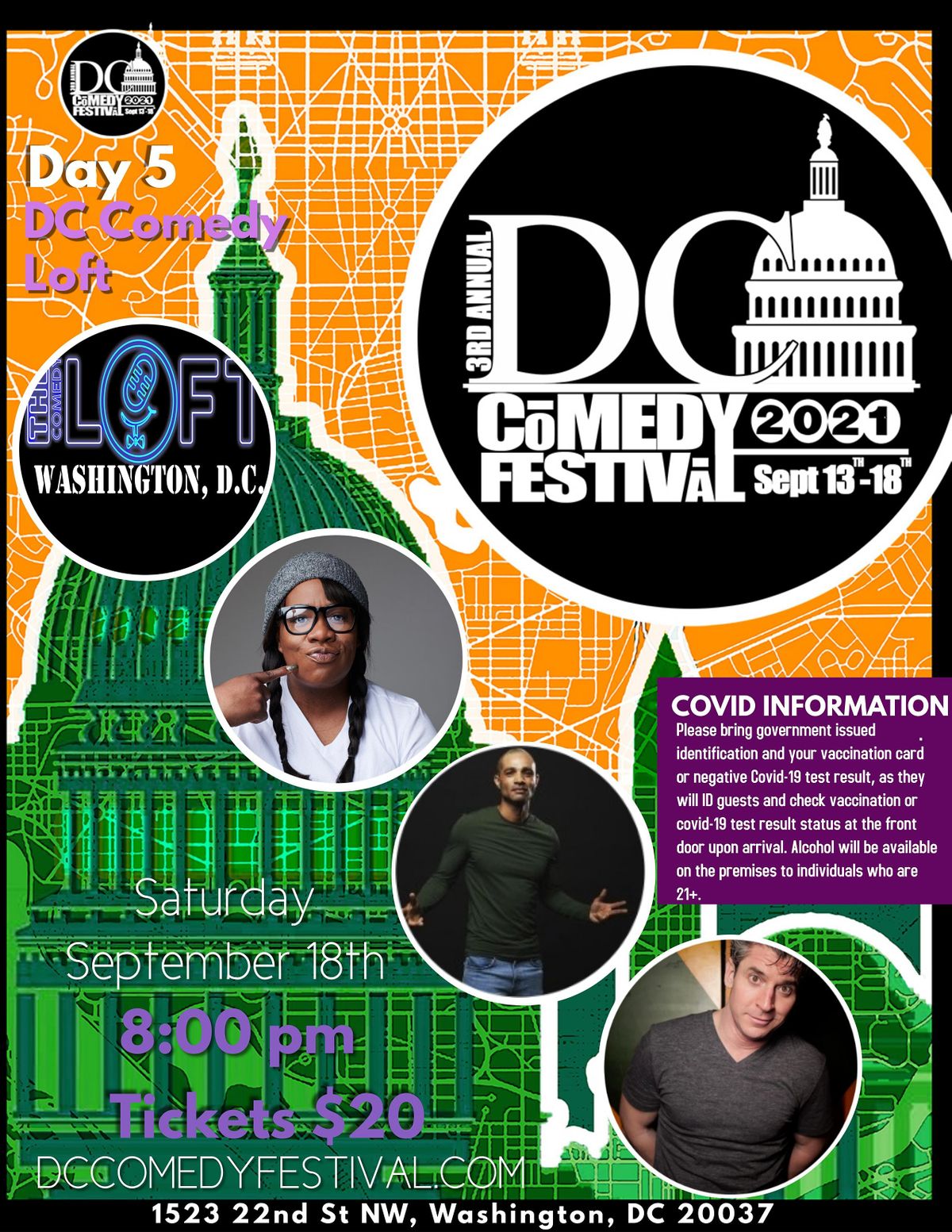 The Festival is proud to spotlight the talent that lives and thrives in the DC metro area and to pay tribute to the scene.
About this Event

This show has been moved to accommodate covid restrictions..

The 3rd Annual DC Comedy Festival is in full effect. Come join us for another great year of shows. Tonight's show will be at the DC Comedy Loft

The host of this show : Eddie Liles

Franqi French-Variety recently named Franqi French one of the 2020 - 10 Comics to watch! Make sure you check out the full feature in the September 29th issue. In 2019, NBC crowned her the winner of their National Standup Up Comedy competition and due in 2021 is her first 1 hour comedy special: M.A.D.

Out of thousands of submissions and auditions Ms. French was an undeniable stand out. Franqi’ an award-winning talent, who regularly performs coast to coast with appearances at The DC Improv, The Kennedy Center, the Hollywood Improv and the world-famous Comedy Store. Ms. French has shared the stage with Donnell Rawlings, Fortune Feimster, Todd Glass, D.L. Hughley, Nicole Byer, among other talented comedians. She has made guest appearances on WeTV, TVOne’s “The Roland Martin Show,” and she will be a featured comic on season 3 of “Laugh After Dark” on Amazon Prime. Franqi has headlined The Bentzen Ball as well as The Black Women in Comedy Festival in Brooklyn. She is currently based in Los Angeles, CA and will be a featured headliner on the Stand Up NBC Summer Tour!

The Festival is proud to spotlight the talent that lives and thrives in the DC metro area and to pay tribute to the scene that first gave laughs to Dave Chappelle, Martin Lawrence, and Wanda Sykes. The Festival takes place in several clubs and venues across the District.

The DC Comedy Festival is set to showcase a diverse line-up of comedians from across the country. From open mics to national headliners, the Festival is guaranteed to bring the talent and the laughs. It will also offer an educational workshop for comedians who will learn how to build their brand and business.

With hopes to make the DC Comedy Festival the biggest showcase on the East Coast and eventually the country, the Festival creators aim to make an event that attendees will mark their calendars for next year.

HOW DID THE IDEA FOR THIS FESTIVAL COME ABOUT?

Three comedians from the DC metro area saw the need to provide a platform for comedians of all levels, from bright-eyed newcomers to seasoned veterans, to perform and to network with other comics, bookers, and showrunners. They decided to create an event that not only highlights local talent but also gives the public a chance to become a part of a community that moves every night, bar to bar, mic to mic. With over 200 comedians coming to the event last year, this year will be one of the funniest networking comedy festivals this year.