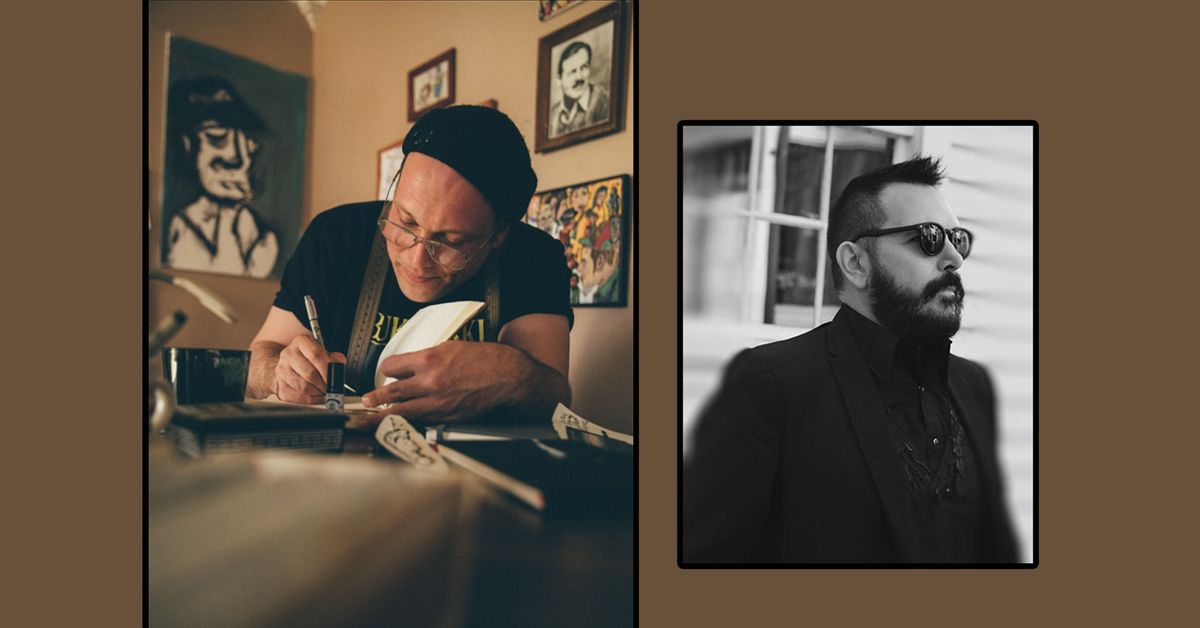 Left-of-Center Folk Singer - Songwriter and Satirist
About this Event

“East Nashville folksinger & satirist Darrin Bradbury has made a name for himself through relentless touring & writing honest, sometimes humorous songs about the stranger corners of America.” – American Songwriter Magazine

Darrin Bradbury is an American satirist and ANTI- Records’ newest signing, with songs that celebrate the humor and heartbreak of everyday American life. “I was born in Union City, New Jersey and I thought a lot about leaving as a kid,” Bradbury explained. “I think it is in the water where I’m from – the impulse to run for it. I eventually did.”

Drunken Prayer transcends the bounds of “Americana”. This is music that could emerge from a highly blissed-out biker bar or at a swampy ashram.

On the side Geer is the occasional lead guitar player for the always-weird, alt-country goths Freakwater and the wild rock and soul Brooklyn artist Bette Smith. Morgan has also been touring internationally, opening for and often joining the eccentric Handsome Family.

Today Morgan splits time between Portland, OR and Asheville, NC.

“It's Americana in the sense that America is a place of menace, hybrid vigor and unending strangeness.” ~ Robert Duncan, CREEM Magazine

"Why you gotta be so serious kid? / You are where you are and you live where you live."

This is the opening couplet of Darrin Bradbury's new album, Artvertisement, but it also encapsulates the ethos of much of Bradbury's work as a songwriter. Since releasing his debut album Elmwood Park: A Slightly Melodic Audiobook in 2016, Bradbury has documented the warts-and-all minutiae of everyday life with sharp wit and a big heart, doing so with a healthy dose of humor and a refreshing lack of self-seriousness.

Artvertisement is Bradbury's third album and second release for ANTI-, following his critically acclaimed 2019 LP Talking Dogs & Atom Bombs. Bradbury wrote Artvertisement while touring in support of Talking Dogs, and recorded the album at Trace Horse Studio in March of 2020 over the strange, anxious handful of days between Nashville's devastating March 3rd tornado and the start of the COVID-19 shutdown.

The title Artvertisement was inspired by Bradbury's difficult experiences navigating the polished, often soulless Nashville music industry, where record label executives would laud his songwriting — some going so far as to call him a genius — but ultimately turn him away because his music wasn't commercial.

"This guy took me up into this office once, high up in this building," he says of one meeting. "He looked out of his window over the city and he turned to me after a long, introspective moment, looking upon the city he now owned, and he was like, 'So your whole thing is about being a big loser, right?' To cop to this, at the time I was pretty green, so I was like, ‘Uh, yeah, I guess so?'"

The title track, which recalls early Hold Steady with its raucous guitars and Bradbury's freewheeling, almost conversational delivery, distills this experience into one frantic, infectiously catchy minute, translating that particularly painful meeting into a blistering takedown of the commodification of art. "Artvertisement!" Bradbury sings, nearly yelling. "We put your brand and their brand together."

That concept recurs across Artvertisement, which tackles the big questions — like why we're here, and how we can live principled lives in a capitalist hellscape — with vulnerability, heart and plenty of pop culture references. "Exile on Myrtle Beach," with its sing-along chorus and live show-ready arrangement, follows the imaginary exploits of some of Bradbury's favorite humorists, like Andy Kaufman and Richard Pryor. "Pizza and Drugs" is the LP's longest song and its most sonically traditional, with Bradbury daydreaming of reuniting with an ex-love over plaintive piano and a minimalist beat. And "Busted World" uses a folk-song scaffolding to build something of a doomsday pop song, with Bradbury declaring, "The whole thing is a joke and the joke's on you."

Sonically, Artvertisement draws more heavily from Bradbury's earliest influences — notably, early 2000s Saddle Creek artists, DIY punk and the Hold Steady's Craig Finn — than did his earlier work. You can hear those influences all over the album, like on the power-pop ode to Bradbury's sister, "Deanna, Deanna," and the gritty folk of "XXYTOPLEFT," which found lyrical inspiration in Alabama artist Rayvon Pettis.

To bring those sounds to life, Bradbury tapped close friends and band mates Chase Ballenger, Preston Cochran, Ryan Sobb and Scottie Prudhoe to join him in the studio. Kari Pennise, Irakli Gabriel and Cameron Carrus also contributed to the LP, while Cochran, Prudhoe and Sobb co-produced Artvertisement alongside Bradbury.

"I wanted people that were like, 'Holy shit, I have the chance to play on a record that is going to be out there,' and understand what the weight of that means," Bradbury says. "I love studio musicians, but what interests me is, does someone play with a sense of urgency? And they interested me."

While Artvertisement was written and recorded months beforehand, Bradbury's June 2020 diagnosis of obsessive-compulsive disorder and PTSD has reshaped his conception of the album. After receiving his diagnosis from Vanderbilt, Bradbury spent two months in residential treatment in Oconomowoc, Wisconsin, where he underwent rigorous, often emotionally painful therapy to, as he puts it, "work to become a functioning human."

"The thing that a lot of people don't understand is that there is a complete misrepresentation of OCD," he says. "The suicide rate of people with severe OCD is twice the national average, because you just live with it. It never goes away."

Upon finishing treatment, he headed straight to Mahwah, New Jersey to spend precious time with his grandfather, Joe, who passed away from skin cancer in October 2020. "He's the only person I felt like understood me," he says of his grandfather. "We have the same brain. We have the same mental conditions. He would always tell the hospice nurses, 'That's my grandson. He's the famous one. He has a record contract!' Knowing that he died thinking I was successful, that's all I ever care to get out of fame."

Bradbury then returned to his home in Nashville's Madison neighborhood, where he works on bikes and mopeds in his front yard and has close friendships with many of his neighbors. His house is strewn with paintings and sketches, instruments and records, and is also home to Bradbury's beloved pets: two dogs, Enzo and Albert, and two cats, Bobby Kennedy and Kika keep him company.

While music is still his primary focus, Bradbury has leaned into working on visual art, which, like his music, draws out both the darkness and the humor of the everyday. He was first encouraged to draw and paint while in residential treatment, and found that doing so is one of the few things that quiets his mind.

"I was having a really severe panic attack and they were like ‘You have to break away from being hyper-focused, and just do anything,'" he explains, holding a sketch pad with green ink scribbled across the page. "So I just scratched on this piece of paper, and it looked like a brain. Then I was like, ‘Well, fuck it, if I’m going to be doing this and I’m going to be seeking treatment, I might as well teach myself something new.’"

His art aligns aesthetically with his music. His portraits are abstract, stretching and warping facial features in service of communicating emotion, while his smaller sketches veer more toward humor and commentary. He sells his art on a "pay what you want" model, explaining that he is as happy to sell a painting for a nickel as he is for five hundred dollars.

It may not be the kind of financial model that lands him a high-rise office overlooking downtown Nashville, but that's always been the antithesis of what Bradbury is about. "Do no harm but take what you need," he says. "Holding on to success, holding onto money… What does it matter? We’re all going to die someday."