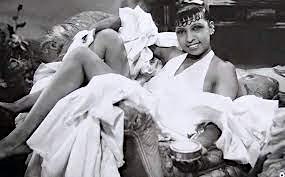 Advertisement
Visit The Gantt for a monthly featured film screening in The Classic Black Cinema Series! Witness the rich history of Black filmmaking.
About this Event

Zou Zou is a French film by Marc Allégret released in 1934. Josephine Baker, who plays the title character, was the first black woman to play the leading role in a major motion picture.

Zou Zou (Josephine Baker) and Jean (Jean Gabin) were children adopted by Papa Melé (Pierre Larquey) and grew up as performers in the circus that he ran. As adults, Jean works as an electrician and Zou Zou, who is in love with Jean, works at a laundry. When Jean is accused of M**der, Zou Zou becomes a star in a musical show to earn enough money to help clear his name.

About the Classic Black Cinema Series

Specifically designed as a vehicle to expose the community to the vast artistic value black film has had throughout the years, the goal of the film series is to appeal to as diverse a population as possible and further the appreciation of Black cinema.Curator and host, Felix Curtis, came to Charlotte from the Oakland/San Francisco Bay area where he curated The San Francisco Black Film Festival and Black Filmworks, the annual film festival component of the Black Filmmakers Hall of Fame, where he later served as Executive Director.

Please note that you can register at no charge, but will have to pay the price of admission to the Gantt (free for members). Visit here for hours and admission.

Note that this event is for ages 18 and older. For directions and parking, click here.