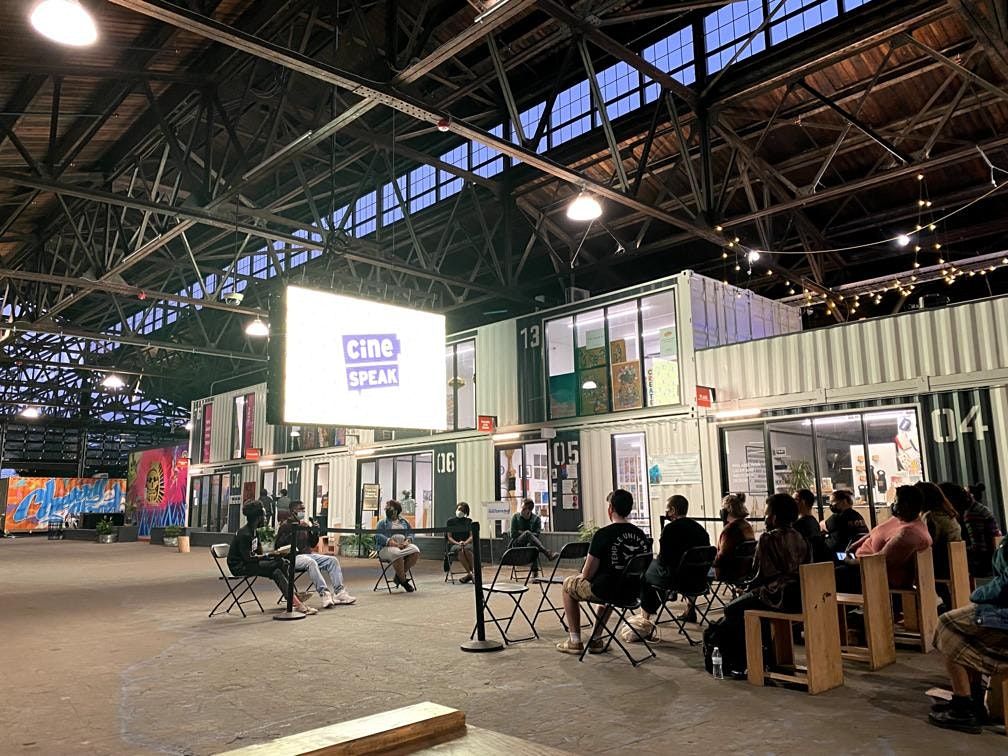 Advertisement
cinéSPEAK presents an even of indie films and accompanying performances by Philly-based artists —as part of Tiny Room for Elephants 2022.
About this Event

cinéSPEAK is delighted to partner with on their upcoming 2022 festival!

This program is produced thanks to generous on-going support from Independence Public Media Foundation.

Donations to support our current and future work—including our West Philadelphia brick-and-mortar cinema project (coming in early 2023!) are welcome :)

This is a seated screening located in the center of the Pier in front of the jumbo-tron. The Pier is a semi-outdoor / covered public space.

On Thursday May 5th, we are announcing a call for short films and DJs/musician/composers that are open to remixing and live-scoring their films for a live audience. Ideally, the filmmaker/composer pair should be familiar with each other’s work, with a previous collabora​​torship under their belt.

‘I’m a jawn through and through, Philly native, 215 youngboul inspired by the language, shapes, sights, and sounds that course through me and are a part of me because of where I grew up, what grew me up, what I grew up. Planted, we are, in one city, small town, or another; specifically we are to the lands we might call home or we might call a friend. I'm inspired by the way places shape us and how we in turn shape them. In 1974 James Baldwin, in a prelude to his novel If Beale Street Could Talk, remarked:

“Every Black person born in America was born on Beale Street, born in the Black neighborhood of some American city, whether in Jackson, Mississippi, or in Harlem, New York. Beale Street is our legacy.”

So, I'm thinking about the blues as not just the songs that we sing, but as the lives that we live — and as time changes how the things we think we know change with us, and are remixed into everything we might need to become. This collaboration with TINY ROOM FOR ELEPHANTS celebrates the joy of remixing, a hip-hop technology that says I am from that place and I can also build myself another one —while honoring where I come from. From Philly, to Detroit, to Georgia, to Mississippi, to Oakland, to Bahia, to Accra. Here's your chance: to make the city loud, with your own music.’

ABOUT THE VENUE — CHERRY STREET PIER:

Cherry Street Pier is a year-round, mixed-use public space on the central Delaware River waterfront. Built into the shell of a century-old municipal pier, it is a reflection of Philadelphia today—creative, diverse, historic, adaptable, and inspired.

We are a Philadelphia-based cinema organization that engages diverse audiences through our independent, repertory and foreign film programming; creating space and centering the stories of individuals and communities that are often underrepresented in mainstream cinema.

We promote community togetherness and global understanding by engaging film enthusiasts while cultivating the next generation of discerning moviegoers; encouraging people to demand social justice both on-screen and throughout society.

LEARN MORE ABOUT OUR MICROCINEMA PROJECT—>

STAY IN THE LOOP—> https://bit.ly/cinéSPEAKMail