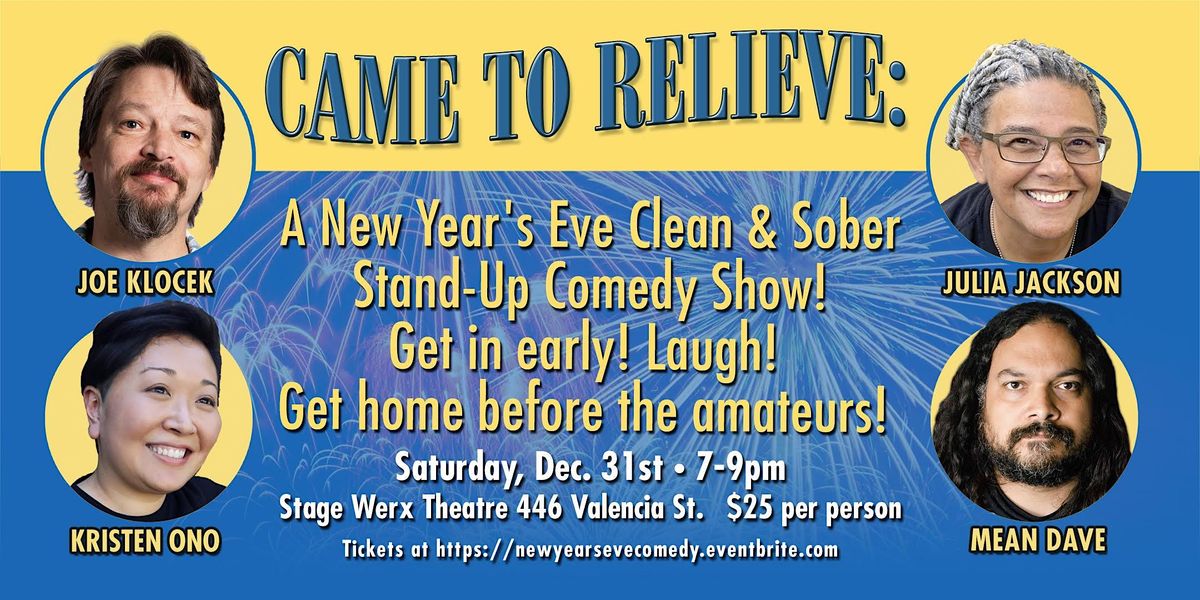 Advertisement
Being clean and sober doesn't mean we stop having fun. So, we put together an early show to celebrate the New Year with laughter.
About this Event

A little dark, a little weird, a lot of burritos. Kristee Ono is a San Francisco based stand up comedian exploring depression and food obsession with an unwarranted optimism entertaining enough that no one has asked her to stop as of yet. She is a host and co-creator of KALW Into The Fold, an exploration of burritos and burrito people. She is the co-host of Mental Health Comedy Hour, where comedians use humor to destigmatize mental illness.

Mean Dave is a regular at Cobb’s Comedy Club, Punch Line in SF and Sacramento and Laughs Unlimited and has opened for headliners such as Judy Tenuta, Big Jay Oakerson, Eddie Pepitone, Dan Soder, Jay Mohr, Allan Havey, Neil Hamburger, Dean Delray, Tom Rhodes and most importantly, Barry Sobel. Most of Dave’s life has been littered with utter disappointment and flat-out betrayal that only a sarcastic, cynical sense of humor can remedy. Hopefully this information helps you in your decision as to whether Mean Dave’s comedy will help you attain laughter as you progress through your futile existence. Many fans agree with this statement, “Mean Dave has made us laugh, cry, and cringe! He is honest and cynical, and such a sweet person.”

Julia Jackson is a comedienne and solo artist known for her biting social commentary, as well as actually biting audience members from time to time. The Milwaukee native takes on all topics, from politicians to the NFL. This rising comedy star has performed at the Fringe Festival in Edinburgh, Scotland, and was a Semi-Finalist in the San Francisco International Comedy Competition. Her solo performance piece “Children Are Forever: All Sales Are Final” won the Best Non-Fiction Show at the 2016 United Solo Festival in New York. Julia has appeared in the film “From X to Z”, and has worked with Robin Williams, Dana Carvey, and Paul Mooney.

Joe is a square peg in a round hole sort of guy. Raised a midwesterner, so he has manners, but living in San Francisco for 20 years, so he thinks he's better than you.  Joe does two things great- tells stories and talks to the crowd. Joe currently runs two monthly shows in San Francisco. At Cobbs Comedy Club, his game show, “Get It!?” Is becoming the next big thing and The Punch Line, Joe Klocek and Friends. Joe had a two month "comic in residency" at the first comedy club in Shanghai, China.

Joe has been featured on NPR's, "Snap Judgement" and has also appeared on Comedy Centrals, "Live at Gotham" NBC's, "Last Comic Standing" and was a commentator for the Emmy award wining documentary, "A Bridge so Far” Co-Creator of the critically acclaimed storytelling show, "Previously Secret Information"  Joe has also been a runner-up in the "San Francisco International Comedy Competition" and the "Seattle Comedy Competition." Voted "Best Comic" in the 2011 SF Weekly Readers Poll. Joe has performed at every major comedy club in the country, including Alaska, and is a regular on the Bay Area Comedy Scene.