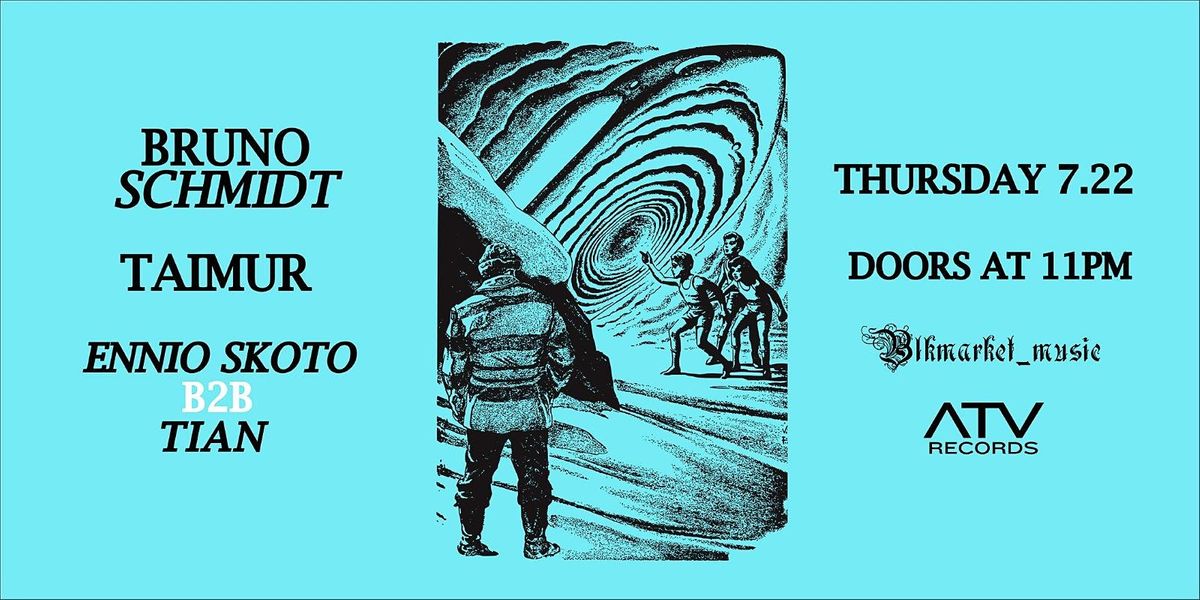 Blkmarket Music showcases undeniable talent in the burgeoning underground music scene with quality and fervor. Ahead of the game since 2006.
About this Event

The Berlin-based Brit Bruno Schmidt has been steadily building a name for himself over the past few years as both a skilled DJ and producer. On record, his productions, which have appeared on Spinning Plates and Toi Toi sub-label Subsequent, are tight, slick and minimalist in approach. Behind the decks, the same essence and understated character seeps through, with a UK-schooled flare and inventive, precise turntablism.

The young musician's journey began at university in Leeds, where he became resident for long-running local event series Louche, before relocating south to London. It was in the capital that he truly found his feet, inspired by new surroundings and faces—Andrew James Gustav and Gwenan to name two, with whom he established the Hifi party series. Throughout it all, he’s also been a devoted proponent and programmer of Meadows in the Mountains, helping to take the likes of Binh and Francesco Del Garda to the Bulgarian countryside festival.

Now, from his new home in the German capital, Schmidt continues confidently along the path he’s been treading for years.

As head of buying and distribution at Halcyon Records from 2008 until mid-2014, Taimur’s work helped lead the resurgence of the local Brooklyn scene. With twelve + years of history and accolades for helping to revive one of the world’s most important dance music scenes, Taimur and Blk|Market Membership hold an esteemed position as architects of New York’s contemporary scene.

On the strength of these accomplishments, Taimur has devoted himself full-time to his DJ & production career and currently resides in Miami. He launched his record label Blkmarket Music which features releases by Reade Truth, a 2 part Craig Richards's lost tracks with remixes, a collab between Taimur with Miami electro legend Gosub, 2 T.A.O (Taimur.Amo.Ostara) Ep's 'Enter your Mind' and 'Return to Life' and more. The latest release just dropped by Toronto's Hypnotic Mindscapes trio Payphone and is out now worldwide on the label.

Between his label, events under his Blkmarket Music banner, he has also opened up his new vinyl emporium with his wife Ostara in Miami. T Bag Records was born on April 10 2021and is a vinyl shop that is dedicated to underground dance music of many genres.

Ennio Skoto is a House & Techno Dj/Producer based in Miami. His music and live sets are well known for his signature sounds with energetic bass-lines, fast-paced acid and organic grooves. Ennio has released music in labels such as Get Physical Music, Le Jour Me Nuit, Island Beats Music, Dushe Label, just to name a few. During his career he has performed in Miami venues such as The Electric Pickle, Floyd and festivals such as Miami’s finest III Points and House Of Creatives. Internationally, Ennio has performed in Ecuador’s Lost Beach Club, The Cave (Dominican Republic). During his trajectory, Ennio has shared stage with Top Artists such as Bambounou, Sebastian Mullaert, Archie Hamilton, and many more. An artist that always brings to game his tuneful novelty and cleverness. Follow, listen, savor; art is in the making.

Christian Jimenez aka Tian is a DJ from El Paso, TX raised in Cd. Juarez, Mexico. A vinyl enthusiast from young age, his selections and mixing abilities have given him the opportunity to play at a variety of notable venues in Miami. He recently made his first international debut at Soles lounge bar in Punta Cana, Dominican Republic.