DJ Aphrodite has been a mainstay of the Worldwide Rave Scene since the early nineties. For each country around the world with a Drum & Bass scenes, DJ Aphrodite has produced anthems. 'Ganja Man', 'King Of The Beats', 'Style From The Darkside', 'All Over Me', 'Summer Breeze', 'Dub Moods' and 'Stalker' from the infamous record shop scene in movie 'Human Traffic', 'Mash Up You Know', 'Booyaa' and 'We Enter', to name just a few solo compositions have all graced Junglist and DnB playlists everywhere.

Starting with Urban Shakedown and together producing the huge rave anthem 'Some Justice' Aphrodite became a prolific producer being an integral part of creating a string of Jungle and Drum & Bass Classics of which more than a dozen had UK and European mainstream chart success. Throughout the millennium Aphrodite's Artist and DJ Mix albums notched up half a million sales worldwide and his popularity as one of the world's Drum & Bass icons was forged with consistent performances and now delivering multiple 4-deck mixing to all crowds be them 30,000 or 300 strong. Aphrodite's travels as one of the world's favourite Jungle and DNB artists, playing a mix of exclusives, special versions, new releases, DJ promos and self-indulgent classics has seen him perform all over the United Kingdom, Europe, North and South America, Asia, Africa and Australasia.

From the mid-nineties, Aphrodite's use of stripped-back, high-energy bass and beats, well chosen hip-hop and reggae samples in all the productions he's part of has made him one of the founding fathers of jump-up Drum & Bass. Aphrodite Recordings and his partnered labels Urban Shakedown and Urban Takeover alongside his production partner, DJ legend Micky Finn, have helped plant the roots of a style which still dominates the landscape of Drum & Bass around the world. Aphrodite's irresistible blend of rolling beats and heavy danceable baselines, have made him a remixer of choice for artists of all stature and genres. NWA , Tribe Called Quest , Beverley Knight, Freestylers, Afrika Bambaataa, Nine Inch Nails, East 17, Simon Bassline, Alibi, Smoke City, Moloko, Biga Ranx, Meredith Brooks, Mary J Blige, FrouFrou, Jem, NG3, Vangelis, Congo Natty, Holly Valance have all benefited from a tear-out Aphrodite remixes.

Aphrodite co-production Urban Takeover and Shakedown tracks and remixes with Micky Finn have also become long standing DnB anthems. 'Bad Ass', 'Arsonist' and 'Some Justice' are all in DJ Playlists today. Remixes for The Jungle Brothers, Black Street's 'No Diggety', 'Luniz' 'I Got Five on It', Moby, Yazz's 'Abandon Me', Apollo Four Forty, Demolition Man's 'Fire', Barry Boom and Alabama 3's 'Woke Up This Morning' (theme tune for 'The Sopranos') are all classics in their own right. Aphrodite's name came from Acid House parties put on by himself and friends in the Midlands whilst at University. The brand became the DJ name then stuck as house became hardcore became jungle became drum & bass.

With so much influence on the whole DnB genre, Aphrodite's DJ and production career continues to take him global to all types of events. His multi-continental bookings diary, which includes some of the biggest events in the scene is constantly growing. DJ Aphrodite has played the likes of Glastonbury, 'Let it Roll', Boomtown, 'Pirate Station', 'Burning Man', 'Electric Daisyland', 'Love Parade', Creamfields, Bestival, Reading, Leeds, V-Festival, Lowlands, 'Amsterdam Dance Event'. 'Miami Conference', Pukkelpop and Imagination festivals.

Hitting the three decade mark in the game, with multiple artist albums, a bag full of exclusive dubs, and a mass of air miles, DJ Aphrodite knows rave music inside out. As one of the godfathers of drum 'n' bass, he's more than capable of making crowds go crazy of all ages which has cemented his reputation as being a legendary DJ within a worldwide rave-scene.

S﻿PECIAL GUESTS TO BE ANNOUNCED

Element Bistro Open for Drinks and Dinner Starting at 6:PM

By Purchasing a ticket, or attending Myth Nightclub, you agree to the Covid-19 Terms 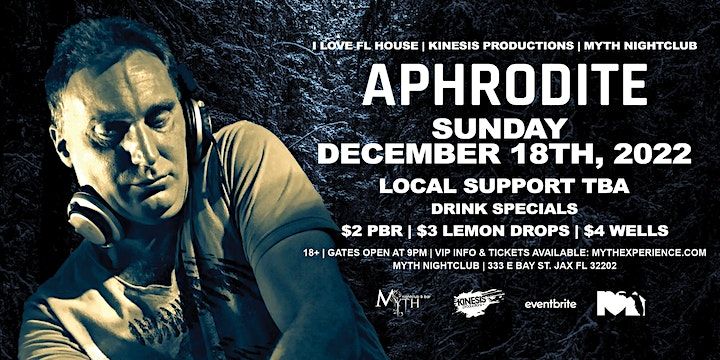