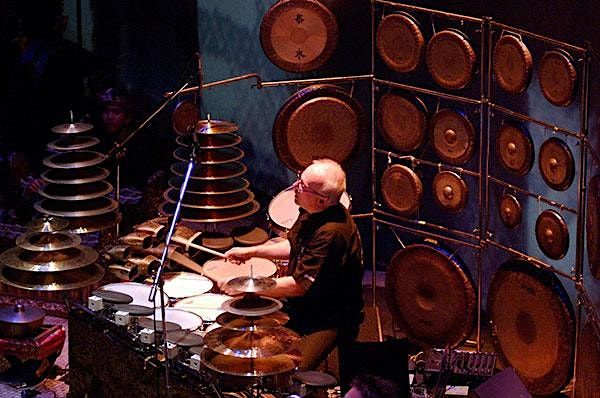 Italian American composer, percussionist and multimedia artist Andrea Centazzo has been for 40 years a bold explorer of contemporary art. In the early 70’s he introduced a new concept of percussion playing, migrating from the Free Jazz to a new form of improvised music, defining itself.

In the late 70’s, Centazzo was one of the founders of the NY Downtown Music Scene with his seminal collaboration with John Zorn, Tom Cora, Eugene Chadbourne, Toshinori Kondo and others, documented in many albums.

He left the improvised music scene in 1986, moving shortly after to Los Angeles, CA and dedicating himself to composition and video making. Centazzo authored 3 operas, 2 symphonies and almost 500 compositions for all kind of ensembles, plus many award winning video films.

Back to live performing in 1998, he created solo concerts and solo multimedia concerts, playing live in synch with videos that he shoots and edits.

His last project “Einstein’s Cosmic Messengers” has been produced by LIGO, Caltech and NASA.

The Library of the University of Bologna at DAMS, just recently dedicated to the composer the Fondo Andrea Centazzo where all his works are collected and made available to students and scholars.

"Cycles of Life is a solo multimedia concert bringing to the audience several aspects of Andrea Centazzo 50 years long musical research. This concert, once again, blends his percussion with electronics, computer sequencing, digital sampling and his special videos, giving to the listener the emotion of a new sonic adventure in jazz, world and contemporary avant-garde music.The program is a remake of some of the most significative Centazzo’s works of the last few years."

Noa Even is a versatile saxophonist dedicated to the creation of new music through close collaboration with other artists, improvisation, and most recently, composition. She embraces the challenge of incorporating unfamiliar elements into her work on a regular basis. The process of navigating new territory and synthesizing ideas yields immense personal and artistic growth.

Noa began improvising as a doctoral student and has since continued developing her skills in that area. As an improviser, she is interested in iteration, speech patterns, and other forms of vocalized communication, and exploring the idiomatic, tactile qualities of the saxophone.

Percussionist Scott Verrastro utilizes a plethora of sticks, brushes, bells, shakers, cymbals and gongs, bowed metal, contact mics, and household items -- in addition to a traditional drum kit -- to coax a wide palette of sounds. Verrastro received a degree in music literature from Northeastern University in Boston and continues to examine many forms of music, including all styles of improvisation and traditional folk.