"The Intrusion of the Digital?" - Distinguished Speakers Series at the CDW 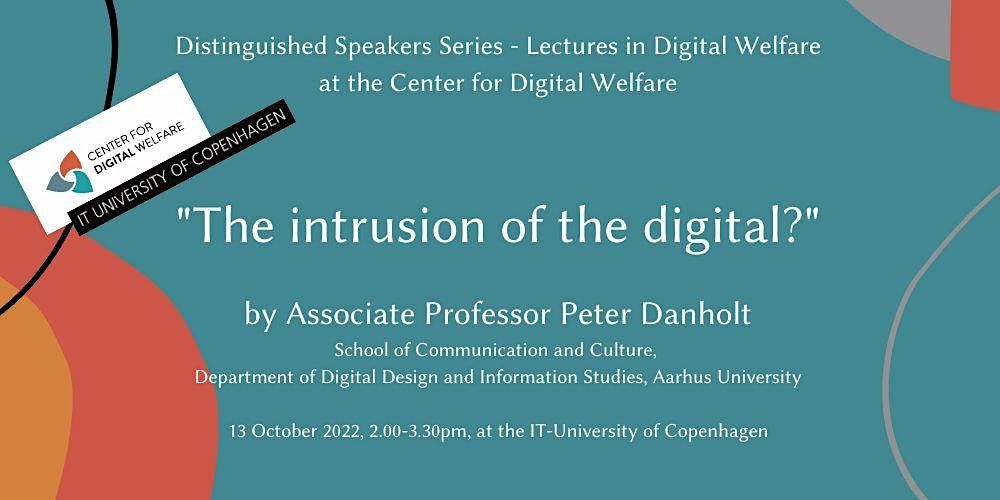 Advertisement
The CDW proudly presents another distinguished speaker in our row of lectures on digital welfare at the IT-University of Copenhagen.
About this Event

We are on a daily basis met with the consequences of data and the digital. Digitization has changed the world at large and especially contemporary western societies substantially and continues to do so in a manner and pace that very few, if any, are able to fully grasp. We thus partake more or less willingly and consciously in the unfolding of a present and a future in which we in various ways are both subject to and active participants in the increasing digitalization and datafication of society. Consequently, and for good reasons, the digital has become a ‘matter of concern’ and a debated issue. An issue ripe with scandals, mishaps, crooks, vigilantes and heroes. This is also implicated in different regimes of governance. We have the ethically concerned and democratic and citizen-centered politics of the old world (Europe), the libertarian and market driven (US) and the state governed totalitarian (China, Russia, etc.) and obviously hybrid versions in between. Furthermore, the digital is not ‘one thing’, one ‘tendency’ although articulated as such at the beginning of the 2000. The digital comes in many shapes and sizes and with hugely different effects. Therefore, by inspiration of the work of Isabelle Stengers and her notion of the ‘intrusion of Gaia’ (the fact that we today due to climate changes are faced with a situation in which humankind is dwarfed by planetary forces), I want to propose the notion of the ‘intrusion of the digital’ and in a similar way, suggest that we are faced with a condition where we are dwarfed by ‘the digital’. The intrusion of the digital implies other ways of thinking and acting than those implied in both political, tech. developers and critical/deconstructive approaches to the digital. In short it entails that the digital is not always and only thought of as an instrument of (some) human will, designed by and for (some) humans and accordingly something supposedly controlled by (some) human agency. I do not mean to suggest that to think in terms of the intrusion of the digital overcomes the trouble of the digital, nor that it is ‘better’, but simply that we should cultivate different ways of engaging the digital alongside one another if we are to cope and ‘live better’ with the digital.

P﻿eter Danholt is Associate Professor at the School of Communication and Culture at the Department of Digital Design and Information Studies. Peter is broadly concerned with studying empirically how human beings, technologies, materiality and discourse are interwoven in mutually transforming processes of becoming. More specifically, Peter studies the design- and use practices of welfare technologies e.g. self monitoring devices, telemedical technologies, and robots in care and their effects focusing especially on design approaches such as Participatory Design and Userdriven Innovation.

A﻿bout the Center for Digital Welfare

During the past decades, states worldwide and their citizens have undergone digitalization to varying, but most often vast degrees. In the case of the Nordic countries, the digitalization process has entailed a thorough reworking of the provision of welfare services, in many ways transforming the basic premise for individuals to access privileges and take part in the welfare society. The CDW was established to study the process and its consequences as a collective of interdisciplinary researchers and industrial practitioners exploring what it means to govern and live in a welfare society post digitalization.

If you want to learn more about the Center for Digital Welfare, please sign up for our newsletter here: cdw.itu.dk/Sign-Up

If you have any questions or concerns about this specific event, please reach out to: [email protected]