Admit One presents: Astronomar & Bot in the Loft 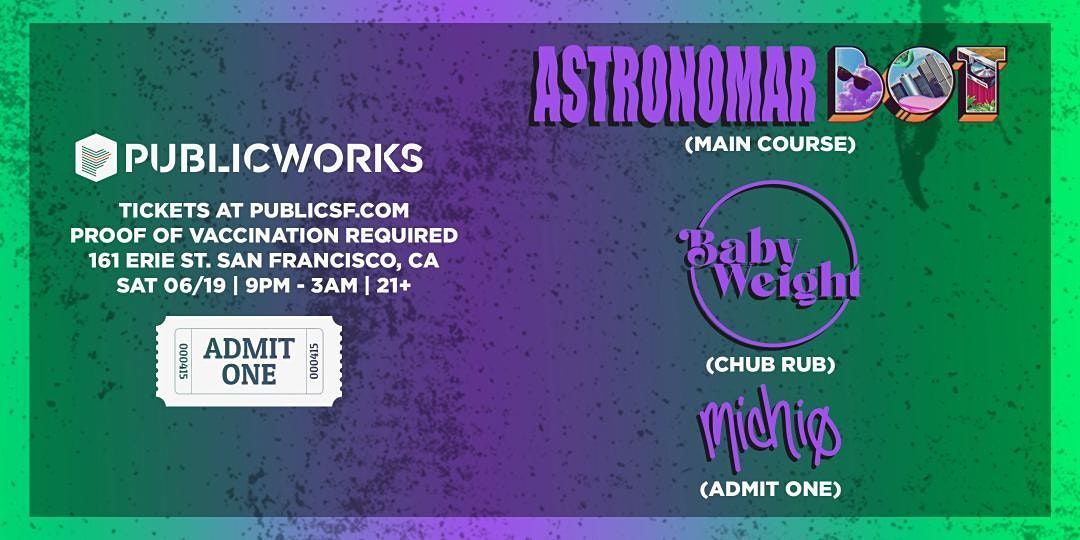 Admit One presents: Astronomar & Bot in the Loft
About this Event

Proof of full vaccination required at check-in along with ID. This can be your physical vaccination card, or photo on your phone.

Hand sanitizer is available throughout the dining area. Please see host upon Entry.

Astronomar has been a stalwart in the US club scene for many years lending his production efforts to labels like Mad Decent, Fools Gold, OWSLA, Dim Mak, Slow Roast, BNR Trax, Enchufada, Ministry of Sound, Top Billin and his own label Main Course (plus remix work for countless other imprints) and gaining support from many of the industry’s leading tastemakers like Diplo, Skrillex, GTA, Clockwork, Congorock, A-Trak, Zeds Dead and Martin Garrix, just to name a few

It’s the sound of a knocking thud on your door the same night you watched a horror movie. It’s the feeling of waking up from a dream in which you time traveled backwards and forwards simultaneously. It’s that oddly comfortable uneasiness in realizing the future is now but you may not be 100% ready for it. Italy-born LA-based Andrea Fratangelo, known as Bot, makes the sounds of tomorrow while keeping in mind the styles and methods of those before him. His style, which some may say shaped those of his label with Astronomar and Neoteric, Main Course, have a distinctly club influence, but not in the way you may think when hearing the word “club.” He is very much in a lane all his own, though the sounds of his influences and past works are very much readily apparent throughout.