A Night of Crime: Will Dean and Joseph Knox 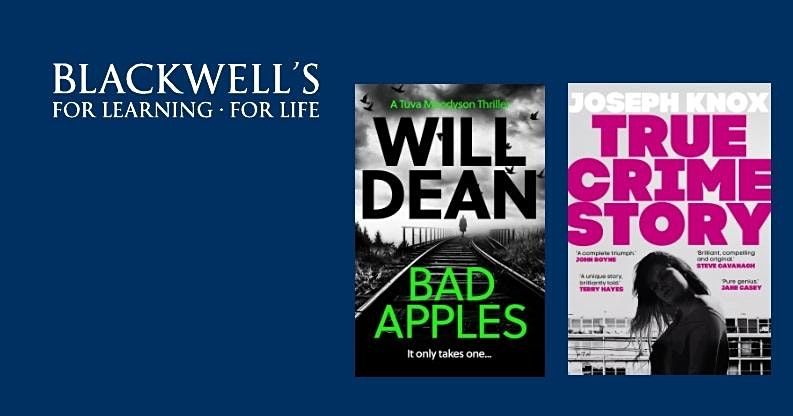 Two of our favourite modern crime writers, Will Dean and Joseph Knox, discuss their latest novels BAD APPLES and TRUE CRIME STORY
About this Event

Join us for an evening featuring the very best of modern crime writing. Will Dean and Joseph Knox will be talking about their latest novels BAD APPLES and TRUE CRIME STORY. The event will be hosted by Rob Parker.

It only takes one...

A resident of small-town Visberg is found decapitated

A race against time

As Visberg closes ranks to keep its deadly secrets, there could not be a worse time for Tuva Moodyson to arrive as deputy editor of the local newspaper. Powerful forces are at play and no one dares speak out. But Tuva senses the story of her career, unaware that perhaps she is the story…

Bad Apples is the fourth Tuva Moodyson novel and her most terrifying mystery yet. Set in Sweden's Halloween season, when the forests are full of elk hunters and the town of Visberg is thick with the aroma of rotting fruit, Bad Apples is a thrilling introduction to the series and a heart-stopping rolercoaster for die-hard Tuva fans.

Will Dean grew up in the East Midlands and had lived in nine different villages before the age of eighteen. His debut novel, Dark Pines, was selected for Zoe Ball’s Book Club, shortlisted for the Guardian Not the Booker prize and named a Daily Telegraph Book of the Year. The second Tuva Moodyson mystery, Red Snow, won Best Independent Voice at the Amazon Publishing Readers' Awards, 2019, and was longlisted for the Theakstons Old Peculiar Crime Novel of the Year 2020. His third novel, Black River, was chosen as Observer Thriller of the Month. Will Dean lives in Sweden where the Tuva Moodyson novels are set.

In the early hours of Saturday 17 December 2011, Zoe Nolan, a nineteen-year-old Manchester University student, walked out of a party taking place in the shared accommodation where she had been living for three months.

She was never seen again.

Seven years after her disappearance, struggling writer Evelyn Mitchell finds herself drawn into the mystery. Through interviews with Zoe's closest friends and family, she begins piecing together what really happened in 2011. But where some versions of events overlap, aligning perfectly with one another, others stand in stark contrast, giving rise to troubling inconsistencies.

Shaken by revelations of Zoe's secret life, and stalked by a figure from the shadows, Evelyn turns to crime writer Joseph Knox to help make sense of a case where everyone has something to hide.

Zoe Nolan may be missing presumed dead, but her story is only just beginning.

Joseph Knox was born and raised in and around Stoke and Manchester, where he worked in bars and bookshops before moving to London. He runs, writes and reads compulsively. His debut novel Sirens was a bestseller and has been translated into eighteen languages. The Smiling Man and The Sleepwalker are the second and third books in the series. True Crime Story is a standalone.

Both books (and the authors' backlists) will be available to purchase on the night and Will and Joseph will be signing copies after the talk. If you would like a signed copy but cannot make it to the event, please contact us on 0161 274 3331 or [email protected] and we can arrange this for you. Covid-19 precautions will be adhered to in order to ensure the safety of of our attendees, authors and booksellers.